As I am in the process of researching for the fourth volume of In search of English holy wells and healing spring which will cover Lincolnshire, I decided to combine a visit to the local studies centre in Lincoln with some field work. There are six sites around the city, of which I had time to explore three. 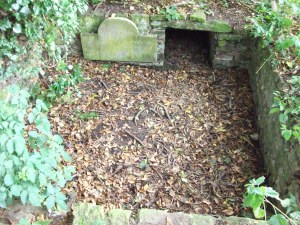 The first of these is a bit of an enigma. Called Ann’s Well, one would assume that the well’s true dedication was St. Ann’s well, but although this is likely it is not confirmed. It lies in the grounds of Branston Hall, now a hotel. I arrived at the hotel and found the desk staff unaware of the site at first. Then she asked one of her other collegues and they appeared to know of the site and gave me directions along to the second lake, cross the cascade and near the remains of an ice house. I easily found what I thought was the cascade. It was not easy to find. Once I had roughly ascertained its location, confirming by asking a man tending his horses nearby who knew it, I attempted to access it! Being enveloped in briars, nettles and thistles this was not very easy. Ducking under the overgrown thorn tree I was greeted by a brick and stone-lined six feet square chamber with the rusty remains of a sluice gate attachment. The site resembles a cold bath and similar structures exist, but the lack of steps into the water may suggest otherwise. Close to it is a small stone slab which reads:

“Clear may thy waters ever flow, Nor Gusts of Ruffling Tempest Know, Pure and Unsullied as the fair, who emblematic name you bear”. 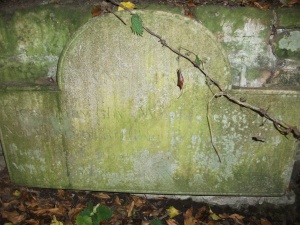 The site is rather forlorn and largely forgotten.  The spring head and chamber are often bone dry in the summer, although flow is perceivable in the winter months. In a work for Lincolnshire Past and Present, Parkes (2000) suggest that it was a member of the Vere Berte family, of whom one was Lady Anne. It is possible that the spring was improved in her memory by a devoted Lord Vere Berte in the 1750s when a nearby Ice-house was constructed. However, why was it constructed in this fashion and so far away from the house? The presence of an old venerable hawthorn would excite new age antiquarians as evidence of a much more ancient origin for the well.

Perhaps the smellest of all the sites, just upstream (fortunately) from Lincoln’s sewarage plant is Holy Well recorded as Hallow-well  in around c.1630. The site appears to have been holy by its association with the Gilbertine canons of St Catherine’s Priory. It is recorded that in 1306 they begun a conduit to Lincoln from a well in Canwick which Mills and Mills (1996) believe to be the holy well.The site is probably recorded in 1771 and 1778 as a Spaw. Mills & Mills (1996) undertook some detective work using the names conduit rundle and the springs to locate the well successfully. The apparent site is a two foot square Victorian brick chamber from which the water issues from a pipe. I had less success, fifteen years on, and did not successfully find the brick lined chamber but did find a pipe through which a considerable flow could be seen and there were bits of old brick around. How I found it I am not sure, the OS was not much help and I used by intuition and headed for an area with an increase in ivy covering and that was it. 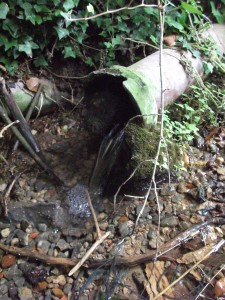 The last site, St. Margaret’s Well or Roaring Meg is similarly forlorn, but at least could be traced without being covered by stings and scratches. To the north of Lincoln off the Nettleham road. The site could be considered a very significant spring being associated with the courses of a Roman aquaduct. The spring’s other name related to the loud sound. It still arises largely unheralded in a marsh off the Nettleham road, but in the local supermarket is a large piece of Roman aquaduct and a plaque but fails to mention the spring! Perhaps its in the way! 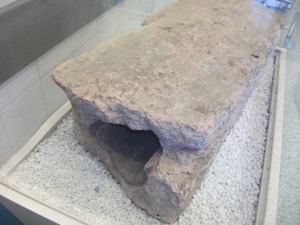 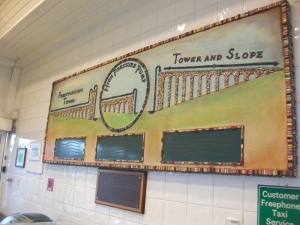 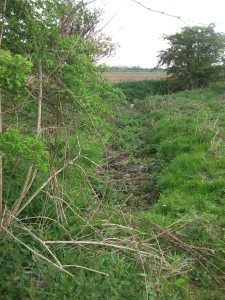 More can be read in the book: