In my searches for holy wells, here are ten of the oddest places I have found them. If you know any odder ones let me know. I’ve hyperlinked to megalithic portal for most were a page exists. Note due to the locations some of these sites are on private land.

Under a church. Much is spoken of the Christianisation of pagan springs by siting churches over them but the evidence is not common, St Ethelbert’s Well in Marden Herefordshire is one such example, located in a room to the west end of the nave, existing as a circular hole in the carpet mounted by a wooden frame.

In a bridge, Bridge chapels are a rarity in England and so were bridge holy wells and as far as I can tell of those said to exist at Barking in Essex and possibly in Nottingham at Trent bridge, only Biddenham’s Holy Well still survives in an ancient bridge, probably dating from the 17th century its worn steps lead down to a chamber beneath the bridge, although access is hampered by a locked gate.

Under my kitchen. A visit in search of St John’s Well near Retford, Nottinghamshire reveals a subterranean rectangular stone lined chamber designed to be a plunge pool for body immersions beneath a trap door in a person’s kitchen. More can be learned here or in Holy wells and healing springs of Nottinghamshire.

In the shadow of the tower blocks. Urbanisation has a tendency to sweep away anything inconvenient and messy like an ancient well and have in conduited away in pipes or just filled in, luckily one of oldest of Derbyshire’s holy wells (or at least with one of the oldest provenances) survives in a juxtaposition between some older housing and some tower blocks. Vandalised over the years and currently protected by an unsightly metal cage it St. Alkmund’s Well, flows on at the point where his body is said to have rested on the way to his shrine (supposedly in the city museum)

On a golf course. Surprisingly, despite what you would think would be an inconvenience, a number of holy wells arise between the bunkers and fairways of the countries golf courses. In Kent we have St Augustine’s Well at Ebbsfleet, Oxfordshire’s Holy Well at Tadmarton, and Jesus’s well at Miniver, Cornwall. My favourite, although it may not be a holy well per se (deriving from O.E holh or hol) is Holwell on Newstead Golf Course, Nottinghamshire. A natural fern, moss and liverwort adorned cave whose sweet waters are still available via a cup attached to a metal chain.

In the grounds of a school. As long as they don’t fill them with paper aeroplanes and rubbers, wells can survive in school estates well. The best example is the Lady’s Well located within the Bedgebury School Estate, a large sandstone structure has been raised over the spring either to celebrate Our Lady, original landowner Vicountess Beresford or perhaps a past Bedgebury School Headmistress!

Amongst the rock pools on the beach. Although now dry, St Govan’s Well and its associated Chapel are undoubtedly the most atmospherically positioned of any of this list. A small stone well house covers the spring which has either dried or being filled up by too many pebbles.

In a cave. Perhaps the most atmospheric of holy wells is the Holy Well of Holy Well bay near Newquay Cornwall. A large sea cave reveals a magical multicoloured series of troughs made by a natural spring that has dripped its mineral load over the rocks and formed a perfect immersion set up. Its origins are linked to the resting of St. Cuthbert on his way to Durham. Crotches were left on the beach outside by healed pilgrims.

Restored in a new housing estate. Developers of new estates are not always sympathetic to history perhaps and certainly not water history, but the designers of De Tany Court in St Alban’s took good advice and preserved the newly discovered St. Alban’s Well, lost for decades in the grounds of the nearby school’s playing fields, in their new housing estate and made it a garden feature. 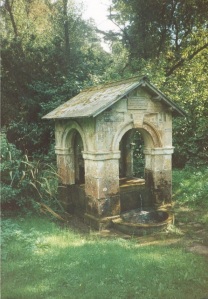