The Lord’s Well Burton on Trent

In researching the Holy wells and healing springs of Staffordshire, my research brought me to Lord’s Well (SK 220 230) at Burton on Trent. It appears to have been called variously God’s or St Anne’s Well. This is found below Sinia Park House, a black and white wooden building set high on a hill above the Town. A footpath passes from the end of Lord’s well lane off the Shobnall lane, second turning on the left after the A38, however the causal visitor would be unable to see the well and the grounds are surrounded by tall trees and the well lays on private land. However, I was fortunate to be granted an opportunity to investigate the site by the present owners of the house, Mr and Mrs Newton.

They took over the house and have done a fantastic job repairing this noted building believed to have been granted to Burton Abbey, the original house appears to have been used as a grange for retreating monks who were undergoing blood-letting! It seems very likely they would have used the spring, but no firm evidence exists of this. At the Reformation, the land was sold to the Pagets who used the house as a hunting lodge. The present structure dates from the mid to early 1700s, probably as a bath to ease pain after a day’s hunting. 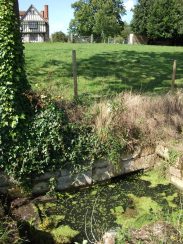 Certainly the structure appears to be a plunge bath, approximately nine feet by six feet made of squared sandstone blocks. There is a series of six or so steps to the west end of the bath. The spring appears to arise to the north in a small chamber, which according to Mr. Newton is blocked by a large rectangular stone. Over the chamber is a small plaque carved into the stone. This appears to have had a carved inscription but it is difficult to read, Mr and Mrs Newton said it was decipherable when they told over the estate and indeed took a photo but have mislaid the photo! 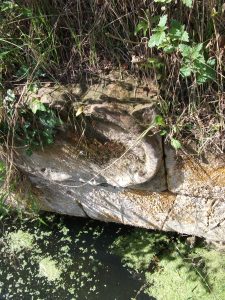 Mr Newton informed me that when he pumped out the well he uncovered a large number of stones which were covered with carved graffiti, most of these dated from the late 1800s and presumably record inhabitants of the house. He also revealed two metal hooks which look like the remains of a structure which help a sluice gate enabling the bath to fill so it could be used. A drainage hole was located near here and the water emptied a few yards in a small copse.

Like many sites the well has a good legend, here a local tale tells that the house had a secret tunnel to Burton and indeed local people told the Newtons that there chamber could be the start of this tunnel. It seems very likely considering the height of the spring that it records some account of a conduit to the town.

The origin of the name would appear to be clearly secular, (cf Lord’s Well Southwell in Holy wells and Healing springs of Nottinghamshire), but record of the site being called St. Ann’s and God’s well is significant but I have been unable to trace the earliest use of these names.

Directions: The Lord’s Well lies in the private grounds of Sinai Park House. This is currently owned by Mr and Mrs Newton who open to the grounds on special days.

Different engraved stones said to jave been from the well.