← There’s a well in the bottom of the garden: St John’s Well of Wembdon
A Sutton Coldfield Field Trip → 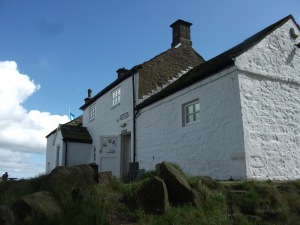 Today, 12th February is the birthday in 1809 of Charles Darwin, an unusual point to make reference to perhaps on a site noting mainly holy wells, but he does have a link to the topic. For in 1859 he visited the White Wells in Ilkley. Set high above the picturesque small town, the small white cafe and plunge bath was first built in 1690, but considering the proximity of ancient remains around may have an earlier origin. The spring, the main source of the Town Brook, was further enlarged and improved in 1780 by a William Middleton consisting a plunge bath now surrounded by railings with steps going down. The bath was a rather brave move for any pilgrim, the long and rough walk across moorland, I visited in the summer and it was freezing, the plunge within the ice cold waters. Some visitors would have drunk from a fountain to the rear or taken a shower or douche in another bath room, now converted to the cafe.
The water Darwin took had no mineral within it and it seems ironic perhaps that its curative properties were derived from either its immense cold or faith, something Darwin perhaps was beginning to lose for his traditional Christian upbringing.

Darwin visited the White Wells in the autumn of 1859, an important date for him for it was the year he published his most famous work, Origin of Species and indeed it is suggested that he travelled to this then rather remote town to escape the unwanted publicity which was published later that year in November. However, he is also said to have been very ill during all of 1859, whilst he was finishing up the final draft of ‘Origin of Species’ and had originally planned to visit in July but delays in finishing the book meant it was not until 2 October, once John Murray Publishers were sent that he went. First he stayed at Ilkley Wells House, a homeopathic establishment run by Dr. Edmund’s until the 17 October they took lodgings in North House, Wells Terrace House, indeed he was still staying here when the book was published. From here, he wrote to his friend William:

“On Monday they all come from Barlaston to the above address & I leave the Establishment. The House is at the foot of a rocky, turfy rather steep half-mountain. It would be nice with fine weather; but now looks dismal. There are nice excursions & fine walks for those that can walk. The Water Cure has done me much good; but I fell down on Sunday morning & sprained my ankle, and have not been able to walk since & this has greatly interfered with the treatment…”

Clearly little has changed today as the walk is equally a rocky one especially on the way down! The they he referred to were his family and at the time he was. The so-called ‘Water Cure’ was thought to draw blood away from the internal organs and provide relief but as well as his sprained ankle, he also got boils on his legs and found the experience rather depressing it appears. Interestingly, two days before the publication of that book Emma, his wife and children left and he himself moved back to Wells House leaving finally in the 7th December to Kent.

← There’s a well in the bottom of the garden: St John’s Well of Wembdon
A Sutton Coldfield Field Trip →