The Physic Well Barnet: a case for restoration

This mineral spring, called the Physic Well (TL 230 958) was of considerable fame in the county and beyond, and was the resort of many wealthy and famed Regency folk. Its discovery is noted in 1652, although 50 years earlier, Camden (1551-1623) in his Britannica wrote that:

“Upon the south border..was discovered a mineral spring..it is of great service to the Sex where there is general languor, difficult and rheumatic complaints the Barnet Whey is much recommended.”

This suggests it is possible that the well had been long known locally. Furthermore Fuller in his Worthies of England recalls that:

“already a catalogue of cure by this spring amounteth to a great number; insomuch that there is hope in the process the water rising here will repair bloodshed hard by and save as many lives as were lost in the fatal battle at Barnet.”

Chauncy (1700) describes its virtues suggests that its water would be good to:

“..dissolve acid tough Flegm in the stomach and guts, with sharp Choler, much better than other Purgers; and of great Efficacy in Cholicks, proceeding from both those Humours; in short, for most diseases that proceed from sharp and hot Humours (if they pass freely) they prove excellent safe Purgers.”

It was on the 11th July 1664 the famed diarist Samuel Pepys took its waters. He stated:

“half a mile off; and there I drunk three glasses and went and walked, and came back and drunk two more. The woman would have had me drunk three more; but I could not, my belly being full -but this wrought me very well; and so we rode home… and my waters working at least seven or eight times upon the road, which pleased me well“.

“arrived home was not very well, and so went to bed, and during the night got worse and worse so that melted almost to water.”

Yet, this did not deter him for on the 11th of August 1667 he returned, but this time he drank only three glasses. He put his earlier experience down to too much water!

Another famed visitor, Celia Fiennes (whose visits to spas are well known) also complained. This time it was about the conditions at the well. She described it then as an enclosed building of lattice work, in which visitors descended steps to take the waters (so deep that one could not see the bottom). She disliked the means at which the water was drawn, being dirty, full of leaves and having to wait for the water to settle.

In 1677, 20s was given; this was to be paid in perpetuity, by a Mr Owen, an Alderman of London, of the Fishmongers Company, for repairing of the well. By 1690s the dipper had gone and people were helping themselves, Daniel Defoe, in 1724 notes that it was ‘almost forgotten’.Indeed, the well was so popular that a clause had to be inserted in an Act of Parliament in George II‟s reign to secure access in perpetuity. The well was fashionable throughout the 18th Century and remained in good conditions until 1790.

Subscription in 1808 was raised for arching over the well, and erecting a pump to aid any invalid who wished to drink. This was finally demolished in 1840, and a farmhouse erected near the site. Even in 1867, however, funding came from a local boy’s school for its repairs. Finally, in 1907 the water was declared unfit for drinking and consequently the well fell into obscurity. 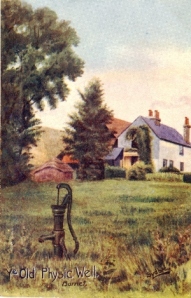 Indeed it was not until 1922, when during excavation for a housing site, that the well-chamber was found to be in perfect condition and described as typical example of 17th Century architecture. A report in 1922 reported :

“ This is a slightly ferruginous, highly saline and alum water, containing an excess of organic matter and a large number of ordinary bacteria. Doubtless this is due to the disturbance of local conditions when opening up the well, as the sample contained fragments of grass and straw, etc. There is no evidence of direct sewage contamination, Streptococci being absent and B. Coli Communis not being present in less than IOO cubic centimetres. It is, therefore, unsuitable for ordinary domestic use.”

Of the building by the Barnet U.D.C. that they should restore the Well to its former position as one of the attractions of Barnet, and the following year they opened the well and found:

“ an underground chamber and a flight of stone steps leading thereto. The Well Chamber is perfect and undisturbed, preserved by the earth that had covered it up. It has brick-built walls, floor and barrel-shaped roof alike. The bricks are small, red, hand-pounded and burnt. The room would hold about 20 persons. Two sumps, stone-lined, are sunk a foot or so in the floor for convenience in dipping out the water, and into them the spring is led by channels and pipes penetrating the surrounding ground.”

As the structure was in such a good condition, plans were made to preserve it, and a Neo-Tudor black and white well-house was built with a red-tiled pyramidal roof over it. This cost £500 and was completed by 1937. 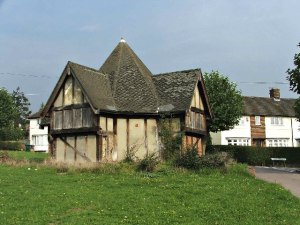 Unfortunately, by 1960 it was again in poor condition, and plans were made for its disposal. Fortunately, the hue and cry made by local conservationists saved it, and it was given a facelift. Today, it is surrounded by suburbia, being in the centre of a housing estate. Sadly, it is a little worse for vandalism, and one is unable to test the waters, as it is now padlocked. A peer through the door will show an octagonal well and its glimmering water source. The surrounding green is boggy underfoot, and one can only suggest that this is the spring arising around the area. This site is surely in need of greater protection and care and should be a candidate for Civic Trust openings. I don’t seeing it lasting long without some better protection.