In my volume of Essex holy and healing wells I referred to Sandon’s Lady well which is recorded on the first series of Ordnance Survey and that I recorded as being lost. My further research suggested that the site may exist. Closer inspection of a modern map combined with google map satellite images appeared to show a lane off the main road, called Ladywell lane and some springs near a tennis centre there.

I contacted the Tennis Club but they knew nothing of a spring so I assumed the spring I could see was not as I had assumed on their property. The best idea was to do some field work. At first I investigated the bushes near the Tennis Club, and after exploring where I thought the spring was, found nothing and appeared much to the surprise of a man walking his dog. Despite being interested and having lived in the area for many years, he had never questioned why it was called lady well.

Exploring further down the lane I rang the doorbell of a Ladywell House and a lady appeared. She did know the reason for the lane’s name and confirmed that it still existed! She pointed me to a small copse on the edge, but beyond, her garden where the spring lay. She did not know who owned the land but added that access would not be a problem. Taking the footpath, and there I did I find a gate into the woods, long since broken away which served access to the woody area. Going back on myself as instructed I found a steep channel carved through the mud and tracing back to the source, a spring arising from a clay pipe and forming a shallow but quickly moving stream. Perhaps not the most picturesque of wells but in Essex something unique, a surviving Lady well. Why this sort should be a lady well is unclear, the church dedication is St Andrew although Great Baddow’s church is dedicated to St Mary and interestingly the named Baddow is believed to mean bad water!

I was informed by the owner of Ladywell House, that it was believed locally that a local women drowned in the spring and this is why it is so called. I am always intrigued by such explanations and clearly this cannot be the reason and I postulate it is more likely to be due to some post-Reformation reassignment. Of course I say rediscovered peope knew it existed in the area but not many!! 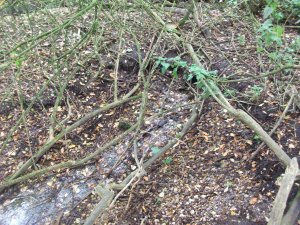 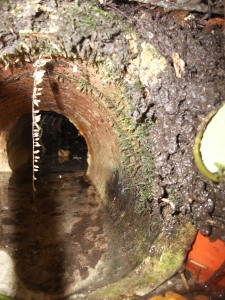