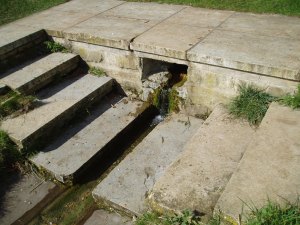 It is good to see the county town has still retained a site which Dr Daniel Layard (1759) described as spring to the north of Huntingdon as:

“The pure and limpid water called Horse-Common Water at Huntingdon, remarkable for its softness and little sediment.”

So it is still found, the Horse-Common water (TL 238 726) named after the area of land it is found in. Today this common is an odd relic surrounded on all sides by modern housing and a leisure centre. The spring produces a fine flow and is responsible for the marshy area here and its own survival; it would be an unsuitable area to build on. The spring arises from a substantial structure, with steps down to the water which flows out at some force and forms a channel through a paved area. An older structure can be observed within the more modern well house. There was a cast iron lion’s head where water flowed out of its mouth via a pipe and a chain with a cup beside it. All evidence of this has gone. 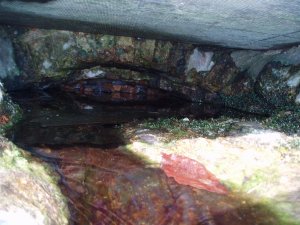 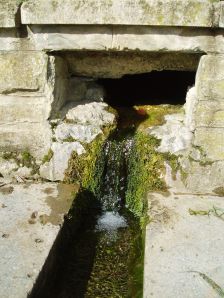 Local people state that they used it to wash their hair as it was better than tap water and picked water cress around the area. There appears to be no record of any medicinal use although it is clear that it was so regarded. Can we suggest considering its proximity to a Roman road, that it was known by Huntingdon’s Roman inhabitants? This site was also called Cowper’s Spring, associated with poet William Cowper who had a bath house built and presumably what remains are the relics of this.

Lying in the churchyard of the thatched chapel of St Michael, is a particularly fine example of a baptismal well, called Holy Well or St Michael’s Well (TL 403 658) However before the arrival of a Mr and Mrs Brown to the village the site was very neglected and little known.  The well settles under a large tree in the corner of the tree which may be significant and is enclosed in a yellow brick half barrel well house, at the back of this is a cross shaped window. This has been erroneously reported to project the image on the head of the baptised individual. However, I was informed by Mrs Brown that there was no evidence to support this although it is an interesting theory. The well arises in a shallow circular well with a gravel substrate (the source of the water is not clear), and is approached by a series of steps between two low walls and black metal railings which encircle this approach to the well with a small gate. A black metal guard has been placed in front of the well, and this can be raised to give access.

There would seem to be local disagreement over the use of the well and indeed whether it was dedicated at all! Its proximity to the church suggests its use in baptisms, although no clear records could be found. Notwithstanding, Mr Brown did speak to an elderly lady whose mother was baptised in it about 100 years ago. 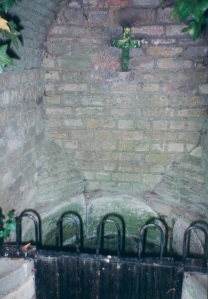 Well dressing was introduced in 1986 making two of Cambridgeshire’s Holy wells that have had this distinction. The dressing consists of a tryptic arrangement with a variety of images and motifs: The Golden Hind with bells and anchors; East Anglian Life: a windmill and church; The Harvest is ripe. A number of photographs of these ceremonies are displayed in the porch of the church. Sadly lack of interest within the village seems to have caused the abandonment of the ceremony, as it was only Mrs Brown and another elderly lady doing the rather time consuming work. Hopefully one day it will be restored.

Arising in a boggy hole is St Agnes’s Well or Nill Well (TL 268 625).The spring area is stained red indicating it schalybeate nature but it is difficult to discern exactly where the spring arises. It is found in a small copse just off a small road. Does the name Nill refers to fairies? Possibly not as there was a Gilbert de Knille recorded as a landowner in 1279, but did he get his name from the well? Which St Agnes is referred to is unclear especially as the much restored church is dedicated to St. John the Baptist and this likely that as Reaney (1943) notes that the village takes its name from Agnes de Papewurda. It is possible that this is the spring noted by Scherr (1986); recorded as Anneiswell, in the 13th century. Someone along the way has made the site related to a saint byb accident