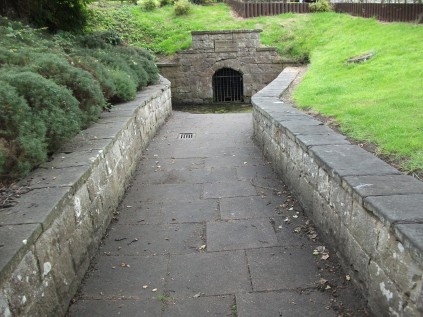 “Oswald’s Well. Legend states that King Oswald was killed in battle against King Penda at the Battle of Maserfield an Eagle later lifted, flew and then dropped his arm at this site from whence a spring of water has since bubbled.”

Such reads the plaque at this famous well. Told in the Life of St Oswald by Reginald of Durham, 1165 (tr. from text in Simeon of Durham 1882):

“the arm, with its consecrated right hand, fell on the bare hard rock. All at once, through God’s wonderful power, from the spot where the holy arm touched the ground in its fall, there gushed out a clear unfailing spring… It so happened that Oswin the king, prompted by a message from God, found his way to this spring… He took the arm and hand out of its waters, and as the vision had commanded, he bore away the most holy head with its arms and hands. On this spot, right up until today, miracles are worked through the power of God and the merits of St Oswald. Here sick people receive the gift of health; the mad who come here are freed of their demons; and through drinking the consecrated waters, many kinds of illness are redeemed.”

The legend of its creation possibly dates from Leland states:

“that in his day it was said that an eagle snatched away an arm of Oswald from the stake, but let it fall in that place where now the spring is.”

Another version states the arm was dropped when his dismembered body was being transported to the site and hung on a tree: Oswald’s Tree.

As Hope (1893) in his seminal work on Holy Wells of England notes that there the well is not mentioned in the authentic history of the saint and assigns a pagan origin, although this is difficult to justify and may be antiquarian fancy.

Its first mention appears to be a 13th century deed noting an exchange of land between Shrewsbury and Haughmond Abbeys:

“a furlong near the garden of the aforementioned Shrewsbury Abbey, which reaches as far as the furlong of the same at St Oswald’s well.” 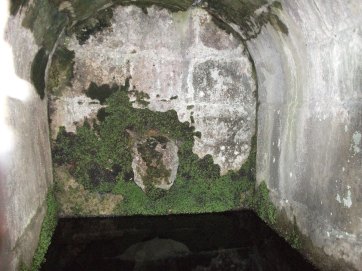 In the fifteenth century the chronicler Capgrave writes that in the plain called in English Maserfeld the church which is called the White Church is founded in honour of St. Oswald, and not far from it rises an unfailing spring, which is named by the inhabitants St. Oswald’s Well.

“the feeble and the infirm still believe and bathe in the well, and did more so until it was enclosed in the noisy playground. Bottles of its waters are carried to wash the eyes of those who are dim or short-sighted, or the tardy or erring legs of such as are of weak understandings.”

The establishment of the grammar school nearby undoubtedly caused the well to denigrate into a wishing-well. Hope (1893) notes that:

“One rite is, to go to the well at midnight, and take some of the water up in the hand, and drink part of it, at the same time forming the wish in the mind. The rest of the water must then be thrown upon a particular stone at the back of the well, where the schoolboys think that King Oswald’s head was buried, and where formerly a carved head wearing a crown projected from the wall….If the votary can succeed in throwing all the water left in his hand upon this stone, without touching any other spot, his wish will be fulfilled.”

This according to Hope or his correspondent was not the only form over ritual. He also states that:

“A young girl at Oswestry, about three years ago, obtained the wish which she had breathed into a small hole in the keystone of the arch over the well.”

Another approved plan is to bathe the face in the water, and wish while doing so; or, more elaborately, to throw a stone upon a certain green spot at the bottom of the well, which will cause a jet of water to spout up in the air. Under this, the votary must put his head and wish, and the wish will be fulfilled in the course of one or two days. Another plan savours of divination: it is to search among the beech trees near the well for an empty beechnut-husk, which can be imagined to bear some sort of likeness to a human face, and to throw this into the water with the face uppermost. If it swims while the diviner counts twenty, the wish will be fulfilled, but not otherwise. 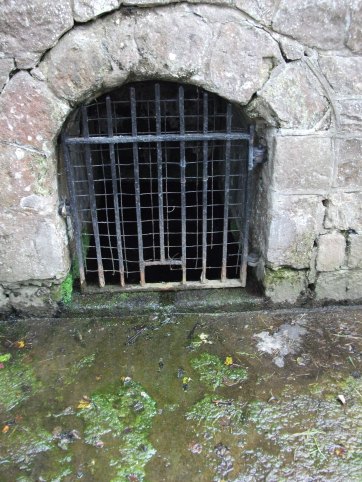 It is perhaps surprising that this well has survived. The first mention of the well is in the 14th century Life of St Oswald (Nova Legenda Anglie) stating:

“On that field is a church, called White Church, which was founded in honour of St Oswald. Not far off there rises an unfailing spring which the local people call St Oswald’s well’.

According to Leland there was also a chapel here of which the ruins survived into the late 1700s according to Pennant. The present walled fabric probably dates from around this time and is built into the bank. It consists of a rounded archway which is now unfortunately sealed by a metal grill. Despite some periods of neglect through the centuries, since restored hopefully it will survive for many years hence. Some feat for a well with a supposed Saxon heritage…if we believe the legends.