← A well for September…St Edith’s Well, Kemsing
The Holy Well of Tibberton →

Suffolk is only is perhaps well known for its Lady’s Well at Woolpit. And altough not particularly associated with holy wells but close reading of a number of texts and old maps reveals there are more sites than this. Last month I noted some Norfolk examples so here are some extracted from a forthcoming book on sites of county. 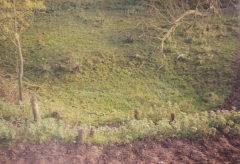 Situated in a remarkably remote location for this part of Suffolk, the Lady well (TM 061 552) is reached only by a dead end road that peters out into a dirt track at a farm courtyard. One then travels over a muddy field, to reach the site of the well. After such a journey the well it is a bit of a disappointment; the farmer directed me to a boggy circular hollow with no trace of masonry or even indication of any former importance. There is a large thorn tree over the hollow, but there is no sign of any use. Again apart from its description on the O/S maps as ‘Ladywell’ in Old English script, I have found no written account of the well. The farmer knew of the well, but not its history. Only its name remains to remember any past religious activity here, although there is some tradition that it was visited for medicinal purposes. The county record office has no details concerning the well.

A large structure called the Lady’s or Wishing Well or Lady’s Fountain (TM 450762), which is found down Spring Lane at the south end of Henham Park. The structure is made brick and stone arch and has two low seats inside. It was erected by the first Countess of Stradbrooke in the 19th century. It was thought to be a ‘traveller’s rest’ with brass cups attached to the structure for anyone wishing to drink there. It is recorded in 1833 the ‘Lady’s Fountain’ poem by Agnes Strickland An alternative name was Queen Anne’s Well.  This itself appears to be a confusion because according to some sources it relates to King Onna. The spring is said to be near the reputed to be the place of King Onna’s death (654 AD) and a structure was erected soon after to mark the spot where the spring arose where the king’s body fell.  The structure is now dry and overgrown but clearly has a confused history.

Within the grounds of St John’s well cottage is the said St John’s well (TL 889 669). It consists of a circular approximately two foot high well, with a fastened wooden lid. The brick work consists of a mixture of two red bricks layers sandwiching, a layer of round agate / pebbles, and then topped with a level of brick, and then a final layer of sandstone. Although the lid was locked, the water looked quite deep. A pleasant circular summer house has been constructed around the well. This has a concrete floor and a cone thatched roof supported by timber frames, set on short red bricked columns. A clematis has scrambled across the roof, and the indeed the edges of the summer house are quite obscured with vegetation. The well, to the left of the cottage gates, can also be seen from the road through the hedge, outside the private garden of the cottage. However apart from the marking of its location upon the appropriate O/S maps in Old English Script as ‘ Well ‘ The owners when I visited, a Mr and Mrs Williams knew little of the origin of the well, although the well’s water was still used according an elderly neighbour who had died recently that is back in the late 1990s. Its waters have never been known to dry even in drought conditions, despite being a shallow well of 7-8ft below the surface with 3-4ft of water. It is possible that the well received its dedication from Palgrave Chapel of St John, which was demolished in 1545. The only written report acquired is as follows :

‘Situated in the garden of a private house built c 1923 the well head and canopy probably date from the same time. According to the owner of the house the well is marked on maps as old as the 17th century but there is nothing of this age to be seen in the lining which seems to be modern brick. OD Card TL 86/NE7.’

I too have found no other exact details. It is possibly that the well is that referred to by Cruden in the following account:

‘There is also on Mr Milner Gribson Cullums property near Bury a spot named Holywell, but no traditions….survive.’

I have been unable to place the location of this site of which are a little vague. The county record office has no details concerning the well. Copyright Pixyledpublications

← A well for September…St Edith’s Well, Kemsing
The Holy Well of Tibberton →