← Is it Roman? Is it Egyptian? Is it Greek? The confused Hart’s Well
Friar Tuck’s Well…new…well actually old photos →

The veneration of water in 12 objects…number three the Mikveh 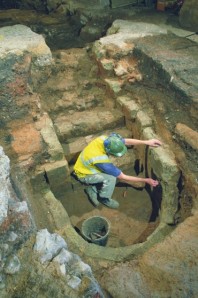 One of the fundamental important aspects of humanity is the understanding of both the importance of water and its purity. In the Hebrew faith, the significance of water in having a ritual cleansing function has been distilled into the mikveh, Mikvah, Mikve or Mikva which literally translated means ‘collection of water’.  Unlike many of the sites recorded on this blog, mikveh still have a central and pivotal role in all forms of the faith.

The Mikveh thus has a wide range of purifying functions. Firstly, to enter the Temple, the person needed to be purified, but the convert would also need such purification. Secondly, the body of a woman would become ‘purified’ by immersion after child birth and menstruation, Niddah, so that marital relations could be resumed. However, deeper research of the Torah suggest an even greater amount of uses:

•        after Keri — normal emissions of semen, whether from sexual activity, or from nocturnal emission;

•        by anyone who came into contact with someone suffering from Zav/Zavah,

•        by Jewish priests when they are being consecrated

•        by the Jewish high priest on Yom Kippur, after sending away the goat to Azazel, and by the man who leads away the goat

•        by the Jewish priest who performed the Red Heifer ritual

•        after contact with a corpse or grave, in addition to having the ashes of the Red Heifer ritual sprinkled upon them

•        after eating meat not dispatched kosher

Consequently, with such a wide range of demands, Mikveh would be placed in domestic and public locations. Importantly, the water used for a Mikveh, natural spring water was preferred if clean and not affected by mineralisation, like chalybeate springs. Alternatively, water derived from rain, snow or ice is considered pure enough.

However, I am focusing on the discovery of one particular Mikveh which dates from the mid-13th century. A medieval Jewish community existed in England from 1066, when William the Conqueror invited the community to establish themselves in a ghetto until its expulsion in 1290 by Edward I. A report in the Guardian from October 25th 2001 reported that what is thought to be the oldest physical evidence of Jews in Europe and the only found in London was discovered. This was during a routine excavation of the gold bullion vault of the State Bank of India in development of office works. It was in the area called the Old Jewry in London, on the corner of Gresham Street and Milk Street. So far no concrete evidence of Jewish life had ever been found in the area, supposedly because no difference could be seen in domestic buildings between Jews and gentiles. Howver, Dayan Ehrentreu, head of the Court of the Chief Rabbi, indentified it as a genuine mikveh.

It has been elucidated was that it was built for a local Medieval Jewish family called the Crespin family, however where it was a private site or part of a synagogue is not clear. The site made of well cut greensand stones consists of a semi circular basin around four feet across and four feet deep with a flight of stone steps leading down into it. The next oldest Mikveh site was found in the 1950s in Cologne, Germany and dates from 1170.  Of course there may be many more Mikveh waiting to be discovered, another Mikveh may have been unearthed in the 1980s. It was described as “‘A rather strange tank-like structure was found about 100 yards from where this mikvah was found. It was identified at the time as possibly a strongroom, photographed, and cleared away,” It is said that years later, an archaeologist working in Israel looked at the photographs identified it as a Mikveh

The survival of this mikveh illustrates that water is important to all communities of the country and that water is important in ritual to all faiths.   The Bevis Marks Synagogue paid to have the site removed and were to rebuild it in their grounds, but in the end it was set up in London’s prestigious Jewish Museum where it can be examined….a rare medieval relic.

← Is it Roman? Is it Egyptian? Is it Greek? The confused Hart’s Well
Friar Tuck’s Well…new…well actually old photos →