Well it’s been a great few years and pleasing to note that I’ve had views from nearly two thirds of the globe..so thanks reader especially the followers. You’ll see some other changes new pages etc, so hopefully it’s all new and improved, on the 19th, but as the first post was on the 8th I’ve posted earlier than usual.

There is no contest what healing spring must be discussed for the 100th post…no well has such a long recorded history of cures, no well has an unbroken tradition of pilgrimage, no well has such a complete infrastructure, unique in its Perpendicular splendor…only St. Winifred’s Well at Clywd, so famed it gives its name to the town and so famed it is now called the Lourdes of Wales, although it is much older and more significant than that. However, it is a daunting task to discuss such an important site, but here I go

The origin of the well

The story dates back to the seventh century. It involves St. Winifred, real name Gwenfrewi, was originally the daughter of a local lord, Tyfid ap Eiludd and his wife Wenlo, and after being taught by a monk called Beuno, her uncle, became a nun. However, Prince Caradog took a fancy to her and kidnapped her. However, she escaped and trying to reach Beuno was caught and beheaded by Caradog. Beuno cursed Caradog, who then disappeared.  Where Winifred was beheaded the spring arose, however Beuno prayed over her body and she came back to life and ended her days as the Abbess of Gwytherin.  There her grave was a pilgrimage site until her relics were removed to Shrewsbury in 1138.

A potted history of the well

The first mention of the well is in 1093, when Haliwel was granted to Chester’s St Werburgh’s Abbey. By 1240, to Basingwerk Abbey had been granted it by the Welsh prince Dafydd ap Llewelyn. This established the link between the two sites and it was administered by the Cistercian monks until the Reformation. The fame of the saint and her well attracted many pilgrims, Royalty amongst them: Henry V, Richard III and Henry VII. It was the latter’s mother, Margaret Beaufort, who built the current prestigious well house and chapel and by doing so probably ensured it escaped destruction under her grandson Henry VIII.  Evidence suggests that Catherine of Aragon was also a patron. Unsurprisingly, it became a location for Catholic resistance, the Jesuits, and even in 1686 James II and his queen visited to pray for an heir, before later exile.

Its construction begun in around 1500 and took probably 15 years to finish. The structure consists of a star-shaped basin into which the water arises and flows into an oblong bath with steps either side. Originally reached from the chapel above, although this access is blocked, the structure is set into the hill side. It has a vaulted ceiling supported by columns with its Gothic tracery. The chamber is reached by a triple arcade entered from the north. The centre of the ceiling is a worn pendant showing the story of St. Winifred looks over the spring head. A niche to the side a statue of St Winifred, which replaced one destroyed in the 17th century in the 1886. Above the well chamber is a chapel full of carved figures. This has seen many uses over the years, such as a school or courthouse, is a simple single nave and side isle with an altar in the apse. 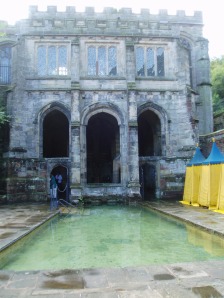 “But the ground stained with her blood cracked, and a rapid spring gushed out in that place full of water, the stones of which to this day are seen bloody as on the first day. The moss also smells as incense, and cures divers diseases.”

An interesting feature sadly now gone was a red staining moss, called Jungermannia asplenioides which was said to be indelible stains of St Winifred’s blood. Another moss, Byssus jolithus was ‘St Winifred’s Hair’. This moss was dried, made into wreaths and sold in the 17th century for its healing qualities.

The ritual undertaken at the well is to pass three times through the small inner bath, saying the Rosary; the pilgrim enters the outer pool and prays on St Beuno’s Stone or Maen Beuno. The stone as the name suggests is intrinsically linked with the legend of the well. It is on this stone that the Beuno was told that anyone who asked Winifred for help would receive their request by the third time. The stone is certainly very ancient and perhaps prehistoric in origin. 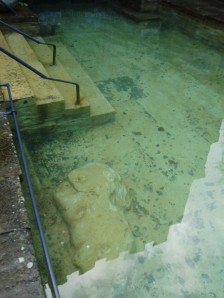 A catalogue of cures

“Moreover one born blind, service being duly performed in the tabernacle of the virgin, went of to the well, and washed, and saw, and gave thanks…And many times this most benign virgin relieves dropsical persons, restores the paralytic, heals the gouty, cures the melancholy. No less does she remove sciatica, eradicate cancer, cure shortness of breath, extirpate piles…Why by enumerating a few things do I try to mention all? So many and so great are the gifts of the virgin, that their infinity defies enumeration.”

What is also remarkable about the site is the catalogue of cures, graffiti around the well accords. Perhaps the most noted was that which occurred after a sick monk at Shrewsbury Abbey was told by a vision of the saint to say mass at the well. After this had been done, the monk began to recover, and went to Holywell himself, where his cure was completed. It was this Holywell cure which determined the Shrewsbury monks to adopt Winifred as their patroness, seeking out her grave, and removing her bones to their church in 1138.

No complete record apparently has ever been produced. The main source for the early accounts in the saint’s Vita or Life. The first version, Vita Prima of which was written in 1130, and the second life. Vita Secunda, written some ten or so years later at the occasion of the relic’s translation by Robert of Shrewsbury.  This was translated in 1635 and then rewritten by Jesuit Fr Metcalf.  Through the protestant period, miracles continued and from this period one describes:

“About the yeare 1590 Fr Edward Oldcorne of the Society of Jesus with another English priest…travelling in the kingdome of Naples…had poyson given them…there still remained in them an extraordinaire inward heate of the liver with other diseases, and especially Father Oldcorne, whose tongue and mouth contracted a hard sore many yeares after his coming into England…And as all cure and human remedied failed and being very sensible of losing his speech, he was bent…to undertake a pilgrimage to Holy Well…But whether the occasions permitted not…some yeares after being at a gentlemans house in Worcester, he chanced to see a little blood stone…of S. Wenefrides Holy Well, he presently honoured it with great veneration, prostrating himself on his knees before the altar, he putt it in his mouth, and turning it therein to and fro with his soare tongue…he sayd 5 Paters et Aves with Creed. And immediately he found himself much better, his tongue cooled, and his stomack in farr better temper then before; then…he went to Holy-well: where drinking of the water of the sacred fountain with other devotions performed, etc., he was perfectly cured, and never after troubled with the sayd disease.”

Miracles are recorded throughout the next two centuries such that the 1817 The Life and Miracles of Saint Wenefride, states in discussion of a cure that the witnesses:

“numerous and consist of persons of different stations, religions, countries, and places of residence, with Protestants, Catholics, English, Welsh, residents in Wolverhampton, Liverpool, and Holywell, who could not possibly be combined for the purpose of attesting a series of falsehoods.”

Until the 1960s the crypt was filled with crutches, these can now be found in the small museum. And so the cures continue.