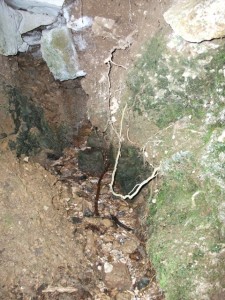 One of the best signposted Holy wells, being signed from the town of Market Weighton! St Helen’s well is an evocative site. It is found to the south of the village lying in a wooded valley. The spring arises from a small cave and fills a triangular stone lined chamber. This structure has been linked to bathing but there is no evidence of such an activity and it may be more due to the water being used to fill the steam engines which used to pass by many years ago. Nevertheless this is a calm and charming site which has been considerably improved with a stone built well house enclosing and protecting the natural cave without detracting from the site’s ancient nature. Also below since I visited a local tree has become a considerable rag tree.

“It is circular, built up with stone below and brick above, and roofed with corrugated iron, the approach being by four steps…the well like most old springs, has excellent water, bright and clear, and gives a never failing supply, the overflow finding its way to the Beck.

Also called the Quaker Well due the presence of a Quaker meeting house at the front of the house, it now apart from the roof much as Smith notes and is a charming and quiet shrine in a well manicured garden.

The site enclosed in North Cave Castle grounds, of which Smith (1923) notes:

“is situated not far from the church, and a short distance within the Park Gates of the Castle and quite near to the north side of the fishpond. Some years since it lay by the north of a road running from the Market-Place to the West End, but when the fishpond was made, the road was diverted, being brought more to the south and so away from the well.”

“The well is a clear and copious spring, and from time out of memory it is said to have given the whole place its water, and at a fire in 1875 at the Castle I am told, it supplied the water to the engine.”

“Now save the laming of cattle it is covered with a slab of stone.”

This has now been removed although a mess covers the spring head to prevent leaves entering. The area around the well has been gravelled and the well itself surrounded by stonework. 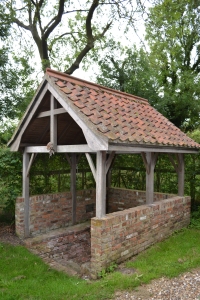 “At Great Hatfield, some half-mile from its beautiful cross, near the churchyard, and so originally not far from the south side of its former church lies the Well of St. Helen…the well flows from a bank and is covered with a roof of grass sods supported by walls. It is approached by four steps and a landing of stone facing east, its opening being at one protected by a door of which the frame only now remains.”

In 2014, on the 21st May a short service was held to re-dedicate this. In the mid 1990’s a committee was formed and the Well was reroofed. The work was completed in August 1995, the Well was dressed and a short service took place. This has happened nearly every year since.

“People would come to the Well and ask St. Helen for healing or to help with problems. The person would face East and put lace or a rag on the nearby hawthorn. This had to be done in secrecy at dawn. St. Helen’s is a rag well, (only a few remain throughout the country).” 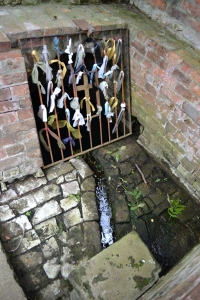