← The lost splendour of Reffley Spring
Veneration of water in 12 objects…..number 11 the Bullaun →

Where a few surviving hedges, Keep our lost Elysium – The Waxwell of Pinner

Pinner is classic suburbs. Lovely well kept houses, neat lawns, tidy hedges but as John Betjemen’s quote suggests some relics of past times remains……in this case on the junction of Waxwell Road and Uxbridge Road. The Waxwell (TQ 118 905) is such a surprising substantial well site that it is surprising it is so little known. Researching our holy and healing well heritage in London and Middlesex is generally a disheartening experience. Many wells have been lost forever, even their locations cannot be effectively traced or else enclosed away. The Wax well is an exception, although it has not completely escaped the perils of urbanisation, it remains remarkably unchanged from the last century as comparison with today and the postcard testifies.

The name is interesting, it is the only one I am aware of. A plaque by the Harrow Heritage Trust reads:

“Wax Well Name was first recorded in 1274 as ‘Wakeswell’ Thought to mean ‘Waecc’s’ Spring. Until mid-19th century the well was the most important source of water in Pinner village and reputed to have healing properties.”

The name is either from a personal name or Anglo-Saxon Woecce whichmeans ‘to guard’ perhaps suggesting that the water was important or associated with a ritual. However, the site is close to Grime’s Dyke which was the boundary of Mercia so the guard may relate to use by people associated with that site.

A tradition that anyone who drunk of the well would stay in Pinner forever, this being a tradition often associated from Anglo-Saxon sites, such as Keldwell in Lincolnshire and Bywell in Northumberland, both Saxon sounding wells so there appears to be a significant relationship. Pinner residents clearly protective of who lives in the area, they have perhaps prevented people from testing this out for no water can be found there!

Yet it was a very reliable water source especially in dry periods when people would travel from miles around to collect it.  The healing properties of the water ranged from the being good for eyes to unusually reviving people at the point of death! Sadly, since 1870, the site has been sealed up and the site is now dry and deep in leaves. The well consists of a large red brick domed structure set into the bank and earth covered.  The water arose under an arch in a semi circular basin set into base of the chamber with three steps reaching the water. 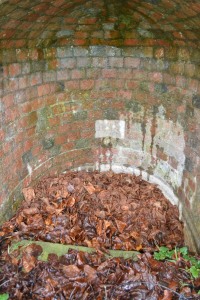 ← The lost splendour of Reffley Spring
Veneration of water in 12 objects…..number 11 the Bullaun →