I did become a bit pixy led looking for this one…it was the hottest day of the year so far, fortunately the walk to the well, or rather what I could assign to it poorly marked on the OS, was down hill! Good job as it was very hot. A long way from the weather today…

The Nun’s Well is a fascinating site. I have yet to find any concrete facts about its history, yet its local legend of a ghost which is most appealing. Legend tells that a local nun was pushed down the well and it was covered over, only to be discovered by farm labourers, some years later. As a result she has said to have haunted the area. I have been unable to neither substantiate the origins of this story or the nun in question, neither F. W. Hackwood’s 1924 work nor Jon Raven’s 1974 work, both on the folklore of the county, record a ghost or the well, despite the latter’s detailed notes on wells in the county. Only Duignan (1884) suggests a grant of Henry II to a priory of Farewell and the spring may have gained its name from then, suggesting the origin of the story. Nuns immured in wells are not unique in well folklore and it is possible that they mask a more ancient tradition. 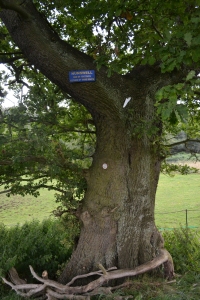 This is perhaps the most hidden of all the springs and wells I have investigated.  Accounts are misleading, some accounts on the web suggest it has been destroyed, but that is far from true. It is however, difficult to come across for the well arises beside, not under as some accounts state, an oak tree. Despite having a photos of the said tree I walked past it and went into the wood beyond which led to the Nun’s well car park..which was locked! I followed my instincts and took a path which looked well trod, but led to the edge of the wood but to a man mowing a lawn. After disturbing him, in more ways than one, he said he did not know where exactly it was but it was not here! Tracking my route back I noticed the tree I passed had a blue sign upon it:

I had found my tree and the well. This tree was surrounded by a small white fence which I at first feared may have been electrified. It wasn’t fortunately. However the area was surrounded by tall nettles. I gently lay them down so that I could have a look for the well. 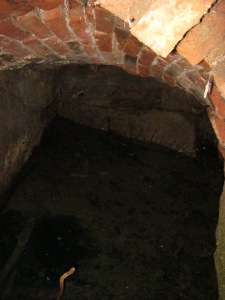 I found the narrow hole described by Tim Prevett on Megalithic Portal, with one or two bricks around it and thinking this was the only hole used by 33mm camera to get some shots. This is a bit disappointing if it’s the only viewing point. However, it was only when I took some shots upwards to capture I thought the chamber’s roof that I noticed I had taken a shot of sky. There was another viewing area! Sure enough the other side of the tree was a much larger opening about two feet square which was covered with boughs for safety. Removing one or two of these boughs (replacing them back afterwards) I could see a better view of the well. The first aspect I observed was the remains of a brick arch and it was clear that well was still partly covered by a barrel roof made of bricks which was in quite good condition. Using my SLR camera I took some shots. From these it is clear that the chamber is quite a large one, partly cut from the sandstone rock from which the spring arises, although some of this wall appears to be made of dressed stand stone blocks, particularly at the back I thought. Towards the front a piece of corrugated iron and some barbed wire has been placed there, when it is difficult to gage but it must have done by someone in the well chamber and presumably to prevent the earth back filling. The brick work is said to be 16th century and came from a local iron works. The tree’s roots have clearly grown partly over the roof at some time and causing it to collapse resulting in the rubble of stones around and the large hole to the north of the tree.  One could climb down into the well but I thought twice, one could I climb out? Probably. Secondly, peering down the well I felt a little disquiet. Had I disturbed the nun?

An interesting site pity despite the park being named after it no one thought of putting an information sign up!

Taken and amended from Holy Wells and Healing Springs of Staffordshire – forthcoming 2015.