← The most ancient holy well in England? Southam’s Holy Well, Warwickshire
Once a place of pilgrimage….St. Anne’s Well, Caversham → 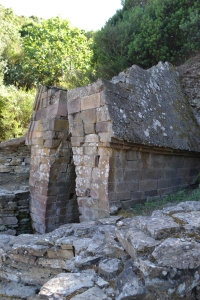 Imagine you are digging your allotment and soon something is revealed – one, two….more and more worked basalt blocks…soon one of the most remarkable pozzo sacros to be discovered in Sardinia was discovered. The only one which gives archaeologists an idea of what originally covered the other sacred wells of the Island.  Orune’s Pozzo Sacro Su Tempiesu is not remarkable not only for its good preservation but also for its exceedingly remote location.

In the summer of 1953, a member of the Sanna family was said to be either planning a vegetable patch or digging for coal, found some worked blocks. What soon revealed itself was something quite unique an intact, bar the very top of the arch, sacred well. The site was excavated in 1958 and then in 1981-86 resulting in consolidation to the appearance it is now. 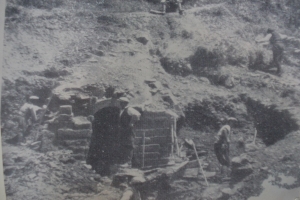 Photos from the discovery.

Photos from the discovery.

The temple consists of the usual arrangement – vestibule, staircase and well chamber. The well chamber appears to have been set up between rock shale walls to cleverly channel a spring which erupts at the junction of a vein of rock.

The vestibule, quadrangular in plan, with a depth of 1.60, 1.85 width, and height of 4.50 m. The floor has a slight slope with projecting walls constructed of large perfectly jointed slabs, with perfect joints. There are decorative arches set into the upper wall. The cover of the well has a dual-pitched roof with double eaves, with an acute triangle gable roof with a truncated pyramid ashlar, which had twenty votive bronze swords inserted into it.  Two seat benches and two small rectangular cabinets are set into the side walls of the hall. A staircase reaches to a small room ‘tholos’ which covered the spring which has a flagstone floor with a central dimple.

The engineering involved to ensure that the spring is clear and lacking in impurities is one of the most impressive features of the well.  The water enters its tholos chamber, as like Santa Christina. This one is smaller having a base of just below a metre and 11 rows of perfect layers which form the nearly 2m done. The cavity’s base in basalt paved and slopes towards its entrance which has a number of steps leading to a threshold step. The well has a porch or vestibule which is paved by slabs of gently sloping trachytes. This is bounded by a wall and these become a very narrow pointed arch.  However this arch was destroyed by landslip. 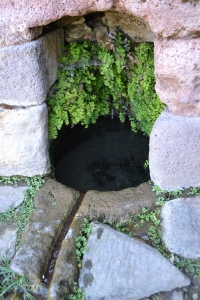 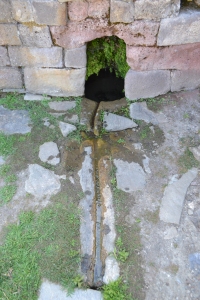 However the base which holds the water is circular in shape and has a dimple which allows decantation and collects impurities.  Furthermore, the water then flows through a moulded groove, running obliquely left to right into a smaller basin. The purpose of the smaller basin is unclear if it were built for domestic uses one would expect livestock use but as the site is ritual unlikely. Did it provide a location for ritual washing of objects to be placed in the niches and shale shelves which remain within the structure? Indeed, this site did yield a number of very interesting votive figures.

This well chamber’s arrangement in itself is of course impressive but the structure above the well is awe inspiring considering its neatness and that date between the 10th and 12th Centuries BC. The structure is made of trachytes igneous rock, very hard and very difficult to fashion – yet it is squared and cut perfectly without any crooked sections. There is no mortar but lead cramps and everything is iodomic – of equal size. What is equally remarkable is that as the natural rock here is shale it must have been moved probably from the district of Dorgali – this suggests perhaps that the culture recognised the importance of this rock either because of its durability and its ability to hold water.

To reach the well today consists of a long and undulating car journey from the town and an equally long pleasant downward walk (but a very tiring one going up!)…a location so remote one wonders why it was here. However, evidence does show that a short distance away was a nuraghic settlement of S. Lulla which may have used the site. 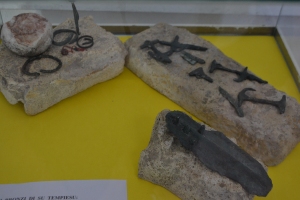 Inside the structure were a range of votive offerings. These consisted of bracelets, pins although these were weapon based, rings, swords and buttons which suggest a long period of devotion, from Bronze to Iron Age, although what is not clear is what each offering bestowed and meant. The most noted were three figured bronzes or bronzetti figures one showing a beared male figure, another holding bread and a pair of figures together said to be bidder.  The flat top of the well, had 20 swords stuck in the top…the reason unclear.

The Su Tempiesu is an amazing discovery which was fantastically restored and gives a vital view into the Bronze age water worship of the island….the other posts this month are all about restoring sites..

← The most ancient holy well in England? Southam’s Holy Well, Warwickshire
Once a place of pilgrimage….St. Anne’s Well, Caversham →