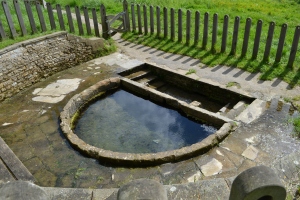 Perhaps the most ancient holy well in the country is also one of the most delightful with presently presumed 18th century and medieval features it is certainly a remarkable survival – even more remarkable since its’ splendid restoration.

The first mention of the well is apparently 998, when it is mentioned in a charter to Leofwine by King Ethelred the Unready as a consequence as the term holy well per se derives from Old English halig this is probably the oldest recorded. However, it does not appear to be specifically mentioned as such.  However in a Feet of Fines there is a notice in 1206 of a:

“half acre land at Hallewellcul to the north”

Over the next 800 years there then appear to be regular references to the well. By the 18th century there is reference to some sort of protective structure, although the date of the current structure cannot perhaps be gauged from these references. By 1701 a record notes that the Rector was exempted from keeping the well and fencing in repair:

“one footway of the breadth of three feet leading from a certain stile at the bottom of an ancient enclosed ground called Bury  Orchard towards Ufton by the Brook to the said well called Holy Well.”

By 1760, a public footpath to the well was made permanent in an Act of Parliament  and the enclosures act noting:

“it is hereby further enacted and declared, That the said Well, called Holy Well, in the said Open Fields of Southam aforesaid, shall not be allotted to any of the said Proprietors, but shall be  inclosed round with Posts and Rails, Three Yards at  least distant from the Stone-work of the said Well, by, and at, the Expence of all the said Proprietors, and shall be kept for the Benefit of all the Inhabitants of the Parish of Southam  aforesaid; and which said Posts and Rails shall, forever thereafter, be repaired and kept in Repair by, and at, the Expence of the Inhabitants of Southam aforesaid; and that the said Commissioners, or their Successors, or any three or more of them, shall assign, or lay out, a Footway from the Town of Southam  aforesaid, to the said Well..”

The main two properties, other than a possibly being better than beer, is that it was very cold but never froze and that it was good for eyes.  Indeed, its powers in restoring eyes lead to a Henry Lilley-Smith establishing in 1818 an eye and ear hospital not far. Local remedies also recall how to make a tincture with the well water for eyes.

The well of St Fremund?

One of the possible reasons for the site being a holy well is that it was associated with the Mercian saint Fremund. The Life and Death of the Most Holy Fremund, King and Martyr by Burghard, 12th century (tr. from text in Nova Legenda Anglie ) tells how St Fremund, having been beheaded:

“stood up as if nothing had happened, picked his head up off the ground, and set out with the head in his hands. The crowd were amazed at this miracle and followed in his tracks, praising God. He made his way to a spot between Itchington and Harbury, and when he got there he took a stand and thrust the point of his sword in the ground. He prayed to God for a little water to wash his head and body, and what he sought, he gained. For a spring welled up at this very spot, flowing in an unfailing stream and proving the merits of this famous martyr before all the world. He drank of its waters, he washed his wounds, he gave honour to that God in whom all live and have their being. Then turning his head to the east, he sank dead to the ground”.

The Metrical Life of St Fremund by William of Ramsay, 1194×1220 (tr. from text in Pinchbeck Register 1925) repeats the story from Burghard, detailing how ‘No sooner had he wished for water than a spring appeared/ Purer than dew, clearer than crystal, finer/ Than gold, and scattering silver sands’. Later, the Life of Sts. Edmund and Fremund by John Lydgate, 1434 tells how

“there sprong up a welle/ With crystal watrys the stremys gan up welle;/ And wessh away the blood that was so red,/ Which doun disttillyd from his hooly hed”.

egend has it that Fremund was a son of Kind Offa of Mercia. After his death, a great battle ensued at Radford Semele against the invading Vikings  in which Fremund was completely victorious. However as Fremund knelt in prayer of thanksgiving one of his own men envious of his success struck off his head. However the legend suggests that the well was not at Southam. For when his corpse stood up, picking up his head and walking away; he stopped somewhere between Harbury and Whitton, possibly Whitnash and there a miraculous well sprung up at his feet, in the water of which he washed his head then lay down and died.  This would go against the view that the Southam well is the same.

The first description of the site is Carlisle (1812)  ‘Observations on the positions of the alien cell of Begare, and of Halywell upon Watling Street’ who describes:

“a well of very fine clear water, called Holywell, or Halywell, which has always been reputed salubrious. It is… perpetually overflowing, without much variation from the seasons. It is a basin on the declivity of a rising ground. Its form is the larger section of a circle; the bottom is paved with smooth stones; and the sides are walled with the same, a little higher than the water stands, which is about two feet deep. It was formerly nearly encompassed with another wall, and upon a stone, at the mouth of the well, the words Utere, sed non abutere were inscribed.”

However it was apparently in decline by the 1850s as an article written on the 6th October 1855 in the Warwickshire Advertiser describes:

“on the foot road from Southam to Stoney-Thorpe, the residence of  H T Chamberlain Esq., is an Ancient Well called ‘Holy Well’ now in a dilapidated condition; but even in its present state, the massive stone work, with curious and not very elegant carved head shews it to have been at one time an object of interest. Its earlier history is not clear, some asserting  that it was the source from which Stoney Thorpe was supplied with water when used as a Priory ……it is a large semi-circular well about five feet deep embanked with massive stone masonry, and is supplied by a powerful spring of the Purest Water. It lies at a lower level than the Town, otherwise it might without much expense, be made most valuable for domestic and sanitary purposes. Tradition says it formally had a stone seat placed round it; was furnished with drinking vessels, and covered by an Arched Stone Roof; thus affording refreshment to the Traveller, and a pleasant resort to the health seeker. It is now proposed to restore by a public subscription, this beautiful relic of antiquity, and a considerable sum has already been promised.”

This restoration is described by Freton (1890) in his The Warwickshire Feldon: a sketch of its hills and valleys, waters, famous trees, and other physical features in the Proceedings of Warwickshire Naturalists’ & Archaeologists’ Field Club, states that around 40 years ago:

“I and a few enthusiastic friends undertook to clear out this old well, in the hopes that it might lead to its ultimate restoration. Our efforts as amateur navvies excited little sympathy among the rough labouring lads of the neighbourhood, who seemed to look upon us as having a slate off, and we invariably found our labour of one evening fruitless the next, so after a week’s hard work we  gave it in.”

Certainly when Richardson (1928) found it as:

“a semicircular recess in the bank. A low retaining wall – recently renovated – prevents the bank from slipping down into it. At its foot is a flagged path along the curved margin of the semicircular well. Impounding the water in the well… is low two buttressed stonework. The stonework is much mutilated, the water flowing over the two broken and worn ends; but the central portion is higher and has three faces sculptured on it from orifices below which the water spouts out. Two flights of steps– that on the left with three steps, that on the right with four – lead down to a “trough” below the stonework”.

The most curious facet of the well are the well worn, and hence presumably ancient carved heads. What is their origin? Thoughts have ranged from effigies of sun gods to the recycled remains from a priory or church. I certainly favour the later and they were probably gargoyles and incorporated in the fabric in the 18th century. This may explain why they look more worn than would be expected if was last constructed in that century. However, it seems odd to have incorporated them and it may have been an attempt to produce a folly for a local lord.

However, despite Richardson’s favourable visit, not everything was positive. In 1925 the water was diverted into a reservoir and the provision of mains water artesian wells in the 1930s took their toll on the flow, an article in a local newspaper noting that:

“the Holy Well itself a few yards away has been partly emptied, and no water now flows into its basin in dry weather.”

By 1981, Brian Townsend noted in Southam Through the Centuries III notes it was little more than a trickle but a year after clearing out and restoration by the Community Enterprise Programme restored the flow through the heads. Yet by 1991 it was dry again, possibly as the result of quarrying and work on a by-pass. This is what it was like when I first visited…filled with rain water and polluted by crab apples. Through the 1990s restoration was planned but due to various reasons it was never attempted until the early 2000s. By 2005 the water supply was relocated and it could be restored, a Holy Well community was established an Heritage Lottery Fund money of  £102,500 was successfully obtained. By 2005-7 the site was splendidly restored with seats and a palisade fence with delightful well related carvings on the posts…a fantastic return to the glory..the crowning of that glory the fact the water flows as profusely as ever. A delightful site and a holy well must.