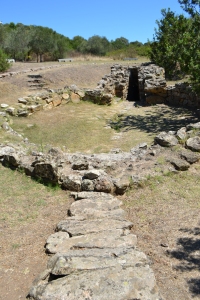 Many of Sardinia’s great sacred wells are found in romantic lost landscapes, dry arid fields or high in mountainous regions. However, one of the island’s most significant and evocative is found a few feet away from a busy main road, tucked behind an industrial estate and often overshadowed by the multiply planes which fly in and out of Olbia airport from across Europe. This well enclosed in a quiet oasis is that of Sa Testa, well sign posted from Olbia.

The site’s discovery was in the 1930s by shepherds seeking out water supplies. It was subsequently excavated by Franceso Soldati in 1938 and subsequently restored in 1969 by Ercole Contu. The work revealed bronze objects, such as dagger hilt, bracelet, ring as well as fragments of cup. These pieces placed the date of the site in line with the other sacred springs of the island, around Bronze Age end, 1200-900 BC.

However what is perhaps more amazing is that this was a site of continued ritual use. A fashioned juniper wood figurine was the most interesting. This was believed to present the archaic Greek God of Xoanon, a sort of phallic like large headed and little or in this case no armed deity, which dates from the 7th to the 6th centuries BC. Also found were thymiateria, Greek incense burners. Both finds clearly indicate that the site was of ritual use by a group unconnected ethnologically to the Nuragic people who built it. These was probably deposited by Phoenicians whose black painted bowls and pitchers were also found. However, the finding of jar and cup fragments from the Tuscan pottery production of Arezzo, emphasizing the influence of the Romans and their continued use if not for cult reasons than for domestic use. 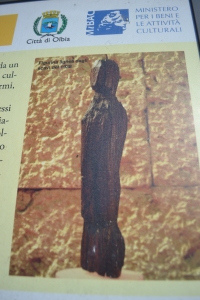 The ritual use by the constructors is suggested by the curious circular courtyard arrangement, 8 by 7 metres approximately around the well. This appears have been constructed so that some ceremonial activity could be undertaken with the circle with the ‘priests’ or secular members watching from around the edge from a bench. One view is that this site like that of Santa Christina was aligned astronomically with the moon’s minimum and maximum declination during its 18.6 year cycle.

Although not the largest of the wells, it is nevertheless substantially made. Built with cut granite and shale blocks it covers a length of around 18 metres and consists of a circular courtyard,, trapezoidal entrance, staircase and a tholos roof to the spring head. A second tholos has been lost but steps still ascend to it. 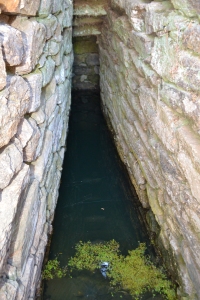 Seventeen steps make their way to the clear deep water and to descend into them divorces you immediately from the hot air outside. The channel down through which these steps descend is made of shale and is narrow. What is also interesting in a paved over channel which goes from above the source and round into the source. Such an arrangement is usually stated to be collect run off but with a strong source even today in August why collect rain or condensation water? Was there another source above or was something else poured into the channel to collect in the well? Perhaps we shall never know what happened in this enclosure but despite the industrial and urbanisation around one can just feel the separation from modern times in the cool confines of its chamber.