The Roman occupation of the island has left a few remains although not as many as the mainland Italy. The most remarkable of these is the spa of Caddas, called Aquae Ypsitanae, a name coined by Roman writer Tolomeo. It is an incredible survival nestling on the banks of the river Tirso. Established in the reign of Trajan the site consists of a forum, an amphitheatre (a few metres off site) and the spa. Being located at the most significant thermal region on the island, and even on a hot August day steam can be seen building up over its waters.

For those familiar with the site of Bath in England, the site is particularly interesting as it gives an idea of what that site would have looked like before its most recent improvement. The oldest section of the complex dates from the first century A.D. and it was occupied until third Century. 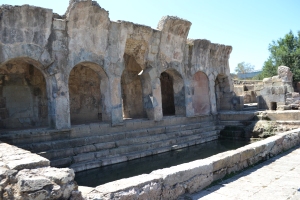 The central focus on the ruins is the 12 by 6 by nearly two metre deep natatio, or bath. This is filled by the thermal spring which arises to the south of the site. These waters were mixed in another bath with cold waters entering from higher above. In such a way waters could be controlled. Other baths exist to the north and a cloaca or channel through which the water drains into the river. Over the natatio was probably a barrel roof, the arches of which remain. These arches enter the most interesting relic a nympheum, which was probably a small chapel. Here Esculapio, God of healing and nymphs were invocated for their guidance and power. 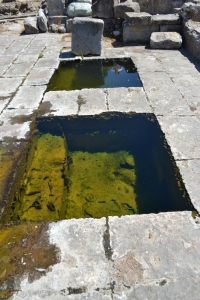 These parts formed the original nucleus of the spa complex of which, a frigidarium, tepidarium and celidarium complex was used utilising cold springs.

The source of the waters

It was thought that an aquaduct provided water from Mount Grighini but it is noted that as water on site is still so abundant it would have arisen here. For above the Roman ruins are the large tanks holding the spring water. These have been carved into the rock and are despite their algae covered waters still flowing from here and through the complex. The hot spring arose separately in such a small distance from the cold springs a quite amazing fact for these early engineers to note. This hot spring is also a sulphur spring which has lead to healing properties.

These waters of Aquae Ypsitanae were famed as the S’abba de su figau’ – the waters of the livers. However they are also said to be able to cure and relieve skin complaints such as dermatitis and psoriasis, bone ailments and respiratory problems. The hot waters also have had a more functional use. The large oval pools located outside the enclosed ruins were used, and may indeed still be, used for washing clothes. Touching the water it is exceptionally hot being 56OC

The Bagnio and beyond 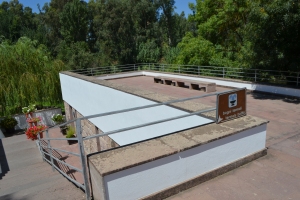 Whist it is not beyond realisation that one could still utilise the spa site today. The town of Fordongianus is still a functioning Spa town beyond the site. A few metres from the Roman site until recently visitors could experience the hot waters in a Bagnio Termali. This nestles closer to the village and below the level of the road. Despite its fairly modern appearance the site dates from 18th century. The site derivs its waters from another spring which fortunately are slightly colder being 44OC Sadly it appears that the site is now closed it but spa bathing still survives with an enormous investment being made into a more considerable spa complex. As the small linear building is only big enough for a normal sized bath, the new establishments located more centrally in the town. These farm more modern hotel facilities still provide the same, if slightly more modernised, wellness treatments provided by the Romans – little changes. So not only can we marvel here the cleverness of the use of both cold and hot springs which the Roman engineers manipulated excellently to provide a tepid and more tolerable water, we can see its use remains today.