← Between the tower blocks and the Anglo-Saxon…St. Alkmund’s Well, Derby
The Romanesque beauty of Sardinia’s Santa Sabina and the little known pozzo sacro Su Cherchizzu →

Springs by the seaside…beside the sea

With the sun shining, many of us will head to the seaside to soak up the rays, do some rock-pooling and eat some ice-cream, however hundreds of years ago, when the sea was predominantly an industrial location and the therapeutic nature of sea bathing unknown, pilgrims would visit the sea-side to sample its sacred springs as they would elsewhere.

A classic example is recorded by Wallis (1769) in his Natural History of Northumberland, he tells us that:

“Among the sea-rocks, on the north side of the church at Newbiggen, is a sacred fresh-water spring, called St Mary’s well, over which the tide flows.”

Such an arrangement would mean that often springs would have greater powers because the high tide would mean they were available for less time. A similar spring being St. Agnes’s Well Humphrey Head (Cumbria) where at the foot of the limestone cliffs is the spring arising in a rectangular chamber. A similar well has already been discussed at St. Govan’s chapel, but sadly dry. In Wales, a location which cannot be bettered for grandeur can be found at St. Mary’s Well on the Lleyn Peninsula. Regularly covered by the tide with its salty water, the spring remains fresh at low tide.  The natural spring was said to be the location pilgrims to Bardsey Island would stop. To get a cure it is said that a mouthful of water from the well would be needed as you would climb the cliff above to walk around the chapel above three times.

The most famous seaside spring is the most evocative, Holy Well in a sea cave Holywell Bay near Newquay (Cornwall). Many doubtlessly pass this sea cave on the way to the sea without a second thought. Many hundreds of years ago it is said that the bay was littered with crutches as evidence of those who had been cured there. Despite no sign of any obvious Christianisation, a legend is told of its creation. It is said that the cave was one of the places that the cortège carrying the body of St. Cuthbert rested here on their way to Iona. However, that sounds like a convenient story to cover and explain attendance at this most pagan of wells. The water trickles across multicoloured natural basins of limestone, in the dim light of a torch, the pinks and blues, provide a remarkable view of a peaceful refuge. 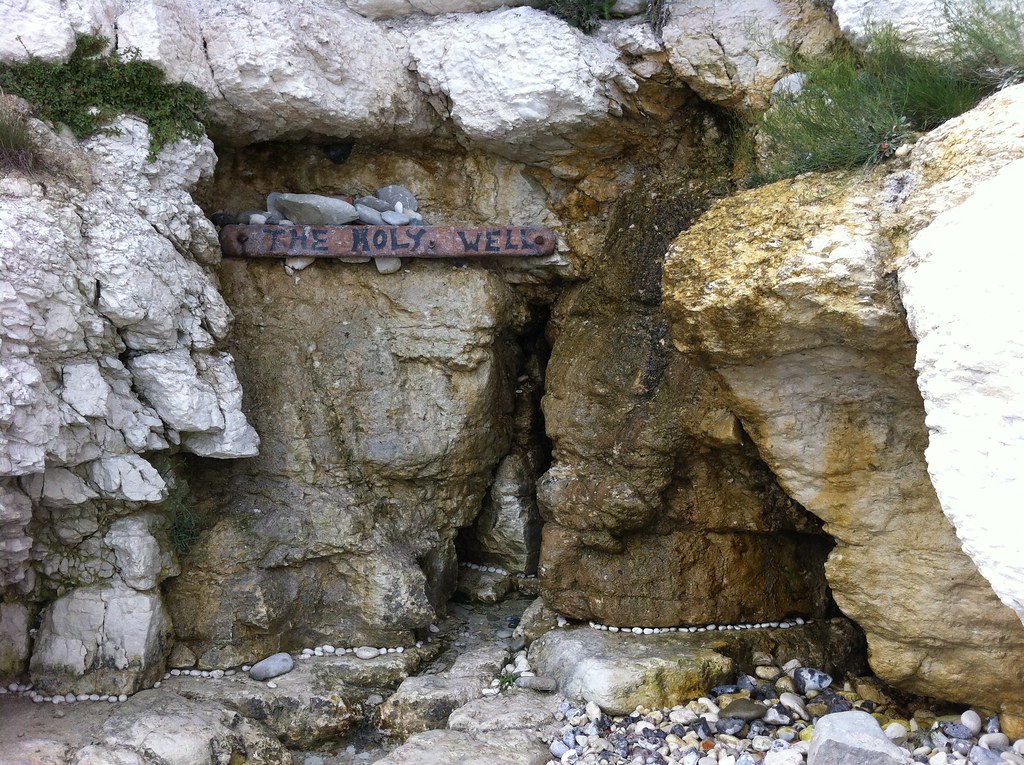 Not surprisingly, being a fluid environment, such spring can be lost to the erosive power of the sea. Such may have happened to that at Eastbourne (Sussex), first recorded in the 15th century. Described by Horsfield (1835), no exact location is given. It reports:

“the chalybeate springs at Holywell, a short distance west of the Sea House, are highly worth the attention of the visitor. The quality of the water is said intimately to resemble the far-famed springs at Clifton.”

Then in 2010 they were re-discovered, repaired and rededicated and cures are now reported…goes to show that some seafronts can provide all aspects, so if you are off with bucket and spade consider there may be a sacred spring somewhere to give a quench to the spirit and thirst perhaps.

← Between the tower blocks and the Anglo-Saxon…St. Alkmund’s Well, Derby
The Romanesque beauty of Sardinia’s Santa Sabina and the little known pozzo sacro Su Cherchizzu →