The road through to Macomer from Nuoro passes one of the island’s most iconic views, the Romanesque beauty of Santa Sabina beside a large intact Nuraghe from the 1600 BC laying on the desolate plain. Nearby were two giant’s tomb, but these was destroyed.

The church is a wonderful relic and is unique in Sardinia. Dedicated to the cult of Santa Sarbana and was probably constructed in the mid 11th century. It is made of three distinct parts; the central circular covered by a dome and two side compartments covered with barrel vaults. It is thought that the site was an early Christian baptistery. This is perhaps significant and may hide a lost significance for a site close by.

Like the giant’s graves, similarly, my indispensable archaeology guide related to the sacred well in the complex but notes ‘no traces are found nowadays.’ I visited the complex and had left it there but reading the leaflet given out it noted the survival of Su Cherchizzu, returning to the site I managed to explain what I was looking at and was directed across the road and up a dirt track, 400 metres from the more noted church. 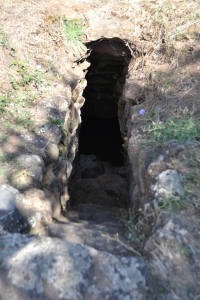 The site was discovered in 1881 by Vivanet, but then largely forgotten being abandoned. It was not until 1982 that a survey by Foschi revealed more including some pottery fragments but it was not dated. The well is found in a small enclosed area and is completely buried beneath the ground. Twenty steps, 50-70 cm wide and five metres long take us beneath the ground and reveals it to be full of water. Looking up is a stepped ceiling and a circular well tholos of two metres. The structure is made of basalt to maintain the water in the well and it still had some considerable volume in the hot August sun. Entering the chamber you immediately became divorced from outside yet again and wonder what uses these waters had many centuries ago. 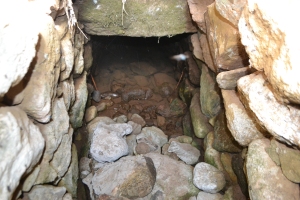 Posted on August 19, 2015, in Italy, Sardinia. Bookmark the permalink. Leave a comment.