← If you go down to the woods today….Rebra’s Well, Wargrave, Berkshire
A Holy bath house…Rushton’s St Peter’s Spring and Bathhouse folly, Northamptonshire →

A sign off the main road reads – Rebeccu medieval village – the road winds; upwards past an old Gothic Aragonese church surrounded by grazing sheep to the small hilltop village of Rebeccu – a lost village 508 metres above sea level. That’s is not to say that the village is deserted; just that its’ population has reduced and indeed bar a small bar in the compact village square the place was deserted!

This an ancient community with evidence of centuries of inhabitation – the Tres Nuraghe for example. The hills around are peppered with rock cut cave tombs and within the larger parish is the incredible Sant Andrea Priu tombs with their caved sacred cow, Roman wall paintings and early Christian iconography…..an incredible example of ritual continuation – indeed when I visited there appeared to be animal skull placed rather than left on the summit of the caves suggesting that such rituals survive in modern Sardinia.

At this village bar I enquired about the Fonti Su Lumarzu. They knew it but it appeared to be a distance away; quite remote and removed from the village. Indeed a small wooden sign indicated its location taking a small track through an area called the wilderness. Talking this path it flowed down the valley to an open area when I was assured I would find the well. Just before this and beside a stream is a small well, well I assumed it was, it was dry but resembled one. Indeed, one could be confused to think this was the exact site although it lacks the isodomic nature of the basalt blocks or the basin. Indeed, although there is some old fabric this would appear to be modern – probably medieval!! 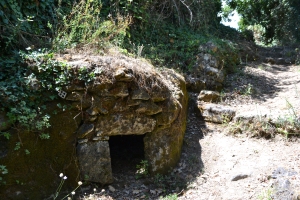 The well is a perfect miniature pozzo only a metre six in height and 97 cm wide at its base. Constructed into the hillside to take advantage no doubt of the spring which arose here and is channelled through a canal with T blocks. The well is constructed of the usual basalt being partially isodomic, some blocks being smaller than others, probably to fit into its location. One can still see evidence of the original clay and lime based mortar on some. The spring fills a circular basin with a monolithic bottom conch. Looking up it is clearly enclosed with a tholos as typical. The water is accessed from a square cut opening. Water then flow beneath the floor of a paved rectangular vestibule only around 5 metres to 2, appearing from a hole and down a grooved stone into a small brook.

Little is recorded concerning the use of the site but a nice suggests perhaps votive offerings. Taramelli (1919) in his Fortezze, recinti, fonti sacre e necropoli preromane nell’agro di Bonorva, discovered miniature Nuragic pottery jars which may have had a ritual function but equally could have been domestic. Interesting sherds of such pottery were found in the mortar when the site was restored in 2004. Was this purely for bonding or did it signify a ritual deposit? Certainly like more substantial Pozzo, there are lateral and frontal benches, for ‘priests’ or although equally for those wanting a rest, wait or chat at the well (many British Holy wells have such arrangements and it should be noted these are purely functional in use). What is interesting was the find of Roman Imperial coins in this vestibule. So it is clear that like the town the well continued generation over generation to provide both function and perhaps ritual to the settlers on this hill. As indeed the fresh flowing water does today despite a flowing spring beside the church which fills a substantial rectangular basin. Perhaps this water is better, it certainly was a delightfully refreshing draft and needed as I ascended back up the hill and into modernity..

← If you go down to the woods today….Rebra’s Well, Wargrave, Berkshire
A Holy bath house…Rushton’s St Peter’s Spring and Bathhouse folly, Northamptonshire →