“This township is situated on the left bank of the river Elwy, and near that river is a beautiful and romantic dingle, in which is a fine spring, called Y Ffynnon Fair, discharging about 100 gallons of water per minute, and strongly impregnated with lime. It is enclosed in a richly-sculptured polygonal basin, which was formerly covered by a canopy supported by ornamental pillars, and was then much resorted to as a cold bath. Adjoining the well are the ruins of a cruciform chapel, in the decorated and later English styles, parts being overgrown with ivy. Prior to the Reformation, this was a chapel of ease to St. Asaph, and was served by one of the vicars to that church. ……”

Ffynnon Fair must rank as one of the most romantically atmospheric sites in the whole country. It has been a site which has graced many books on the subject – even one on English well traditions. It has been immortalized in poetry and its ruins do not disappoint. I have had this one site on my to do list for some time

On my way to the well, I came across an elderly gentlemen. He came towards me and I said have you been to the well. He relied, he could not find a way in…it could not be that difficult I thought and realising he looked rather crestfallen at not succeeding at his mission I turned him and around and thought I would help him. He was not best dressed for well hunting appearing to have sandals and socks which soon became sodden as we had to cross the small brook formed from the springhead. I asked him whether there was a reason for his visit. He said he was an artist and was planning to paint a number of holy wells using the water from the well – I took his name but to my regret I failed to remember it. At the well we soon found the old rusty gate, untied the loop and let ourselves in, closing it behind for fear of letting some livestock here. 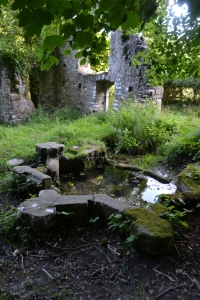 The site has a delightful restfulness and one could clearly see even as a ruin how this chapel could be a pilgrim site. The gentlemen asked me to fill his beaker and I obliged. He then produced a pen wrote the name of the well and date and duly vanished!

What we can see is a bit of an enigma. The well chapel is a star shaped structure around eight feet whose water flows in channel under the chapel. The well chapel is said to have been built in the 13th century which additions and rebuilding in the 1500s. What remains aside from the well is a chancel, a north and south transect under which the water flows, with some Perpendicular tracery in the windows and doorways. Paul Davis in his ‘Sacred Springs’ believed like St Winifred’s Well, the well chamber had elaborate vaulting over it, probably contained within a projecting wing creating a cruciform plan. He also believes the well could have been a hostel for pilgrims – all interesting theories but unsupported.

This was another site for clandestine practices. It is said up until 1640 marriages were performed here – probably Catholic ones. It seems likely that the place was a place of pilgrimage like St Winifred’s past the Reformation but if so how did it become so ruinous?

The water was quite cold on that particular August day, typical of waters associated with the cures its water claim to give for rheumatism and arthritis. There was also claimed to be a ‘sweet scented moss much esteemed by pilgrims’, that presumably once found at St. Winifred’s Well on which this well was on the pilgrim route to. Audrey Doughty in her book ‘Spas And Springs Of Wales’ suggests it was used for fertility and eye complaint, but I am unclear what her sources are. There appeared at some point possibly to develop the waters as a minor spa in the Victorian period as a small bath was excavated beside. However, by this time it was already becoming the picturesque ruin attracting poets and artists such Gerard Manley Hopkins (1844-89) Jesuit priest and poet and Felicia Hemans 1793-1835 who wrote Our Lady’s Well:

“FOUNT of the woods! thou art hid no more From heaven’s clear eye, as in time of yore. For the roof hath sunk from thy mossy walls, And the sun’s free glance on thy slumber falls; And the dim tree shadows across thee pass, As the boughs are swayed o’er thy silvery glass; And the reddening leaves to thy breast are blown, When the autumn wind hath a stormy tone; And thy bubbles rise to the flashing rain,— Bright fount! thou art nature’s own again!

Fount of the vale! thou art sought no more By the pilgrim’s foot, as in time of yore, When he came from afar, his beads to tell, And to chant his hymn at Our Lady’s Well. There is heard no Ave through thy bowers, Thou art gleaming lone midst thy water flowers! But the herd may drink from thy gushing wave, And there may the reaper his forehead lave, And the woodman seeks thee not in vain,— Bright fount! thou art nature’s own again!

Fount of the virgin’s ruined shrine! A voice that speaks of the past is thine! It mingles the tone of a thoughtful sigh With the notes that ring through the laughing sky; Midst the mirthful song of the summer bird, And the sound of the breeze, it will yet be heard!— Why is it that thus we may gaze on thee, To the brilliant sunshine sparkling free? ’T is that all on earth is of Time’s domain,— He hath made thee nature’s own again!

Fount of the chapel with ages gray! Thou art springing freshly amidst decay; Thy rites are closed and thy cross lies low, And the changeful hours breathe o’er thee now. Yet if at thine altar one holy thought In man’s deep spirit of old hath wrought; If peace to the mourner hath here been given, Or prayer from a chastened heart to Heaven,— Be the spot still hallowed while Time shall reign, Who hath made thee nature’s own again!” 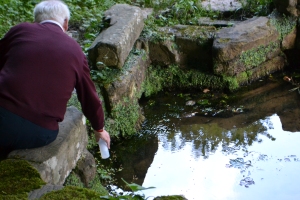 Her work included a sketch which suggests that this ruin is not all what it seems. In particular her drawing shows the west wall of chapel only been a few feet high and no bell tower. More shocking is the lack of a star shaped basin. This has been used for well researchers to suggest a date and construction in line with that of Holywell’s St. Winifred’s Well. Was the site rebuilt in the Victorian period by the landowners as a quaint folly and a pretend St Winifred? Considering its time exposed to the elements it is remarkable well preserved! Indeed research has indicated despite the attempt to reconstruct via drawings a chapel akin to that of St Winifred excavations show that the well was never actually enclosed in the chapel. It was not thus a well chapel but a chapel beside the well! Water would thus run through the chapel in a manner similar to St Clether’s Well, Cornwall.

But pretend or pilgrimage site…one verges towards the later of course, this is a delightful site which must be on anyone’s list of North Wale’s sacred springs.