A tree, a bird and a holy well: Bisham’s curious Elizabeth’s Well 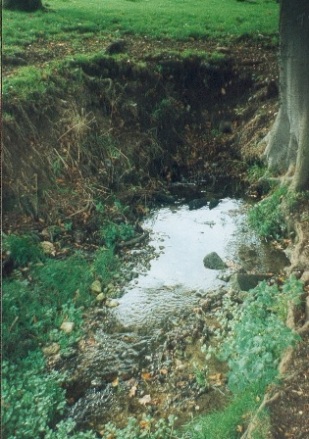 Laying on private farm land is one of the most curious holy wells in the country. A well associated with a curious 14th century legend. The earliest account is as a place name Holywellfette in 1534.  Compton (1979) in his work on Bisham Abbey records:

“A spring of water that rose from beneath a chalky hill in a field that for some time took on the name of Holy-well. The site, now being disfigured by the making of a road, is on the left at the foot of Bisham hill, coming from Maidenhead”

The well had been associated with the curing of a man who bathed his eyes in the well. Nothing unusual there but the cult that developed obviously concerned the religious authorities. In short it records how in 1385 Bishop Erghum was attempting to prevent ‘pilgrims’ from Marlow and Wycombe visiting a well at Bisham. It is stated:

“to the Bishop of Lincoln urging him to take steps against those commiyting idolatory at the new well near Bustleham.”

What is more unusual is that it was associated with a tame bird who sat on a nest over the well and would not fly away, could be handed and placed offerings in its nest. According to the Bishop they were:

“blinded by the phantasy of diabolical deceit”

The report records in Latin as follows:

“And because, as stated in place, the spring, according to which, moreover, a bird makes its nest in a tree which men touched, as it is asserted, is not gone, but it is enough for domestic and tamed in the nest is laid to rest in peace,

His eyes just wash away the heat of battling autumn dour and drink more than usual superfluous humectants, his eyes rheumy cold the water naturally functioning cold feel, that counts for a miracle now believed by many erroneous blind leniency offending;

Hence, in these modern times to the same source, as many flock to the holy place, and there they must not show adoration. Some said the bird in the nest, which you provide nefarious profane offerings with ugly devotion. This is a scandal of our holy mother church scandal and disastrously prejudice the Catholic faith and is an example of many of them and so that the aforementioned idolatry a grave danger to souls.”

This profane and heathen devotion appears to be more about the bird’s nest and its bird who’s tameness was put down to the holiness of the place. A peculiar cult had thus developed. However, it was possible that the Bishop was wrong in viewing the bird as part of the cult. The leaving of money deposits in the nest was probably because it was a convenient and safe place rather than being ‘for the bird’.

The Bishop had informed them that the coldness of the water was responsible for the cure and the rural dean was ordered to fill in the well and tear up the tree. Excommunication was threatened against anyone who visited the site. This was apparently done, but it is clear at some point the well was uncovered. Presumably the bird flew away.

The cult of Elizabeth I

I have made the connection before between holy wells and Elizabeth I. It is evident that as the populace still needed holy wells, and the move to protestant ideology prevented this. However some wells appeared to have been rededicated to Elizabeth at the height of her cult and thereafter, perhaps allowing legitimate visits. The cult was short lived perhaps as scientific understanding allowed the development of spas. The earliest reference to the site is the John Nichol’s 1788 Progresses and public processions of Queen Elizabeth:

“In this Parish in the fields called the Moors is a well which still bears the name of Queen Elizabeth’s Well, and seems to be the only remembrance left of her frequent visits to the spot.”

In this case local legend states that when she stayed with the Hoby family of Bisham Abbey during her three day stay used the water to bath due to its traditions of healing. This traditions continued until recent as Compton (1979) notes:

“Local belief in the healing properties of the spring, however, lingered on in the minds of those who, traditionally and by birth, were part of the district. Less than a lifetime ago there were people still living who claimed that application of the water (which broadens into a stream running at the base of Quarry Woods) had relieved some complaint of their eyes or bettered their vision. In 1905 the water, after being analysed, was said to owe any curative effect to suspended gases.”