Possibly one of the easiest of North Wales’s holy wells located a few feet from the roadside down a cobbled path, all part of the local vicar’s attempt to landscape and preserve the site in the 1970s. A plaque on the wall tells us it is Ffynnon Sara. The well itself consists of a large stone lined bath like structure, 4.5 by 2.3 metres and fills to around a metre depth although when I visited it appeared only a few centimetres in depth, the water being reached by four steps in one corner.

The well was once firmly on the pilgrim’s trail from Holywell to St Davids being marked on maps until the 17th century. A cottage was located nearby and may have been used by visitors. Peering into the duckweed covered sluggish water it is difficult to see how these waters had thought to have a wide range of powers. Amongst the usual claims of eczema and rheumatism, cancer was said to be cured here. Patients would bathe in the well and leave pins! Presumably those who bathed afterwards would be aware of this. Crutches were said to have been left in the cottage which existed on the site, said to have been lost in the 1860s. Now a sign proclaims unfit to drink!

Who’s well is it?

There has been some confusion over the origin of the name. Whilst the name could easily derive from the owner of the nearby lost cottage, possibly a family name, others have sought to associated with a saint. St Saeran, a sixth century saint has been suggested. He established a monastic settlement at Llanynys, eight or so miles from the site. However, there is no reason why they should be the original dedication. Indeed in the 17th century it was called Fynnon Pyllau Perl – pearl ponds – perhaps after pearl producing mussels in the water.

Upon visiting the well I was greeted with a delightful encounter. Peering into those murky waters was a lady who unbeknownst to her got me interested into holy wells in the first place. It was author Janet Bord. With her was fellow enthusiast, Tristan Grey Hulse (founder of the Source new series, author and St Winifred Wells companion) and a number of others. They had simply stopped there to have a quick look and were actually only visiting churches. I suppose after visiting so many wells it was bound to happen but it was a fitting finish to my North Wales Holy well pilgrimage. 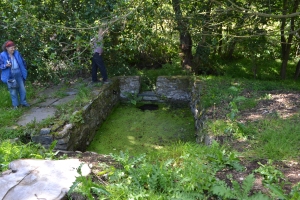