A holy well reborn or a new holy wells for the 21st century? Eastbourne’s Holy Well 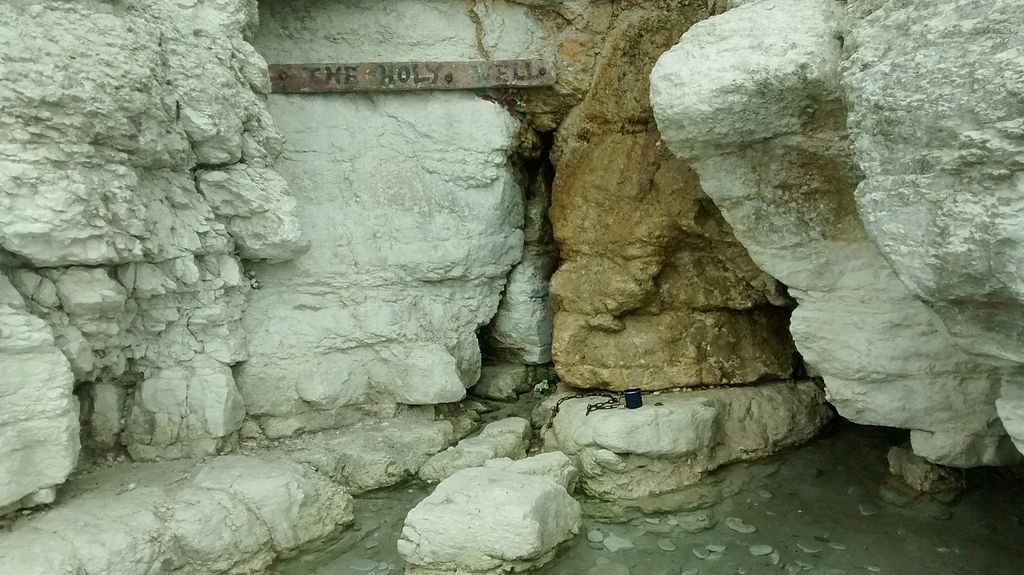 For many years, the only evidence of Eastbourne’s claim in sacred spring history was the area named Holywell, favourite of the retiree. However, since 20 the town has some real tangible evidence for a holy well, although whether the spring is the original holy well is open to debate.

The first record of a settlements called Holywelle dates from 1316 and by the 15th century the name Haliwell, Hallywell is recorded. Yet the first reference to a spring is by James Royer (1787) East-Bourne, being a descriptive account of that village who reports that:

“one of the springs is called Holy-well, supposed to be so named from the many advantages received from drinking those waters”.

In in the anonymous 1861 book Eastbourne as a Resort for Invalides [sic] it notes:

“At Holywell there is a chalybeate spring, the curative properties of which have given the name of the Holy Well. However, a subsequent analysis of the water demonstrated that it had no particular ‘curative properties”.

A location has been suggested by historians by associating it with the Chapel of St Gregory once near the South Cliff Tower in Bolsover Road, however it is thought that this was too far from the current area so called. Thomas Horsfield (1835) History of Sussex noted:

“the chalybeate springs at Holywell, a short distance west of the Sea House, are highly worth the attention of the visitor. The quality of the water is said intimately to resemble the far-famed springs at Clifton”.

George Chambers A Handbook of Sussex (1862) records that:

“they have however been analysed, at the instance of the present vicar, and found to consist of simple but very fine surface water.”

The well was apparently rediscovered in 2009 as a spring arising at the foot of the chalk cliff. A wooden sign has now been affixed as well as a cup and chain. Akyildiz (2011) notes in Landscape and Arts Network Articles – The rediscovery of a Fresh Water Spring beside the sea: a local holy well?

“The low stone wall built by Dan and fellow helpers, Pat and Shaun, is both a built physical structure designed to protect the site and a creative act of care. All these three have a passion for the well and provide their labour for free; they say “We feel we are doing a job of worth at the spring and that we are helping people access an alternate source local freshwater…the Holywell spring is such a peaceful place to be, and we have made many new friends here.” The low wall of large stones gathered from around the site protects the spring – and its vital source: the spring water.”

He also notes that a local Catholic church has blessed this site twice and on each occasion has attracted a gathering of nearly 50-70 people and in 2014 there was an evening concert at the well with a New Age flavour, so it is good to see this local spring being embraced by its local community, whether is the titular spring is unclear however.