← The hidden well on the hill – St Ann’s Well of St Ann’s Hill, Chertsey
The Holy and Ancient Wells and Springs of Gloucester – Our Lady’s Well, Hempsted →

An abecedary of Sacred springs of the world: Ethiopia

“Every morning, before six o’clock, a throng of men and women make their way to the edge of the ancient city of Gondar in northern Ethiopia. They are among many from across Ethiopia who have risen early to attend a holy spring in search of healing for their physical, spiritual and mental disorders. Some have walked for days from the remote countryside having heard of the power of this water at Ba’ata church. Others come from Gondar itself. Still more have taken the bus from the capital, Addis Ababa, 400km (250 miles) to the south. They believe that the cure they will find here will be more complete than any offered in the government hospitals in the city.”

Ethiopia is well endowed with notable springs. Many of them are simple springs such as Burkito where hundreds each day bath in the hot waters of the volcanic spring whereas others are developed into spas. Indeed the hot springs of Wondo Genet, Yirga Alem, where in 1964 it was developed by Haille Selassie by establishing a swimming pool and hotel

These springs are said to cure a wide range of medical issues. The list includes prevention of musculo-skeletal disorders (such as arthritis), chronic diseases of respiratory system (such as bronchitis, asthma), Chronic diseases of the digestive system, metabolic diseases (such as obesity, diabetes) and dermal diseases and allergies (such as atopic eczema, acne). Many claim these properties as spas other have a more spiritual sites such do the sacred springs of Gondar. Which at the break of dawn each day is a scene of religious reading, blessings, prayer, baptism and exorcism!

Unlike some other holy springs, the site is restricted site. The site, a walled around spring head is only accessible to the Ba’ata church’s priests who distribute the water, often sprinkling it to the pilgrims.  Chambers (1999) notes that when she visited:

“An elderly woman is assisted by her two daughters. A young peasant girl stands to explain to those around her that she is poor and has travelled far. A few onlookers drop cents into her cup to help her pay for the treatment she will receive here. An elder from the community prays from a well-thumbed book of prayers and disturbs the flies with his horse-hair whisk. And a woman soothes the disabled child she is carrying on her back in a leather harness decorated with shells.”

The site is sacred to a tribal group called the Qemant who despite adopting Christianity still have pagan traditions. Gary R. Garner in his 2009 Sacred Wells states that:

“the Qemant are descendents of the Agaw and they continue many of the Agaw traditions including worshiping  a sky god, and recognising personal spirits: genii loci, and sky spirits…the Qemant continue to annually sacrifice a white bull or sheep to the geni loci that are residing in…holy geographic places.”

These the author suggests are springs. Indeed, Lake Bishoftu remains a site of annual sacrifice by the country’s Muslim and Christian groups. 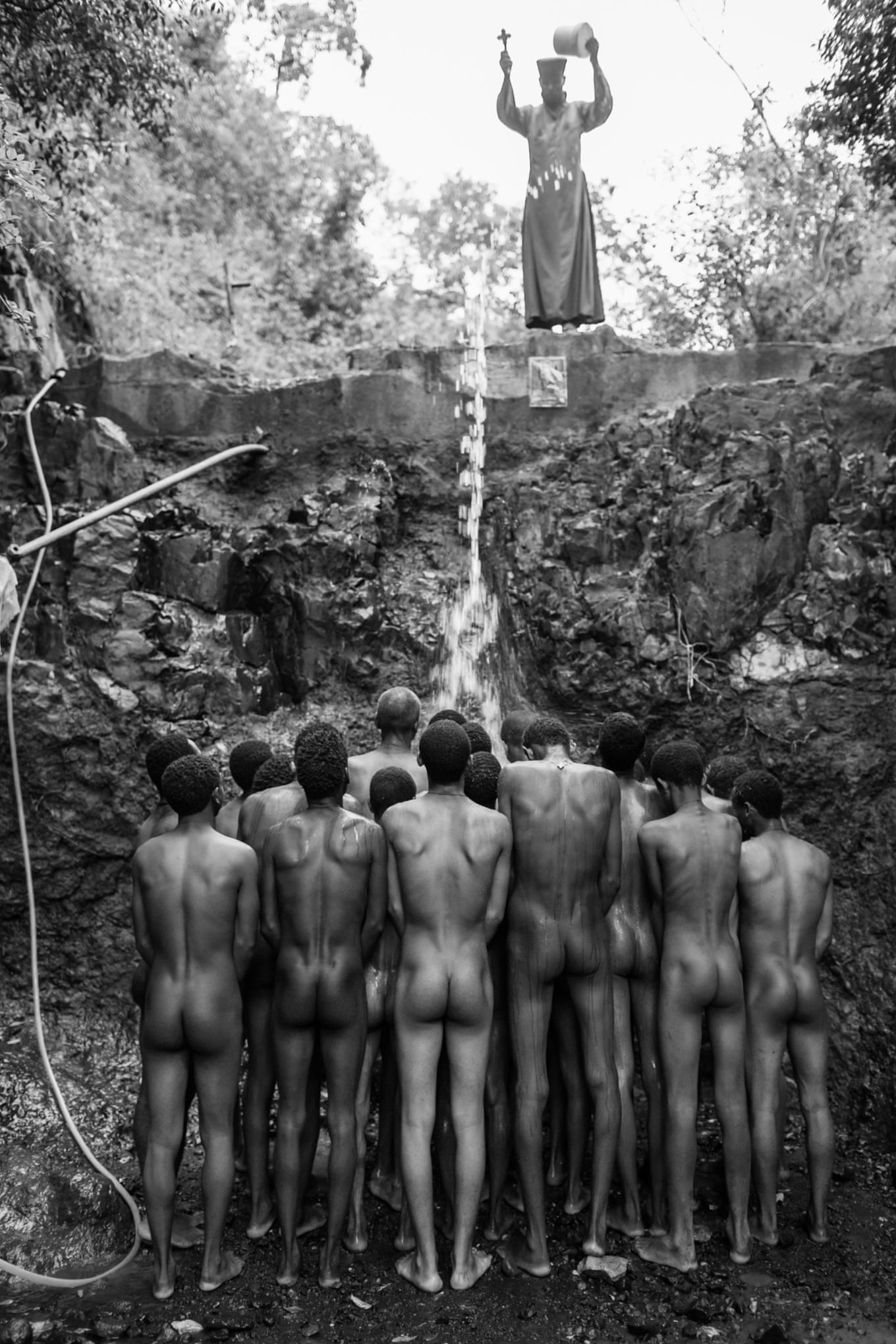 A priest holding a cross throws buckets of water over a group of men. Holy water is believed by many in the group to cure diseases including HIV and cancer. From https://www.theguardian.com/world/gallery/2015/may/18/mass-exorcisms-performed-ethiopian-orthodox-church-in-pictures#img-5 Copyright The Guardian

At the sacred spring of Gondor. During the ceremony the water is said to be purified by retelling a hagiographical story of the Life of Saint Teklahaymanot. A saint said to have stood on one leg for so long in prayer that it went gangrenous and was cut off. By retelling the story it is said that the demons are driven away! Once done the water can be utilised. Chambers states that once the reading was done:

“The old priest is now at liberty to offer his blessing to the people who are already clamouring for his attention. A young woman seeks a blessing for her first pregnancy, another brings her sick child to be touched by the priest’s iron cross.  A man with gastric problems has his stomach rubbed with the cross and is recommended to take the holy water for seven days. Another man reports difficulty in walking and duly has his legs massaged with the cross. The reading continues for over an hour and is only interrupted when a small child swallows a cent and needs a hefty thwack on the back to bring it flying out, to the immense relief of his mother.”

There are two types of pilgrim to this water. Some come to receive baptism. Many unclothe. This is undertaken by a priest who holds a cross upon the supplicant whilst the other hand holds a hose which douses the person with baptism water. The other group seek its purging affects and ask for water to fill cans and bottles. The deacons present dutifully fill these cans with holy water and each attendee pays 50 cents, a recommended price for seven days of treatment. The water is potent stuff. It is recorded that once the water is collected the pilgrims disperse to various rocks to drink it. Why? It is because the water has strong purging effects – rapid diarrhoea or vomiting will result! This is good because it will cleanse the body of the evil spirits within or whatever is calling the disease. These evil spirits are drawn out by the priest, the water causing them to be shouted out. It is said that the priests makes a plea with the demon to remove themselves over the seven day treatment.

Perhaps the most noted Ethiopian ceremony associated with water is orthodox Timkat, itself meaning baptism being as it does on the 19th January celebrate Jesus’s baptism in the Jordan. Recorded by Author Donald N. Levin in his 1974 Greater Ethiopia: the evolution of multi-ethnic society it is noted that the day starts with the divine liturgy is celebrated near a stream or pool early in the morning around 2 am, this nearby body of water is then blessed and its water sprinkled on those present in a form of symbolic renewal of baptismal vows. Many jump into 17th-century Fasiladas’ Bath on the third day after the priest enters the pool at 7 am, praying and dipping his cross in pool.

Ethiopia has a rich water heritage to explore

← The hidden well on the hill – St Ann’s Well of St Ann’s Hill, Chertsey
The Holy and Ancient Wells and Springs of Gloucester – Our Lady’s Well, Hempsted →