← An abecedary of Sacred springs of the world: Some Rag Wells of France
St. Ethelbert’s Well Hereford →

Searching for St Audry’s Well on the Isle of Ely 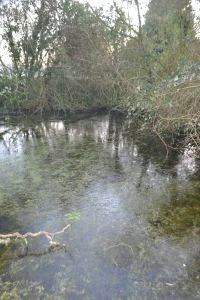 The best recorded holy well in the Cambridgeshire is that of St. Audry’s Well (TL 540 801). It is noted in the 12th century that a spring arose at the place where the saint was first buried

St Audry or rather Ethelreda or Æthelthryth was an Anglo Saxon saint who was a 7th century East Anglian princess, one of four saintly daughters of Anna, queen of Northumbria and Abbess of Ely. Interestingly she was born at Exning in Suffolk where a well is also associated with her. She died and was buried at Ely and it is recorded by Bede that when her body was disinterred her body was uncorrupt as such her powers and clothes were said to have special powers. She was reburied in the Cathedral and her shrine remained until the reformation. She is best known for the term tawdry for rubbish,  a term which derived from the poor quality clothing sold at fairs on her feast days.

In the 12th century it is reported that:

“If any sick people take a drink from this spring, or have been sprinkled with its water, it is reported that they subsequently recover their original vigour…. in account of her merits, are acquainted with remedies and assiduous in curing the sick”.

It is noted that the monks made the spring site into a pit like cistern so that they could collect some of their water.  Several miracles are associated with the well. One tells how a blind woman washing her face and eyes became able to see, how a man travelled from Northamptonshire to be healed and found the door locked. He was apparently barred entrance and was told that there was no bucket at the well and nothing to collect it with. He did not take no as an answer and so barged his way in where he found the well overflowing into the courtyard and thus cupped some water into his hands. He evoked the saint’s name and as he did so begin to recover. Another story tells how a woman fell into the well after accidently being pushed in by a crowd at the well. She was apparently left in the water for two hours and was found still alive by the monks.

The established site of the well is at Barton Farm to the east of the Cathedral. The site is shown on a Moore’s map of the fens dated in 1684 shown as St. Aldreth’s Well.  According to Hippisley-Coxe in his 1973 Haunted Britain this site still survived as a muddy pool in a clump of elms near Barton Farm.  The spring fills a small tree lined pool on the edge of the grounds of Ely’s Cathedral School, which has absorbed Barton Farm, and the Golf course. There does not appear to be any evidence of fabric but at some point, some brickwork has been used to create a channel to allow the water to flow way showing that the spring is still active.

Conversely the metrical Life and Miracles of St Æthelthryth by Gregory of Ely, c.1120 states that ‘the holy precinct of the church includes a spring’, but does not identify this as a holy well; the original grave of St Audrey lay:

“somewhere in the vicinity of the former Bishop’s Palace, the area close to the Fountain Inn, and the present St Mary’s Church, where the water-table is high.”

“…where the people of the neighbourhood do now resort to drink the waters of it, it being a sort of mineral water”.

This suggests two things, one that it was an arrangement like current St. Withburga’s well at East Dereham and that it was nearer the Cathedral. Indeed I was shown by Mr Hart of Ely School a possible alternative site, a small duck pond in the grounds of the Bishop’s Palace. This however although might be a more likely sight indeed it lay across from the school’s old chapel and in the shadow of the Bishop’s Palace.

Details in Holy Wells and healing springs of Cambridgeshire and the Isle of the Ely.

← An abecedary of Sacred springs of the world: Some Rag Wells of France
St. Ethelbert’s Well Hereford →