← “There is not a wife in the west country but has heard of the Well of St. Keyne” St. Keyne’s Well, St Keyne’s Cornwall.
An abecedary of Sacred springs of the world: Haiti → 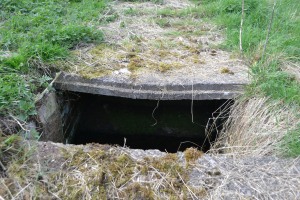 Leicestershire is sadly not renowned for its holy and healing wells, this is despite two works, Bob Trubshaw’s seminal 1990 Holy Wells of Leicestershire and Rutland and James Rattue’s 1993 work on An Inventory of Ancient, Holy and Healing Wells in Leicestershire in LAHS. The majority of wells in the former are either lost or dubious wells, i.e not necessarily holy! One curious exception was the Sister’s Well at Hoton or Prestwold. Trubshaw (1990) records:

“Sisters’ Well (also known as Jacob’s Well) is on the perimeter of the disused airfield. A simple stone structure with steps down and wooden doors stood until World War II but the flow has now been culverted.”

Structurally this sounded like one of the more structure of the county’s holy wells and its loss was a considerable one. Another reason why this site was of interest is due to a local legend:

“A legend associated with this well tells how, during a three-month long drought, a sixteenth century maiden lady called Gertrude Lacey dreamed three times in one night of finding a stream by sticking a pilgrim’s staff from the Holy Land in a specific place. It was located in Langdale Field, and known as Spring Close after Enclosure. A pilgrim’s staff was dug up and, with the help of her sister Grace, she went off to the location. When the staff was stuck in the ground a supply of water was created which ‘has never run dry’. A double effigy in Prestwold church reputedly depicts these two sisters.

It is a common holy well origin motif and is found across the country and even overseas. However, rarely is it associated with secular figures which either emphasises the importance of the sisters or is a story transferred from a lost saint tradition. An interesting well who I thought only remembrance was the farm across from its location Shepherd’s Well farm.

It seemed clear that this was a lost site and then searching on the web for references to well in preparation of my Leicestershire holy wells I was amazed to come across this from Bob Trubshaw:

“In March 2015 the ‘solar farm’ on Wymeswold airfield was being extended. I received an email from Alexander Haddington to say that a friend of his had noticed that an old well had been uncovered to the north of the perimeter track. He thought the photographs his friend had taken ‘would be of interest’. ‘Yes, very much so!’ was the gist of my reply.”

I was similarly very keen to examine the site and photograph it for the book. I contacted the owners of the Solar farm and via a series of emails was welcomed to the site.

The landscape is perhaps the strangest to find a holy well. In a sea of solar cells, panels which spread across the relics of the airbase like a waves on the sea, enclosed in a wooden fence is the well. We removed a cone and some coverings and I peered inside.

The first thing that could be noticed was a series of steps into some deep murky water. The steps nearly reached the top of the concrete lid suggesting there may have been one on which the current covering rested on. The water arose from under an arch which was a right angles to the step and peering in there old stone work could be seen. .

The arch was a strong stone one upon which could be read slightly in the light ‘HL 1851’, did this refer to the Holy Land as the legend suggested? In the article for the Wold’s Historian, a Joan Shaw did some research for Bob Trubshaw and noted:

“The date and initials intrigued us and I was looking through the 1851 census last night to try and identify HL. As soon as I found the name Henry Lacey I was fairly satisfied that it was the Lacey family who had either found the well or, assuming it is older, had built the approach to it.

We looked at a map of the estate, the field appears to belong to the Packe Estate (or did) but the Lacey family owned land close by so it would be likely that they rented it and had perhaps rented it for many generations.” 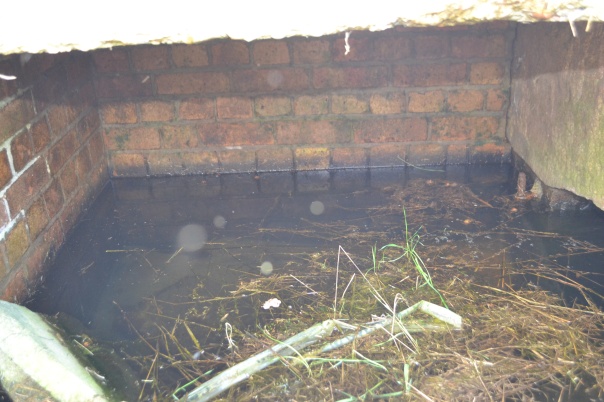 The name Lacey being that of the two sisters showing that the family were keen to continue their beneficence. Either side of the arch was a piece of metal sticking out of the brickwork, which would appear to have been placed there to attach a metal or wooden set of doors on their as can be seen currently on a number of wells as shown below. Perhaps this would prevent the water being contaminated. These doors of course would not prevent it today as the water table has risen here compared to other places.

The site is remarkably well preserved and the landowners are keen to preserve it. I suggested that the whole concrete roof could be fully removed to allow a complete restoration and this may happen in the future. Whatever happens it is great to see this most interesting of Leicestershire holy wells being restored and rising from the ground like the origin spring – it holds out hope for similar rediscoveries perhaps.

← “There is not a wife in the west country but has heard of the Well of St. Keyne” St. Keyne’s Well, St Keyne’s Cornwall.
An abecedary of Sacred springs of the world: Haiti →