“There is not a wife in the west country but has heard of the Well of St. Keyne” St. Keyne’s Well, St Keyne’s Cornwall. An old cigarette card showing a women getting to the well first!

A Well there is in the west country, And a clearer one never was seen; There is not a wife in the west country But has heard of the Well of St. Keyne. An oak and an elm-tree stand beside, And behind doth an ash-tree grow, And a willow from the bank above Droops to the water below. A traveller came to the Well of St. Keyne; Joyfully he drew nigh, For from the cock-crow he had been travelling, And there was not a cloud in the sky. He drank of the water so cool and clear, For thirsty and hot was he, And he sat down upon the bank Under the willow-tree. There came a man from the house hard by At the Well to fill his pail; On the Well-side he rested it, And he bade the Stranger hail. “Now art thou a bachelor, Stranger?” quoth he, “For an if thou hast a wife, The happiest draught thou hast drank this day That ever thou didst in thy life. “Or has thy good woman, if one thou hast, Ever here in Cornwall been? For an if she have, I’ll venture my life She has drank of the Well of St. Keyne.” “I have left a good woman who never was here.” The Stranger he made reply, “But that my draught should be the better for that, I pray you answer me why?” “St. Keyne,” quoth the Cornish-man, “many a time Drank of this crystal Well, And before the Angel summon’d her, She laid on the water a spell. “If the Husband of this gifted Well Shall drink before his Wife, A happy man thenceforth is he, For he shall be Master for life. “But if the Wife should drink of it first,– God help the Husband then!” The Stranger stoopt to the Well of St. Keyne, And drank of the water again. “You drank of the Well I warrant betimes?” He to the Cornish-man said: But the Cornish-man smiled as the Stranger spake, And sheepishly shook his head. “I hasten’d as soon as the wedding was done, And left my Wife in the porch; But i’ faith she had been wiser than me, For she took a bottle to Church.”

This picturesque holy well is perhaps the most unusually associated with the properties that Southery alludes to above. Richard Carew in his 1602 Survey of Cornwall is the first to note the well and its trees:

“I will relate you another of the Cornish natural wonders, viz., St. Kayne’s Well ; but lest you make a wonder first at the saint, before you take notice of the well, you must understand that this was not Keyne, the man queller, but one of a gentler spirit, and milder sex— to wit, a woman. He who caused the spring to be pictured added this rhyme for an exposition : —

‘The name to lot of Kayne befell, No over holy saint,  The shape four trees of divers kind, Withy, oak, elm, and ash, Make with their roots an arched roof . Whose floor this spring doth wash. The quality, that man or wife, Whose chance, or choice, attains, First of the sacred stream to drink, Thereby the mastery gains.’”

Charles Hope (1893) in his Legendary Lore of Holy Wells records:

“It is a spring of rare virtues in the belief of the country people. It is covered in by masonry, upon the top of which formerly grew five large trees–a Cornish elm, an oak, and three antique ash-trees–on so narrow a space that it is difficult to imagine how the roots could have been accommodated. There now remain only two of these trees–the elm, which is large and fine, and one of the ash-trees.”

The Quiller-Couches (1894) consider in their Holy Wells of Cornwall relates to these trees:

“The trees are not as they were in the time of Carew and Norden. The oak, elm, and withy were blown down in a very fierce storm which occurred in the November of 1703. Some years afterwards, Mr. Rashleigh of Menabilly planted the present trees in their place, five in number, — two oak, two ash, and an elm ; and it is a double wonder, firstly, where in such a scant place they get nourishment ; secondly, why by their roots they do not disrupt the masonry, and ruin the well. When standing on the top of the well, all the trunks could be reached by the extended arms.”

However, they then note:

“On my last visit, one of the oaks was much decayed, and supported by a prop. The well has now no architectural interest, the  entrance being a plain round-headed arch of native stone.”

Today these trees have lone gone a result of a repair to the well. Quiller-Couches again note:

“On visiting the well in 1891, we found it in a very dilapidated state, the arch tumbling to pieces. Of the five trees only two are left, an elm  and an ash, both fine trees, particularly the elm.”

These concerns prompted the Liskeard Old Cornwall Society in 1936 to completely renovate the well, guided by A. C. Glubb according to Lane Davies who records:

“The trees decayed, the lane was widened….it all looked very new at first with bright granite stones, but will mellow in time.”

Who was St Keyne?

A daughter of the Prince of Brecknockshire and aunt of St. David, she was said to be a beautiful and very holy women, who was sought by many important men as a bride. She is said to have vanquished serpents from the land by converting them to stone, the remains being fossilised ammonites. She is said to have lived in seclusion but was finally convinced by Cadock to return to which he provided the local people with a water supply by hitting the ground with his staff.

“The well is said to share with St. Michael’s Chair at the Mount the marvellous property of confirming the ascendancy of either husband or wife who, the first after marriage, can obtain a draught of water from the spring, or be seated in the chair.”

It would seem plausible that it was a property derived from a pagan fertility tradition, so unusual is it in its nature. But do people visit it for this? Of this property, the Quiller Couches again comically noted:

“It has been related that Mr. Leah, then rector of the parish of St. Keyne, sent two dozen bottles of this gifted well water to a bazaar in the grounds of Mount Edgcumbe, and that they met with a ready sale at two shillings a bottle, with a loud demand for more.”

When I visited a man was there filling a bottle, I asked him what for and he wryly smiled well ‘just in case’ it was clear he was well aware. I peered into the well, the murky nature of the water, possible as a consequence of a dead mole in it, if I had to drink this to ensure dominance I would be happy to be henpecked!! I much prefer equality anyhow and one wonders in this day and age whether taking a draft was anyway acceptable? 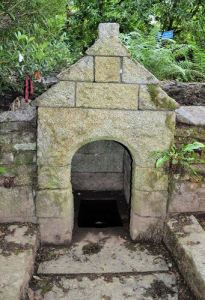