← In the shadow of the train: St Helen’s Spring, Santon Downham, Norfolk
A Staffordshire field trip the sulphur springs of Codsall →

An abecedary of Sacred springs of the world: Latvia

Latvia’s has a number of notable healing and holy springs. Many of them have folklore and associations which followers in the British isles will recognise. Such as Karalavoti’s The Seven Springs who’s waters were used by Sweden’s King Carl VII. Its waters were said to have worked on him when official doctors had failed and its waters remain a popular site. Flowing from the mouth of a lizard as the Kemeru Lizard springs. These are sulphur spring which have rejuvenating powers making old men young again!

Deposits are associated with a number of the countries wells. The Bolēni or Bolenu Spring is rag well where offerings can still be seen in the form of ribbons tied around the tree above the spring, which erupts in a small pool at the base of the tree. 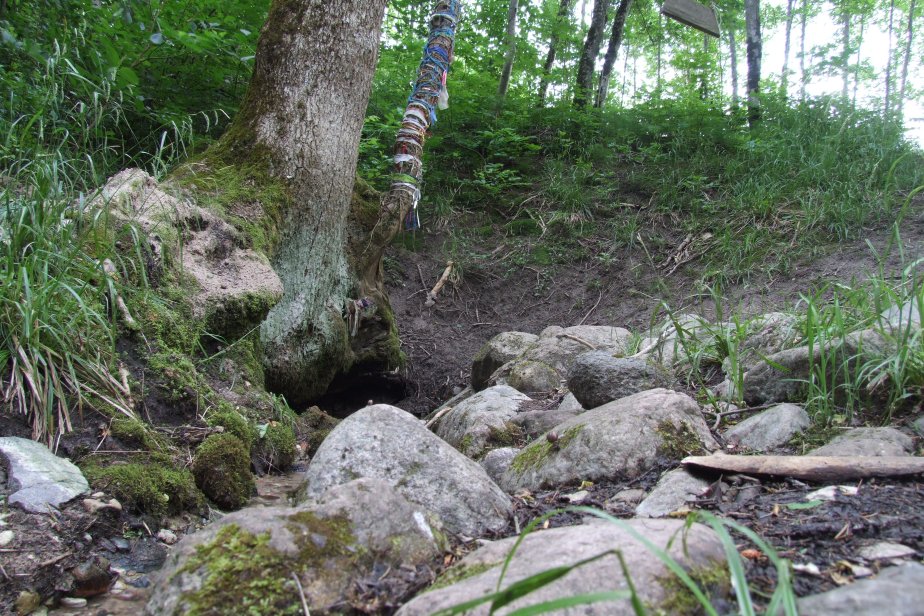 Bolenu spring note the rags tied to the tree

A sulphur spring first recorded in 1739 at Barbele being spring is also associated with the tying of rags to nearby trees. Indeed it is said that when a Riga physician brought 10 ill soldiers to take the water, it too a day to clear the rags. However, in more rag traditions this would have been unwise and deadly perhaps, not for these soldiers as 9 of them were healed. Interest in the well disappeared after the amount of mineralisation was reduced by World War II. The well survives arising in a tank set into a wooden platform.

Another sulphur spring was that of Baldone spring. Which was discovered when it was noticed cows drunk from it and so by the 1800 500 people a year took the cure as the town became a spa town. Yet despite pretensions to be a spa it is evident that those visiting it felt the need to involve themselves in a ritual cult. The evidence for this being rings, including earrings and coins being found in the basin when it was repaired in the 19th century. The spring flows from a pipe set into a small stone which is housed in an hexagonal roofed shelter.

Deities of the springs

The Goddess Laima is associated with Bolenu spring who is said to have cried after breaking a glass she dropped. Her tears made the spring which is said to be good for sore eyes. It is recorded in 1838 that:

“Once in a summer morning when the sun was rising, Laima sat on the edge of the ash ravine. She was weeping, and her tears were running towards the morning against the Sun. The God was passing by and he asked why she was crying. Laima poured out her complains then. She wished the humans good life and health, but then many were afflicted and she felt sorry for them. Then the God made a spring flow out on that spot and ordered the water flow along Laima’s tear way. In this way the Oši Spring in the ravine and the river appeared flowing against the Sun. The spring and river waters were granted healing powers so that all diseases could be healed in them, and Laima would never have to cry again. Since that time Laima has been walking around smiling, she often comes to the Health Spring and the Raganīte River.”

Another spring which is said to arise from tears is that found in the Gutman’s Cave. The origin of these tears being recorded in the Latvian Folklore repository in 1860 notes:

“The Livs’ Chief Ringalds went in war. At home he left his beautiful wife warning her to remain faithful to him until he returned from the war. His wife waited and waited for him, however, still became unfaithful to him. When her husband returned his wife was remorseful and was asking him to forgive, however, Ringalds did not forgive her. He ordered to bury his wife alive in the ground. She has been crying there under the earth up to this day her tears of regret. They have turned into a spring and run out onto the surface of the ground. Thus the spring has eroded the Gūtmanis’ Cave”

She cried so much that the tears created the biggest cave in the Baltics and the spring became healing. The name of the cave is said to derive from the German, Gut being good and mann meaning man, therefore the Cave of the Goodman, the good man being a possible faith healer later a deity. A Jacob Benjamin Fisher in 1778 wrote in the earliest account:

“At Turaida there is a cave which consists of sandstone and is called the “Good Man”.

The spring which still rises in the cave and flows through a stone lined channel out hugging the rock of the cave. It was a site of offering until the 19th century, but no rags or coins are deposited now. These are but a small sample of notable springs and more can be learnt watching this excellent documentary

← In the shadow of the train: St Helen’s Spring, Santon Downham, Norfolk
A Staffordshire field trip the sulphur springs of Codsall →