← An abedecary of sacred springs: Kazakhstan holy and hot springs
In the shadow of the train: St Helen’s Spring, Santon Downham, Norfolk → 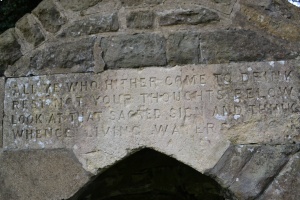 “All ye who hither come to drink/Rest not your thoughts below/Look at that sacred sign and think/Whence living waters flow”.

Ashwell’s Wishing’ Well is one of those frustrating sites. It is clearly a structure of some importance, being one of the best built up in the midlands, but how significant is it?

Peter Binnall (1935) in his Folklore of Wells notes that ash tree are very often associated with holy wells. The Ash was considered a sacred tree in Scaninavian countries and Britain. It was identified as Yggdrasil, the legendary tree associated with the god Odin. It is significant to note that at its roots was a spring where the Norns: Fate, Being and Necessity lived. They used the spring to water the tree each day and used clay from it to keep the tree white to preserve its life.

However that does not mean that a well named after an ash is a culted spring. However, as Val Shepherd notes in her 1994 Historic wells around Bradford Holy Well Ash as well as Syke Well, Priestly which still has ash trees over it, as have Peggy Well, Riddlesden and White Well Harden. Hertfordshire has a significant seven springs in the town of Ashwells which is associated with a Roman shrine. The ash above St Betram’s Well, Ilam Staffordshire was protected by a ‘curse’ which suggested that any person who harmed it would themselves be harmed. Indeed my research has suggested there is an Ashwell in every county but I have not been bold enough to suggest there would be any significance in these names…yet!

Is this the well of the village?

Over the time the name of the village has changed from Exwell in the 11th century; then Assewell, Ayswell, Aiswell (13th century; and then Aswelle, Ashewell, Assewell 14th century and possibly the spring in which the village is named after, although some authorities note is derived from O.E wiella for stream although that does not preclude the spring being the source of course. 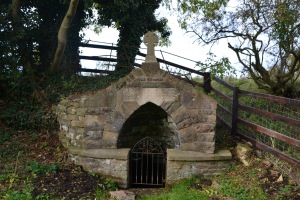 Furthermore,  finding any associated tradition or history is impossible.  The name wishing well is a modern term it appears unsupported by historical evidence. There is some local belief that it may have been a holy well, and a cross was once erected over the structure as there is today.

When I first visited the well in the 1990s it looked a little forlorn, the cross said to be affixed to the apex of the building had gone and apparently fallen into private hands (I subsequently discovered its current whereabouts and it is safe!) It is better of today.

The spring arises in a substantial stone well house. This is made of squared rubble with a dressed stone coping. It is like a small grotto-like covered niche with an opening to the front with convex curved walls each side. Above the arched doorway an inscription reads.  The spring fills a small pool at base of niche within in the rockface showing this is a spring not a well. The cross has been restored as well.

In conclusion it would suggest that the spring’s development was an attempt by a Victorian clergymen to both gentrify the site and as thus built a proper well house with its legend. Was there a High Church tradition in the village in the 1800s not that I have so far discovered?

← An abedecary of sacred springs: Kazakhstan holy and hot springs
In the shadow of the train: St Helen’s Spring, Santon Downham, Norfolk →