“The stone head from the mouth of which the main spring flows, pictured in Mrs Leather’s the Folklore of Herefordshire has miraculously survived the tanking of this well for a water supply, although he is now buried almost up to his nose in concrete.”

Such was the description that when I was touring the area visiting holy and healing wells in Herefordshire I gave St Peter’s Wells a miss thinking I’d be disappointed. However, the well was a notable one John Littlebury in his 1876, Directory and Gazetteer of Herefordshire notes that:

“The water of these wells was formerly extensively used for the cure of rheumatism and sore eyes.”

Indeed these appear to other springs, and this explains the name, St Peter’s Wells, Ella Leather in her Folklore of Herefordshire notes of these:

“There were formerly three springs here. Two near together, above the large well, were good for eye troubles; into these pins were thrown. They are now closed up.”

“The water of the larger well flowed through a sculptured head of St Peter into a shallow bathing place made for the use of sufferers from rheumatism. Mr J. Powell, of Peterchurch, told me in 1905, that he could remember this chilly remedy being actually used: it was in his boyhood. The ash tree which formerly stood near the well had been cut down, and still lay above it.” 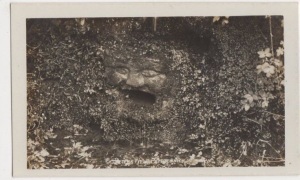 It is evident from Leather’s photo that the head no longer had a flow of water through it and it appears that the bath was no longer beneath it. I would suggest that the head had not flowed for some time because it is clean and lacking in any moss which would come with constant water. L. Richards in his 1935 Wells and Springs of Herefordshire notes that:

“A considerable quantity of water issues from sandstone in the neighbourhood of St. Peter’s Wells above Wellbrook Farm and gives rise to Well Brook—joined by a tributary from a good spring in Bradley’s Wood—which flows under the road at Crossway and so into the River Dore. The spring water is hard, especially that from the ‘ Limestone ‘ which is well displayed in a quarry below Urishay Castle and on analysis by C. C. Duncan, F.I.C., F.C.S., proved to be 96.37 per cent, carbonate of lime.”

This hard water may explain its use for rheumatics perhaps.

With such a prominent head it is not surprisingly that there has been conjecture over a pagan origin, citing the Celtics fascination with heads, especially in connection with wells It is interesting that an ash tree is mentioned Ash trees were thought be sacred in pagan times and where associated with the legend of Odin’s eye and the well, but of course it is a common tree and it could be a coincidence. Sant (1994) notes:

“An iron cross has been found in the wood above the well, and this may have come from the well where it would have lent a less pagan air to the place.”

A bath and baptism

Sant (1994) notes that the baths were provided with a:

“ shed for the rheumatic bather’s use.”

“up to quite recent times, baptisms were performed here, the bath being approached by eight stone steps. Mr Watkins explained that the steps and bath into which they lead was choked to the top with earth and the head was covered with water until recently, when excavations were made and the well renovated.”

Adopted for a water supply

“Village Supply.—This belongs to the ‘ Peterchurch Water Supply Company ‘—a company constituted by an Indenture dated 2nd February, 1921,and consisting of the users of the scheme. There are two separate undertakings: a spring from sandstone collected at outburst into a brick tank above Wellbrook (by the side of the road to Stockley Hill where it is joined by the lane from St Peter’s Wells supplies the lower part of the village….”

The current reservoir was installed here in the 1960s, and its insensitive positioning rendered the ancient stone head redundant as noted by Sant 1994 and shown below.

However in 2015, as part of an infrastructure upgrade, a way was found to direct excess water through the stone head and water once again flowed through its mouth. In periods of very low groundwater levels the flow from the stone head may be reduced to a trickle due to demands from the water supply network.

When I did finally visit the site in 2017 I was delighted indeed to see this head restored to its usage and the well chamber visible, albeit difficult to approach as a result of the fence which understandable is around the site to protect the water supply. It now boasts to be the most notable holy well in the county once again.