Perhaps Hertfordshire’s most famed well, dedicated to the first British Christian Martyr, and thus called St. Alban’s Well or Holy Well (TL 149 068) and as such one could argue it is the earliest Christian holy well in Britain.

Who was St. Alban?

Gildas and Bede accredit his martyrdom to the ruler Diocletian (c305), later authorities attribute Septimus severnus (c209) or Decieus (c254) to the act. His conversion to Christianity occurred when he sheltered a wanted priest (later St. Amphibalus). The priest taught Alban and baptised him as a Christian. The two exchanged clothes and, allowing the priest to escape, Alban was captured instead. He was tried and sent to be executed. The journey to his execution, now locally commemorated each weekend close to St Alban’s Feast Day, is when the spring arose!

The legend of the spring

It is said that upon climbing the hill to his martyrdom became tired and thirsty. Falling to his knees he prayed to God to quench this thirst and miraculously a spring of fresh water appeared. This is however only one origin for the spring. The other story states that after being taken to the old city of Verulam, he refused to offer pagan sacrifice, and was executed. His severed head rolled down the hill and where it rested a spring burst forth. This is a common holy well motif. After the adoption of the Christian church in the third century the spring gained great notoriety (although it is of course plausible that the spring was a pre-Christian site, gaining greater pilgrimage with Christian doctrine). St. Alban was also adopted, and finally installed in a Shrine in the Abbey. This was restored after the Reformation and is a beautiful example of a Pre-Reformation Shrine.

A spring of Arthurian romance?

This spring was strangely absorbed into Arthurian romance. It has been associated with mythical Romano-Celt ruler Uther Pendragon, father of the also possibly mythical King Arthur. The spring is said to have healed his wounds, and the incident is recorded during the reign of Richard II, by Chronicler Brompton:

“….Uter Pendragon, a British Prince, had fought the Saxons in a great battle at this place, and received a dangerous wound: and lay a long time confined to his bed: and that he was cured at length by resorting to a well or spring not far distant from the city; at that time salubrious; and for that reason, and for the cures thereby performed, esteemed holy; and blessed in a peculiar manner with the flavour of Heaven ..”

The well through the ages

The Benedictine nuns of the nearby nunnery were according to Matthew Paris, said to have dipped their bread in the well, and hence earned it the name of Sopwell. Until the reformation the well rivalled Walsingham in its popularity among the sick and troubled. Even in the 19th century the ‘Holy-well’ was “still held in some estimation, for its purity and salubrious qualities.” It then lay on the lawns of the Duke of Marlborough’s Holywell House, which was latter demolished. 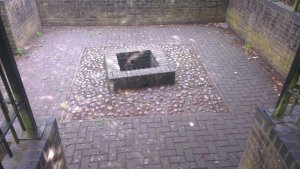 Until the 1980s, the site was marked by a stone on the playing fields of the local Grammar school. However, in the 1980s, the site was at risk from developers, as the school wished to sell off its fields. This precipitated local interest, and a campaign organised by a Mr. Tony Haines, and set out to rediscover the well and ensure that it was preserved. This they finally did, although the site was not officially recognised by the local council, despite it corresponding to ancient maps, local knowledge as well as remains of medieval brickwork. Fortunately, the developer was sympathetic and in a rare example of preservation, restored it. It now stands in a small walled garden. The well was repaired by brickwork, and fitted with a protective grille over it. Interestingly, a combination of wet weather coupled with the water authorities ceasing pumping from the Ver’s source, has meant that the water table has returned and water can be seen in the well. 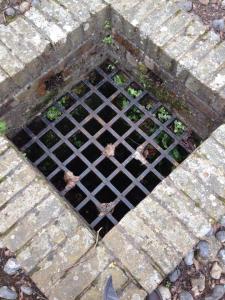 This restored site can be found by going up Holywell Hill Road, then taking the righthand road, Belmont Hill ( if approaching from Junction one M10 ). Take next right, into new housing estate, then left and the well is found in a small garden on the left.

The well survives, well as long as the housing estate does! It has become the centre of a local religious groups devutions as well!