The well depicted in Hope’s (1893) Legendary lore of holy wells, sadly he says nothing about it!

This was first recorded 1366 as ‘Halywalsiche. and then in purchase of the lands of St Catherine’s Chantry, lately dissolved, in 1564, it refers to lands here at ‘Holy well hedge’ and ‘Hollywell siche.’  However, nether of the dates help identify when the structure shown by Hope was actually built. Over the arch was carved inscription an inscription which read:

“this Holy well was built by Robert named Hardinge 16xx“.

Briggs suggested the date of 1660, which is quite likely, as it coincides with the Restoration of Charles II as the family at the nearby hall.  The aforementioned Hardinge, were staunch Royalists, and of course puritans disliked holy wells as many other so called ‘popish’ things. However, its restoration may have been for little more than to maintain a good water supply. Later depictions such as pre-war postcards show the date to be quite clearly 1662. 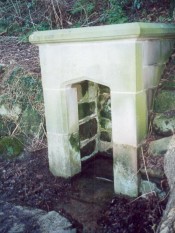 The restored holy well today, original stonework to rear with newer stone at the front

The present condition of the well is tribute to its local community.  The arch survived for nearly 300 years but a combination of vandals and the roots of the nearby ash tree caused the arch fall down and it lay in pieces in the 1950s. Sadly the original inscription appears to have been stolen or entirely broken to pieces. However, unlike many similar sites, this was not the final fate of the well. In the 1980s it was restored using as many of the old stones as possible. The landowner was happy to sell the land and Melbourne Civic Society donated money for its restoration. No artifacts were found, apart from 17th century Ticknall ware pottery, later tiles, and drainpipes fragments. Most of the original stones were recovered, but the job of reconstructing them appeared to be a large task and new stone was required. The arch over the well was left blank as it was thought misleading to re-inscribe it. H. Usher in there (1984) The Holy Well at King’s Newton, Derbyshire in the Old Series of holy wells journal Source notes that on the first Sunday after Ascension Day, May 19th 1985, over a hundred people gathered for the opening ceremony when the plaque was unveiled by the Society’s President, the Marquees of Lothian, of Melbourne Hall. It is delightful to see it restored and celebrated by the community.

There appears to be no records regarding its properties baring its ‘superior excellence of its waters‘, and being noted as a mineral spring. Interestingly, its waters are said to flow towards the rising sun.

Extracted from R.B.Parish’s (2011) Holy wells and healing springs of Derbyshire