Lincolnshire is not the first place on thinks of concerning holy and healing springs but as my research for my book on Holy wells and Healing springs of Lincolnshire showed closer examination can reveal some interesting sites and traditions. One such site now completely forgotten is found in the aptly named Welton. Here the Old Man’s Spring and five wells, which the spring head supplies, in the village were the source of a local little known and forgotten well dressing custom. A correspondent of Maureen Sutton in her excellent Lincolnshire Calendar (1996) a resident of Welton notes:

“The custom of well dressing was an annual event which took place on  Ascension day. Five wells in the village were dressed including one in the churchyard, one in the grounds of the vicarage, two in West Carr and one in spring cottage in Sudbeck Lane. The origin of the source being ‘old man’s head spring’ in Welton Cliffe (Westhall Farm) The dressing of the wells took a different format to that of neighbouring counties, Derbyshire and  Nottinghamshire. In Welton each area surrounding the well was marked with an arch formed from a tree branch and decorated with lilac and laburnum. A linen, white calico cloth on which was depicted a text taken from the bible was put into each arch; this was put up by the men in the village early on Ascension Day morning. The ceremony began with a service in Saint Mary’s Church followed by a parade to the decorated beck in the churchyard. Each well was then dressed in turn and a prayer said and a hymn sung. The local Sunday school children took part in the ceremony by placing wild flowers at each well. ”

Sutton (1996) records two references in the local parish magazine, one in 1910 which reads:

“On Ascension Day we again propose to continue the custom of ‘Well dressing’ as an act of thanks-giving to Almighty God for the blessing of bountiful supply of pure water to Welton. Celebration of Holy Communion 8 am; Well dressing service 2pm; Procession to the wells 3pm; Public and Day school Tea 4.30pm; Children’s concert and Prize distribution 6.30 pm We pray to God to favour us with fine weather for the festival”. 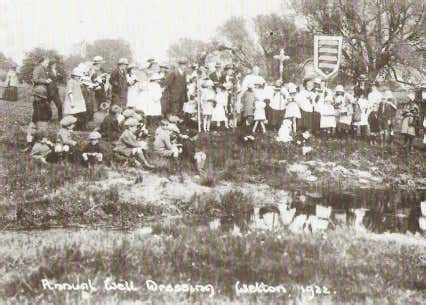 Sadly, the colourful and last survivor of a more widespread Lincolnshire tradition ended in 1924. One wonders why the spring head itself was not dressed until it reached the church yard; perhaps this was a conscious attempt to Christianise the site, does the Old Man have a pagan connotation? Alternatively, it may have been that the spring head was too inaccessible! There do not appear to be any direct traditions associated by this spring head. But I was told that during a whooping cough epidemic in the village in the 1900s, mothers took their prams containing the infants and stood them in the beck, believing that the germs would be carried away, with the flow of the fresh water! Perhaps this suggests a healing tradition. The spring itself arises around a large concrete culvert and indeed appears to bubble up more around it through some stones to the side than this channel. The spring quickly forms a pool and flows downwards towards