← Rediscovered/Restored: Guest blog post: A Saint’s Grave and Well in South Wales by Janet Bord
A Somerset field trip: The holy wells of Charlcombe and Lansdown →

The Ancient Water supplies of Canterbury

Canterbury appears to have been well supplied with springs, a factor which may have lead to its adoption as a settlement from prehistoric times. This, together with Canterbury’s considerable importance as a pilgrim goal through the middle ages, has also not surprisingly resulted in a number of noted culted and religious watering holes. Indeed St. Thomas’s Shrine was associated with a healing spring. At the height of the Canterbury pilgrims, St. Thomas’s Well would have been the most famous well in the county, if not the country. Every pilgrim would take its water, believed to be of a highly curative nature, and it became an important part of the pilgrimage. Despite this, it is surprisingly now little known and the well itself has been lost. Although authorities place it in the choir of the cathedral, a site to the left hand of the original shrine site in the crypt is identified. This being a circular stone set into the crypt floor.
Even before his martyrdom, Thomas had already attracted a considerable following, and this well, which he drank from daily, had already gained special notice. After his death, it became even more famed. Indeed, one of his first miracles is by some accounts associated with this water. It involved a man, who upon dipping his shirt in the saint’s blood and rinsed it into its water, he gave this to his wife who was cured of her paralysis.

Obviously the monks were quick to see an important source of revenue. At first pilgrims were supplied with a phial of water into which drops of the saint’s blood were added, but a later story stated that the monks swept the spilt blood into the well, and the water brimmed with miraculous healing water! A story probably supported by the presence of red iron or chalybeate waters as found at Tunbridge. This later story was doubtlessly concocted when the original source of blood ran out! A worn step in the south aisle of the Trinity Chapel is said to be where they knelt to receive the water. Gerveise records ( cited in Erasmus ( 1876 ) Pilgrimage to St. Mary of Walsingham and St. Thomas of Canterbury):

‘..it is not beside my purpose to relate the way in which the Blood of the new Martyr, mixed with water, is given to drink, and then carried away, to the pious who desire.’

Many miracles became associated with the water. One tells of a priest called William of London, who was struck dumb at the feast of the Protomartyr, St. Justian and in a dream was told that he should visit the shrine and be cured. This he did and indeed was. Such news helped to attract greater numbers. As Gerveise continues:

‘As soon as this was divulged to the people, many came to ask for the same: when the Holy Blood was bestowed upon the sick mixed with pure water, in order that it may last longer.’

Another recorded miracle is that of a certain London Shoemaker Gilbert, suffering with fistula, was cured by its water and after returning the sixty-six miles home to London, he stripped to the waist and challenged his neighbours to a race! It appears to have even been able to restore life to the dead, although how the dead drank is not explained! Despite the great cures the saint could also be vindictive to the unworthy, irreligious or insincere. Such people would often find their lead phials, of St. Thomas’s Water, mysteriously empty, even before leaving the Cathedral precincts. ( In truth they often leaked! )

Naturally, such miracles were treated as suspiciously during the dark days of the Reformation, and in 1538 Lord Cromwell, doubting their authority, had pilgrimages stopped. The Kings Commission destroyed Beckett’s Shrine, and the well was consequently lost. 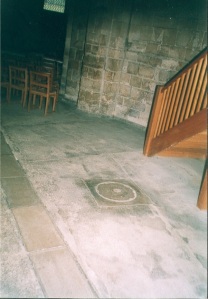 In the town there is another site associated with Beckett’s murder, called the Red Pump. This is said to be painted red as a memorial to the saint’s death. When this legend begun, and why it should be so connected is not clear. Yet, its connection with a Roman milestone suggests some antiquity for the site.

Records note a number of named springs which carry religious names, although few exist in any form or their history fully documented. One of these sites is a St. Edburga’s Well, noted by Urry as Eadburgawelle, and mentioned in a grant to St. Augustine’s Abbey in the Ninth century. Its site is now lost, and even its exact location unclear. Other sites mentioned are a St. Peter’s Well which is noted on a map drawn by Somner ( 1703 ) although he does not refer to the name in his text. There was also a Sunwin’s Well, which according to Urry was named after Sunwin the Smith and lay in the alley from the Cathedral to the Buttermarket. Other medieval wells were Hottewelle and Queningate Well. The former is interesting and suggests it may have been a thermal spring. This is particularly significant as I am unaware of any such sites in the county, and so the site may record such a rarity. ( Was it used by the Romans? ). Records show that a Gilbert the Priest lived close by to this site. The later. Queningate Well was, known also known as Fons de Cueningate, and may again have been known to Romans as it is associated with a Roman gateway.

A Roman origin is given for a fascinating lost site called St. Radegund’s Bath which is believed to have originated as a bath, and latterly to be associated with the cult of St. Radegund. Why it should be associated with this Sixth Century royal saint is unclear, although it is known that her cult was present in the area, as there is a monastic site near Dover bearing her dedication. It is first noted by Gosling ( 1777 ), when it was adapted to cold bath and thus it is worth recording the description in full:

‘St. Radegund’s Bath, a fine spring built over and fitted for cold bathing….in altering a very ancient dwelling house near the bath some hollows or pipes were discovered, carried along in the thickness of an old stone wall, which seemed a contrivance for heating the room in former times, and making a sudatly or sweating room of it.’

Records do show that the City Corporation bought this bath in 1793, and it was consequently leased to Messrs. Simmons and Royle for 28 years. This bath house was extensively repaired in 1794, and its basin was enlarged and divided in two. The baths were originally covered by arched roofs and lit from above by windows set into two turrets. Separate dressing and waiting rooms were also installed to facilitate the customs. Yet by 1825, sadly both the building and the bath became dilapidated, and hence only occasionally used. Sadly the popularity of the nearby Dolphin Inn which was situated above the bath-house, undoubtedly precipitated its destruction. By the 1930s the site was only remembered by the ruins of the Bath house cottages and as Gardiner ( 1940 ) Notes on an ancient house in Church Lane, Canterbury notes that the:

‘Healing waters in the adjacent well or bath of St. Radegund recently ( most deplorably ) filled in, in making a car park.’

Hence regrettably nothing remains of the site to record what appears to have been an historically fascinating site.
To the east of the city centre, are two sites which perhaps considering the proximity to the ancient church of St. Martin’s, are the oldest utilised in the area. St. Martin’s Spring is believed to be that which flowed out into a drain in North Holmes Road ( formerly Church Lane ) but ceased to flow in 1979, possibly the result of trenching near the site of the well. The flow from this, or rather its aquifer source, and that St. Augustine’s Spring were probably incorporated into St. Augustine’s Conduit House as noted by Hasted ( 1797 – 1801 ):

“..among the ruins of St. Augustine’s Monastery, other on St. Martin’s Hill for the dispensing of which are several public conduits in the principal streets of the city..”

This conduit is now enclosed in St. Martin’s Heights Housing Estate. Little archaeologically speaking was known of the site before its slabbed roof collapsed in the 1980s. Previously, it has been only marked by a slight earth mound with a concrete slab. Consequently, this collapse revealed much that was unknown of this structure and this prompted English Heritage to undertake a better study. The concrete slab was opened up to reveal a series of steps leading down into the structure, a ‘dark watery chamber which in recent times children had filled with a variety of domestic rubbish.’ The conduit was shown to be a six sided structure, the chamber within is divided into two sections with three Romanesque arches through which green sluggish water flows. Experts suggest that there was a floor above chamber and the structure was covered by a tiled conical roof. It is likely that this conduit is twelfth century. Around the conduit there is evidence of a large man made pond, which may have predated the conduit in function, but this is unsubstantiated. The structure has now been sensitively restored and can be visited. The water supply of the St. Martins is well covered in an article by Jenkins ( 1980 ) in Trouble Waters ( The Parish of St. Martin and St. Paul, Canterbury Friends of St. Martin ) which mentions the conduits constructed for supplying the city. 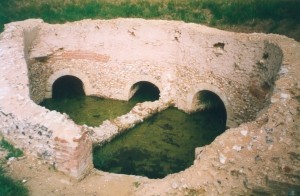 The springs feeding the conduit house are part of a complex of aquifers issuing from the step natural hillside across the eastern side of the city in the St. Martin and Old Park area, such as that at Horsefold. Such springs, as Hasted ( 1797-1801 ) mentions, also fed a conduit in Christ Church priory, and all across the city. The exact supply of the Christ Church Priory was probably that of the large reed pond in the grounds of Old Park, but no ecclesiastical, religious, or specific name is recorded. From this source, the Norman Christ Church community had a very sophisticated water system drawing their water from which was the foundation for further improvements. The most remarkable survival of this system is the conduit or water tower, a product of Prior Wilbert‘s scheme. This is equally remarkable as the plans still exist! They show that from the source the water travelled through two and a half inch diameter pipes ( such that would maintain a suitable pressure ) to feed the water tower and lavers ( fountains for the monks ). The full plans and discussion of the water system can be read in an article by Willis ( 1889 ) The Conventional Buildings of the Monastery of Christ church in Canterbury. The springs may indeed have originally been exploited by the Romans to supply baths such as that of St. Radegund.

Clearly Canterbury’s ancient water heritage is a fascinating one showing how its abundant supply has been utilised over the medieval centuries. For anyone interested in ancient water supplies it is an interesting city.

← Rediscovered/Restored: Guest blog post: A Saint’s Grave and Well in South Wales by Janet Bord
A Somerset field trip: The holy wells of Charlcombe and Lansdown →