← The healing springs of Hampstead
An abecedary of Sacred springs of the world: Portugal’s Fonte do Ídolo Braga →

“In Catholic times the devout clients of St. Edmund flocked to their crystal waters, as pilgrims journeyed to St. Winifred’s Well on the western side of the isle. Now, however, the holy wells of Hunstanton belong to the forgotten past. Farmers, indeed, for miles round send their water-carts to be filled at them, and one of the springs supplies the new town with its sparkling water ; but, though marvelous cures are said to be wrought at them, few recognise their miraculous power, and only now and then does a solitary pilgrim linger over the spot, and recall to memory the stranger prince who knelt there to pray for his country.”

James MacKinlay (1893) Saint Edmund King and Martyr: A History of His Life and Times with an Account of the Translation of His Incorrupt Body, Etc. From Original Mss 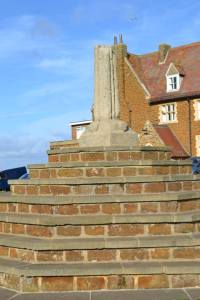 The ancient cross said to show pilgrims the way to the well but it didnt have a sign on it!

Who was St. Edmund

Despite being England’s first patron saint Edmund is only known only from two Saxon period sources: the Anglo Saxon Chronicle circa 877 – 899 and the minting of a commemoration coin from 890.The later suggests a figure of considerable importance but beyond of this, St Edmund’s life is full of miracles and a well-known martyrdom were written long after his death.

As a King of East Anglia he was perhaps less well-known to his people as Redwald, buried in Sutton Hoo in the mid 600s, by the late 800s, the King had been overtaken in importance by Mercia and Northumbria, but his standing up to and final death at the hands of the Vikings were an important part of the cultural mythos of the Saxon resistance perhaps. Not unsurprisingly for an early Kingly Saxon saint he has sacred springs associated with him.

The legend of St Edmund’s return

The first of the noted springs arose at Hunstanton a town proud of its St Edmund association. It is here that legend tells he arrived from Nuremberg, to claim the throne being nominated as the successor of Offa, as noted Allen Mawer, (1911). In his Edmund King of East Anglia is possibly apocryphal  This note withstanding John Lydgate in his Life of Sts. Edmund and Fremund, 1434 (translated by Horstmann (1881) says that on a safe arrival on dry land of East Anglia:

Geoffrey of Fountains Abbey too states in the The Youth of St Edmund how when Edmund and his companions returned to East Anglia from exile, they landed about a bowshot from the promontory of Maydenebure near Hunstanton. Here the prince knelt and prayed for his country at a spot afterwards distinguished for its fertility:

“and at the very place where he rose up from prayer, and mounted his horse, twelve sparkling springs broke out from the ground. They still run today, a wonder to all who see them, and then join together to trickle with a pleasant chuckling murmur into the salt sea. Many sufferers from disease have washed themselves with these waters and recovered their health. When the water is taken for the benefit of people living further away, if they are ill or for any other reason, it retains its healing power. And it so happened that, when St Edmund had won his crown, he liked this place best of all for its memories, and had a royal palace built on the rising ground near these springs”.

Geoffrey had lived at Thetford, compared to other historians not that far from Hunstanton, so he may well have learnt this story from tradition rather than from books.

The remains of the chapel tastefully restored but no spring there!

Will the correct number of springs reveal themselves?

White (1845) in his directory of Norfolk records that:

The number of springs varies according MacKinlay (1893) Saint Edmund King and Martyr: A History of His Life and Times with an Account of the Translation of His Incorrupt Body, Etc. From Original Mss who reports that the Gaufridus says twelve springs; Lydgate says five; Capgrave only states that “a fountain sprang up, curing many infirmities”.

The name the Seven Springs appears to have been a later name and of course seven springs are not uncommon across the British isles and have a cult significance. James MacKinlay (1893) states that Gaufridus:

“These springs, to this our own day excite the admiration of the beholder, flowing as they do with a continuous sweet and cheering murmur to the sea. Many sick wash in these fountains and are restored to their former health, and pilgrims carry the healing water to remote parts for the infirm and others to drink.”

Will the location of the springs please reveal themselves?

The site of these springs is debatable. The obvious location is the chapel near the lighthouse but if they were there there is no sign or perhaps they have now fallen into the sea. One possibly location is by the Old Church. This is a very plausible location and indeed there is a large duckpond in the location, another is a boggy woodland called the pools which may also be the source. 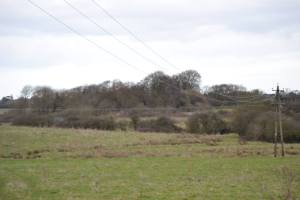 However, the most likely is that by the old Waterworks. Here the springs are still present in the garden of what is now a private dwelling in Old Hunstanton. The spring’s water was pumped to the water tower (now demolished) at Lincoln Street and was the town’s principle source.

The springs fill a considerable pool which flow out as a stream although a recent fence makes it nigh impossible to view them. This would fit with MacKinlay (1893) who notes that:

“St. Edmund’s springs are situate about a quarter of a mile from the ancient and beautiful church of St. Mary in Old Hunstanton.”

It would be nice to have some signage to this, perhaps historically (if he did indeed land here) the most important of Hunstanton’s relics after the chapel.

← The healing springs of Hampstead
An abecedary of Sacred springs of the world: Portugal’s Fonte do Ídolo Braga →