An abecedary of Sacred springs of the world: Ain Hleetan well Qatar

This month we have the letter q which restricts us to one country! Fortunately, Qater does have some historical water supplies. However details are limited and so this month is a rather shorter blog post so apologies.

In the dry terrain of Qatar water was understandably an essential resource. However, like many places modern water systems have meant that the 107 ancient wells of the country have slowly been lost and forgotten. One of the most significant is Ain Hleetan Well. 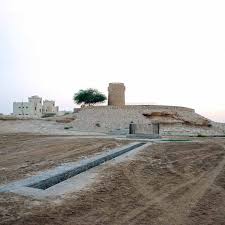 Found on the west coast of Al Khor, Ain Hleetan Well was the principle source of the Al Mahanda or Al Muhannadi tribe of the city of Al Khor settled in the 18th century. A local legend states that a group of hunters were hunting a hare and found the spring, which sounds like a classic folklore motif but details are lacking. More realistically, a new water supply was needed as the city expanded. Al Khor towers were built in 1900 to defend this well.

The water arises in a circular well head and then fills a cylindrical basin. Locally people called it the ‘Doctor’ as its water were believed to be curative according to old oral sources. Details of which are difficult to find though.