← Springing from the fight between Paganism and Christianity – St Decumen’s Well, Watchet, Somerset
The ancient and holy wells of Winchelsea, Sussex →

An abecedary of Sacred springs of the world: Some holy wells of Russia

Russia boasts hundreds of holy wells or Святой колодец however their history is a troubled one and many suffered from the atheist Soviet regime – pilgrimages were banned, chapels closed and holy wells filled in and destroyed. However, since the fall of the USSR Russia is reviving and restoring these ancient water sources and in this post I thought it would be of interest to followers.

One such example is the Polovinka holy well in the Venerovsky district. The site was associated with the finding of a miraculous icon of the holy martyr Paraskeva Friday, a hermit who named herself after the Lord’s passion day and was persecuted by emperor Diocletian in Roman Iconium in Asia Minor. This was found on the shore of a lake and the transferred to the church in Voznesenka but when the next day the people went to see the icon it was not there but back at the lake. This happened several times. Seen as a sign, the local people dug a well on its bank and over it a chapel and placed the icon within it. The water was blessed and taken by the pilgrims. Large number of pilgrims came and a convent was even established there.

The loss of the site

Then came the Soviets who in 1979 burnt down the church and destroyed the holy well chapel, dismantling the foundation and burying the well. Despite this the memory had not been erased. Priests came with their people in secret to the site where the spring despite the burial still flowed. Over time people became bolder with their visits and then in 1995, three years after the collapse of USSR, remains were found and a restoration of the well was planned. Soon followers with their priests from Tatarsk, Chanov, Chistoozerny and Vengerovo visited. And recently a roof with a dome and cross were placed back over the well.

Hieromonk Dimitry in the Novosibirsk Diocesan Herald (2006, No. 1) describes the pilgrimage of remembrance of Paraskeva Friday, the 9th Friday of Easter:

“Usually visiting pilgrims meet in the morning in the village of Voznesenka. Here at the site of the burnt church a prayer service is served. Then local residents join the pilgrims, after which everyone gets on the buses and goes to Polovinka. Before one kilometer, people go out and with a procession of the cross, with icons and banners, move to the holy well. To meet them come those who came here earlier.  A prayer service with water consecration is served at the well and the akathist to the holy martyr Paraskeva is read. Sanctified well water is bottled to all present. Then – a common meal in nature, and in good weather – and pouring fresh, icy water, which relieves fatigue and gives new strength. Everyone’s mood on this day is festive.”

A similar site is that of the White Well. This too is linked to a miracle working Icon, this time of Nikola Zaraysky. It is said that in 1225 the spring arose when the icon was rested on the ground on its journey from Korsun to Prince Fydor Yurievich being carried by Eustathius a priest. Then in the following centuries the seven centuries, the inhabitants of Zaraysk celebrate the day of St. Nicholas as a religious Orthodox holiday and after visiting the icon in the Cathedral a procession would form of those visiting the spring head. Its waters were said to be good for those suffering mental and physical suffering.  This custom like above died out in the days of the USSR. Then in 2002 a new wooden chapel, called Nikolskaya, was built above the spring with stairs down to the springhead. A special spring filled plunge bath was constructed Now every year on August 11, processions have returned with people from all over Russia coming for its waters.

The restorations of Russia’s sacred wells continues and new holy wells constructed. In Birobidgan, a new holy well has been built in association with St. Innocent Convent on its 220th anniversary a well will be built and opened.

A report states that:

“The territory of the monastery was chosen for the first source of holy water in the Birobidzhan diocese because the water in the territory of the village of Razdolnya is very qualitative in terms of physico-chemical indicators,” said Bishop Efrem of Birobidzhan and Kuldur. – It is located close to the surface of the earth – the wells of local residents are usually four to five meters deep.”

“The rite of consecration “treasure” was held in front of the relics of St. Innocent, which on this occasion were brought from the Annunciation Cathedral, where they are stored permanently. Prayer was held by Vladyka Ephraim, who asked the Lord to give the water “sweet and tasty, satisfied to the needy, and harmless to the reception.” 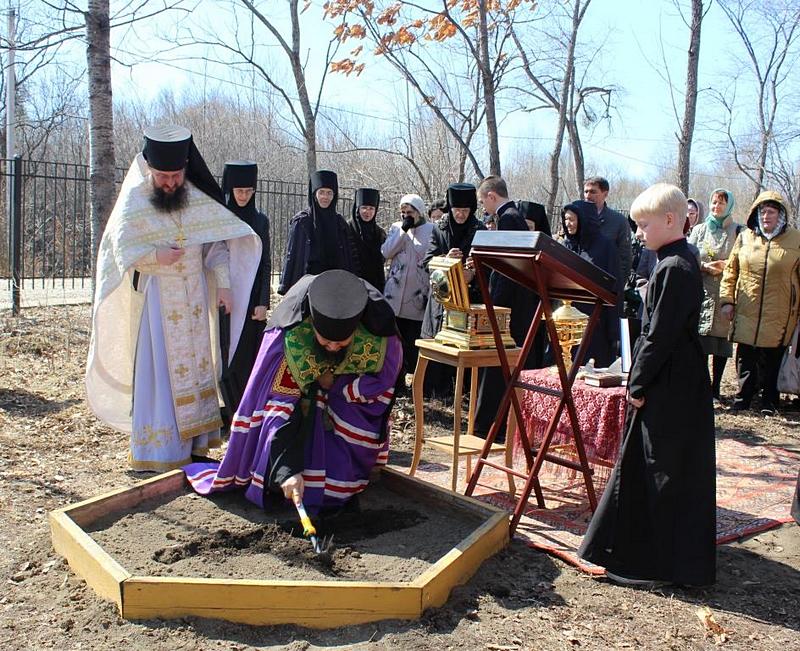 This new wall will have concrete walls and an hexagonal wooden frame over it with a dome.

Russia restoring and creating holy wells in equal measure. A superb place for the religious tourist

← Springing from the fight between Paganism and Christianity – St Decumen’s Well, Watchet, Somerset
The ancient and holy wells of Winchelsea, Sussex →