← An abecedary of Sacred springs of the world: Some holy wells of Russia
The lost well of St Faith’s Hexton, Hertfordshire →

The ancient and holy wells of Winchelsea, Sussex

The ancient small Sussex town of Winchelsea possibly has more named well and springs than a town twice as large. Sadly most of the wells have been lost, some no more than boggy holes but at least one is still preserved and celebrated.

A map see here shows the extent of the springs available in the medieval period. Extant details are unclear but they were important as boundaries as the following recalls:

“bounds of the Liberty of Winchelsea as they were taken and enrolled the 7th day of May in the fourth year of the reign of Edward the Third AD 1330 were as under First go from the Cross without Newgate north along by the Town Ditch and so through the midst of Lewes Marsh to a ditch of the Manor of Icklesham leading to St Leonard’s Fleet till you come right against a well in Pook Lane called Vale Well and so east up by a little lane lying between Crooked Acre and Bell Morrice to the King’s High street and then north east through the lands of Thomas Alard to the street end and so to the ring of Stone Mill and so downe to Pipewell Cawsey’s end and so by the street at the right hand leading to the north and to Grind pepper Well 3 and then as the old Ferryway leadeth to the Channell and so over the Channell to a fleet called White Fleet and as the water leadith by the Hopad Marsh into Kettle Fleet and so taking in the whole roads of the Puddle and the Cambre along upon the Sea Coast where the Hermitage did stand until a man can see Beachy Head neare Bourne and from thence through the sea to a wall called Court Wall and so west to the Cross without Newgate aforesaid.”

An account of the wells are described in William Durrant Cooper’s 1850 History of Winchelsea:

“Water, so scarce at Rye, was amply supplied to this town from six open wells:——viz., PIPE WELL, situate near the Ferry, close by the entrance of the town by the former Rye road: ST. KATHERINE’s WELL, situate half way up the hill leading from Rye, and below Cook’s Green, the water of which is slightly chalybeate: the STRAND WELL, on the hanging of the hill (above the former tan yard) destroyed a few years since by the falling in of the cliff: the FRIAR’S WELL, now enclosed, situated in a ﬁeld recently called the Peartree or Wellﬁeld, to the east of the Gray Friars ; the NEW WELL on the outside of New Gate; and the VALE WELL, now called ST. LEONARD’S WELL, at the north-west of the town, under the old castle,—of whose waters the popular belief yet remains, that when once drunken the drinker never leaves Winchelsea, that is, that wherever he roams his heart is still there; each drinker realising Goldsmith’s lines,

In all my wand’rings round this world of care,
I still had hopes, my strong vexations past,
Here to return—and die at home at last.”

Of these wells the aforementioned Strand Well was lost when the cliff collapsed in 1840s. The Pipe well which gives its name to one of the medieval gates in the town appears also to have vanished but it may remain lost in undergrowth on the steep cliff face.

The most interesting is the Vale Well which was surrounded by land by Poklande, from O.E pwca for ‘goblin’ and by the time of the above survey Pook Lane. Often springs were associated with such elementals and as such may be remembrances of pre-Christian deities. Found at the north end of town, under the old castle, in the meadows underneath the north-western hillside just beyond the mound of the windmill is St Leonard’s Well just about hanging on.  According to Walcott (1857):

‘of St Leonard’s Well at Winchelsea the good folks say that he who drinks will never rest till he returns to slake his thirst in its waters’.

“In the face of the cliff that Winchelsea turns to Rye there is a spring forming a dip – St. Leonard’s Well or the Wishing Well. The saying is that once you have drunk of those dark waters you will never rest til you drink again. I have seen – indeed I have introduced them to it – Henry James, Stephen Crane and W. H. Hudson drink there from the hollows of their hands. So did Conrad. They are all dead now.”

There was  a church of Iham just outside Winchelsea, dedicated to St Leonard; it fell into decay after 1484 and it is possible that the spring takes its name from the church rather than the saint directly. It was described in 1950s as:

It is now an indistinct boggy hole a few stones lie around and depending on the weather some flowing water.

Similarly, the Friar’s Well was once enclosed, being in a field called Peartree or Wellfield, to east of Greyfriars. It is a spring head of clear water arising from a small hole, surrounded by remains of metal sheeting and deposits of beach stones, suggesting a possible structure.

The oldest recorded well was Grindpepper Well or the Black Friar’s Well. This maybe the same as St. Katherine’s Well as marked on the map Currently, it is called Queen Elizabeth’s Well and it is the best known and best preserved, being found on Spring steps..  It is located on the hillside, a dry well enclosed in red brick arch with grating at front. Peering inside one can see about of foot of water.  Its alternative name is presumably pre-Reformation dedication but why is it named after this saint? The church is St Thomas the Martyr. Perhaps it was originally to St Katherine. 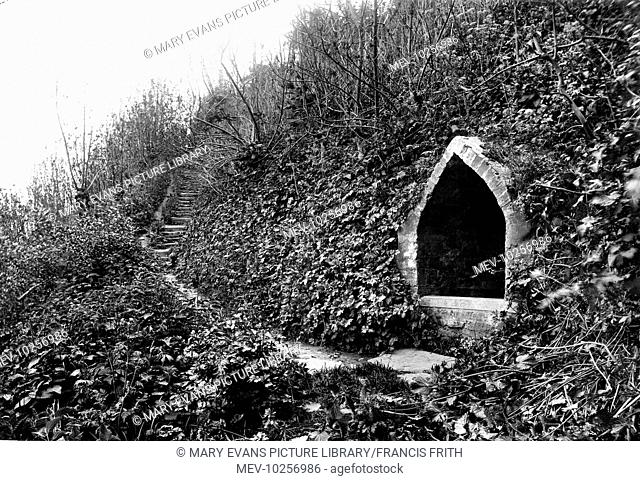 Interestingly, the name survived into the 1760s as it is noted on a map of Winchelsea by Charles Stephens. Records show that it was taken by the Corporation and it allowed its waters to be piped to a Mr. Joseph David in 1877. However, where did the Royal dedication come from? have mentioned in my account of Queen Elizabeth’s Well in Rye that such springs were developed as part of a cult. But it only appears for the first time in 1900 when the St Leonard’s and Hastings Natural History society visited the town and visited the well, then it appears immortalised on a postcard and hence named ever since. The best of the town’s ancient waters and perhaps now the most mysterious!

← An abecedary of Sacred springs of the world: Some holy wells of Russia
The lost well of St Faith’s Hexton, Hertfordshire →