An abecedary of Sacred springs of the world: Spring of Giving Life of Istanbul, Turkey

you reward me by letting gush forth, beyond reason,

the ever-flowing waters of your grace from your perpetual Spring.

I entreat you, who bore the Logos, in a manner beyond comprehension,

to refresh me in your grace that I may cry out,

The ancient city of Istanbul is a melting pot of religions and cultures. As a result it is an excellent place to search for holy wells. The most famous is the Life Giving spring or font or Hagiasma which survives despite a history of destruction revealed to a Byzantine soldier called Leo Marcellus who became the Emperor Leo 1 who reigned between AD 457-474. 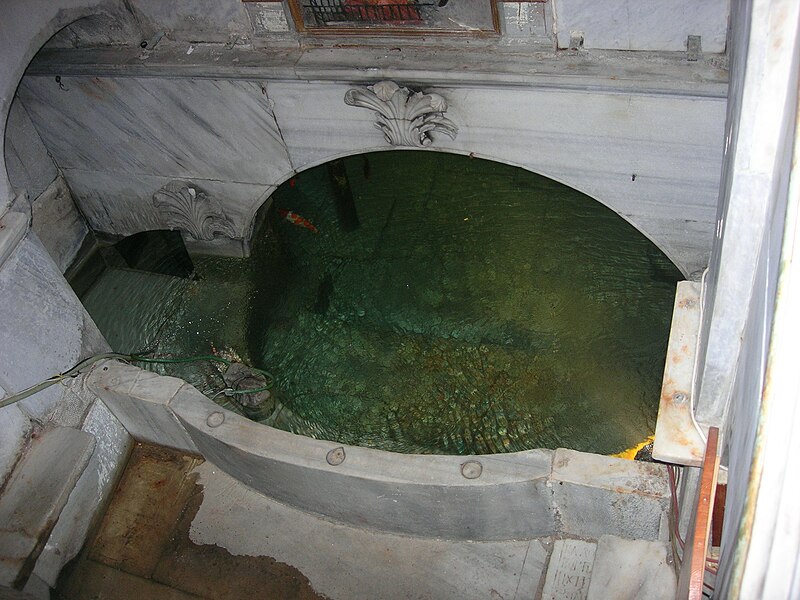 The legend according to Nikephoros Kallistos Xanthopoulos a Greek Historian writing in 1320 occurred on April 4th 450. At the time outside the Porta Aurea of the city of Constantinople there was an overgrown grove of trees where a shrine with a polluted spring existed. It is described that as Leo was passing a grove of trees, he passed a blind man who was lost. Leo helped him find the path and seated him in the shade. The blind man was thirsty and so Leo looked for some water. In his search, Leo heard a voice say

“Do not trouble yourself, Leo, to look for water elsewhere, it is right here!”

However,he looked around and could see any. Then he heard the voice again

““Leo, Emperor, go into the grove, take the water which you will find and give it to the thirsty man. Then take the mud and put it on the blind man’s eyes. And build a temple here … that all who come here will find answers to their petitions.”

Rather surprised by the voice he did as told and once mud was placed on the blind man’s eyes and he miraculously regained his site. Finally when Leo became Emperor he built a church on the site of the spring.

After his accession to the throne, the Emperor erected a church to Theotokos or St Mary. The spring continued to provide healing waters and in particular was said to allow people to be brought back from the dead hence its name. Indeed, the name Life giving font’ became an epithet for St Mary It became a major pilgrimage site in the Greek Orthodox church who celebrate the spring on Bright Friday in the Orthodox church. .

The present church is also rectangular and the spring arises in a crypt outside the church adorned with icons and paintings surmounted by a dome painted with an image of Christ in a starry sky. It is accessed a stairway parallel to the longer side of the church. The springs water flows into a marble basin. Inside the basin can be seen fishes who have been present in the water for several centuries. This is remembered in the complex’s Turkish name balikli the “place where there are fishes.

How did the fish end up in the holy well? It is said that a monk was frying fishes in a pan nea the shrine when a fellow monk told him of the conquest of the city by the Ottomans. He did not believe the other monk saying he would only believe it if the fish he were frying came back to life. At that point they did, jumped from the pan and into the water and began swimming! 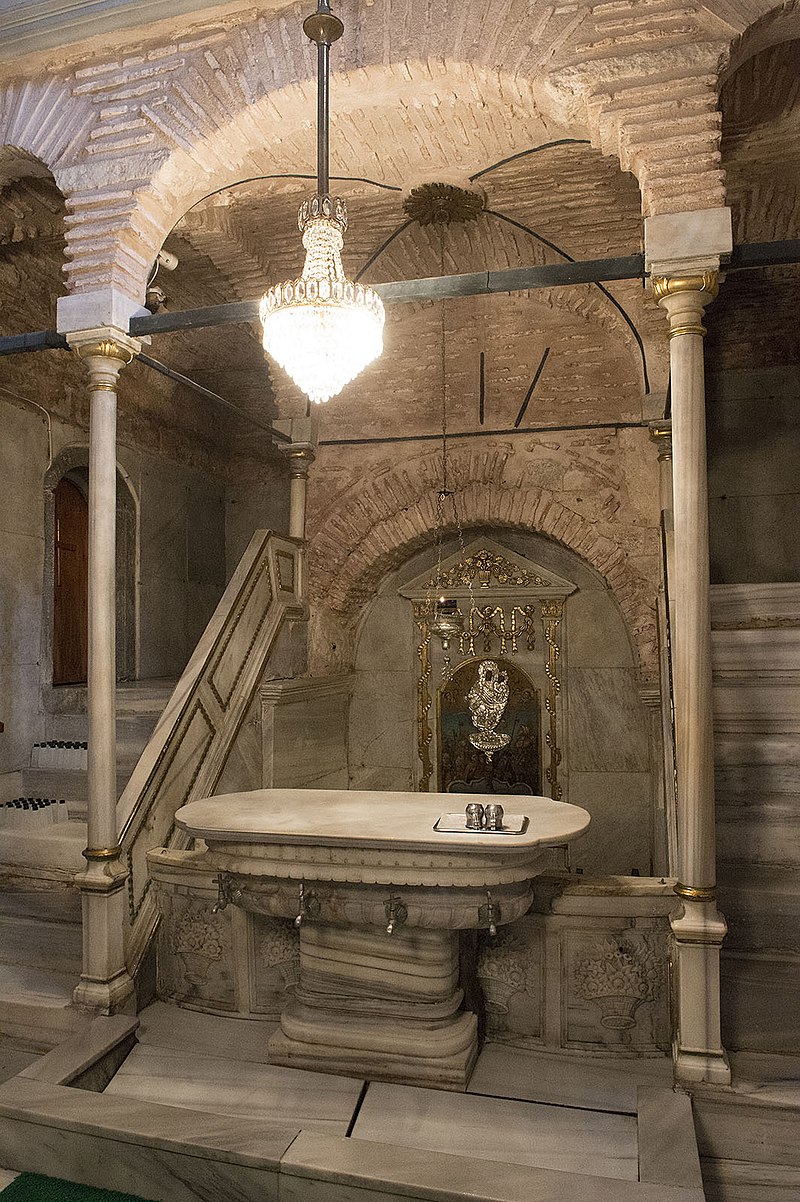 Joseph the Hymnographer in the 9th century wrote a hymn to St Mary called Zoodochos Pege:

As a life-giving fount, thou didst conceive the Dew that is transcendent in essence,

O Virgin Maid, and thou hast welled forth for our sakes the nectar of joy eternal,

unto everlasting life in unending and mighty streams;

wherein, taking delight, we all cry out:

Rejoice, O thou Spring of life for all men.