← An abecedary of Sacred springs of the world: Some Swedish sacred Skalla
In search of the healing and ancient wells and springs of Folkestone part one – The holy well →

The sacred landscape of Ilam Staffordshire – the Holy Well of St Bertram, his shrine and cave

Just a small distance from the highly visited Dovedale is a sacred landscape of hermitage, holy well and shrine. Ilam boasts a rarity in England a largely intact shrine with its foramina (holes in which the pilgrim could insert ailing limbs and get closer to the holy person). The shrine is that of Beorhthelm or Bertelin, Bettelin or more commonly Bertram. The patron saint of the county town of Staffordshire, Stafford.

Bertram is an interesting local saint, dating from around the 7th-8th century in what was the Mercia. Briefly, he is said to be of Royal Irish lineage but after making a princess pregnant, escaped to England where he sheltered in the woods around Ilam.  The story is told by Alexander, a monk, in the 13th century who notes:

“They were in hiding in a dense forest when lo ! the time of her childbirth came upon them suddenly ; born of pain and river of sorrow!  A pitiful child bed indeed!  While Bertellinus went out to get the necessary help of a midwife the woman and her child breathed their last amid the fangs of wolves. Bertellinus on his return imagined that this calamity had befallen because of his own sin, and spent three days in mourning rites”.

As a result he became a hermit living in a cave in the valley near Ilam.  Despite the earliest mention being Plot, the local geography is suggestive that this is the site of an early Christian hermitage site, although no mention of a well is noted in his legends it can be noted. The cave itself still exists but reaching it appears to be problematic. Only being accessible when the river Manifold dries which suggests a very useful hermitage site. However, it is worth noting that some accounts have the cave being Thor’s cave further up. Perhaps this is significant as it suggests a Christianisation of a pagan site.

One well up on the hillside has perhaps the greatest provena is surrounded on four sides by varying low stone walling, about two feet or so at its highest (although it appears to have been built up and down over the time I have visited the well).  The spring flows from a small, less than a foot square chamber, enclosed in stone and set into the bank through a channel in the rubble flow and out along the path towards it. 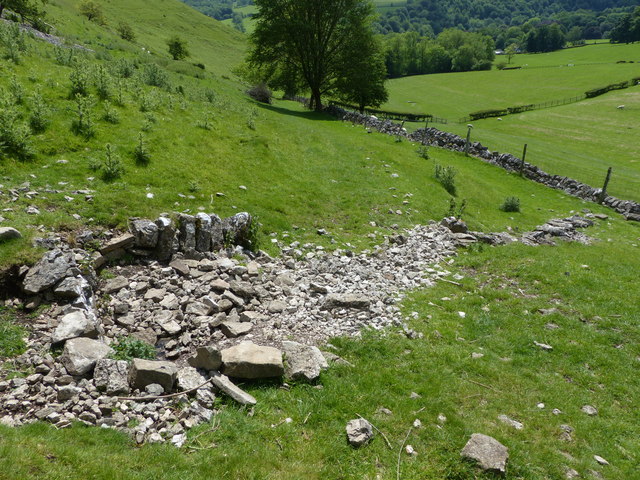 Since the 1990s, on the first Saturday in August, the Orthodox Church makes a pilgrimage to the site and blesses the well.

Interestingly, literature available from the National Trust shop fails to mention this well, but notes a more substantial second St Bertram’s Well. This is close by the church and surrounded by a rectangular stone wall with steps down, the water arises here at greater speed and flows into the nearby River Manifold. Visually it is more impressive and more accessible but whether there is any long tradition of this second well is unclear, but authors such as the Thompsons’s (2004) The Water of Life: Springs and Wells of Mainland Britain and Bord (2008) Holy Wells of Britain appear to have fostered its reputation.

Little is recorded of the wells, but Browne (1888) in his An Account of the Three Ancient Cross Shafts, the Font, and St Bertram’s Shrine, at Ilam, noted that the ash had gone, but the water was still being used.  He states that:

“The late Mrs Watts Russell always had her drinking water from it.”

Since the 1990s, on the first Saturday in August, the Orthodox Church makes a pilgrimage to the site and blesses the well.  Interestingly, literature available from the

More is recorded is rather curious. Plot (1686) in his The Natural History of Stafford-Shire, the earliest reference of this fascinating site and he records that a

“St Bertram’s Ash… grows over a spring which bears the name of the same Saint… The common people superstitiously believe, that tis very dangerous to break a bough from it: so great a care has St Bertram of his Ash to this very day.  And yet they have not so much as a Legend amongst them, either of this Saint’s miracles, or what he was; onely that he was Founder of their Church”

Such ash trees are commonly associated with holy wells. It is worth noting that in North myth, the sacred Yggdrasil was an ash tree associated with divination and knowledge. In some places rags would be tied to such trees but no such record exists here. By the late 1800s as noted in A general collection of voyages and travels digested by a J. Pinkerton in 1808 that the:

“Ash tree growing over it which the country people used hold in great veneration and think it dangerous to break a bough from or his in the church which are mentioned by Plot I did not hear of it at the village.”

Thus suggesting by that time it had gone by this time

A final observation is that in the 1800s a Roman relic found there:

“In the parish of Ilam near the spring called St Bertram’s there was found an instrument of brass somewhat resembling only larger a lath hammer at the edge end but not so the other This Dr Plot has described in the XXIII Tab 6 This he takes to have been the head of a Roman Securis which the Papoe slew their sacrifices.”

Does this suggest that sacrifices were made at the spring by the Romans?

← An abecedary of Sacred springs of the world: Some Swedish sacred Skalla
In search of the healing and ancient wells and springs of Folkestone part one – The holy well →