← Carshalton hidden holy wells part three – the grotto springs and Bagnio
An abecedary of Sacred springs of the world: The rag wells of Wales →

Christian reader view in me,
An emblem of true charity,
Who freely what I have bestow,
Though neither heard nor seen to flow,
And I have full return from heaven,
For every cup of water given.

Cuthbert Bridgewater on a plaque above the spring

Overlooked by Liverpool’s august Anglican Cathedral rising amongst the dead of its rock cut cemetery, the spring arising there could easily be confused as a holy well. But of course, the Cathedral is Victorian in date and the spring was only discovered when the quarry was being made!. This was 1773 and a local surgeon, James Worthington was quick to identify its possible benefits. In his paper about the site he said the water was good for

“loss of appetite, nervous disorders, Lowness of spirit, headache is proceeding from crudities of the stomach, Ricketts and weak eyes.” 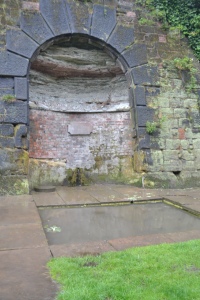 Similarly, a Dr. Houston identified the site as important and gave it the name ‘Liverpool Spa’ stating that the water was cool and refreshing to taste but ‘warmed the stomach and gave a cordial and inebriating sensation’ In an article called Virtues of the Liverpool Spa he records that:

“This water then contains, without a doubt, iron dissolved, both by fixed air, and by vitriolic acid: in this latter circumstance having the advantage over Tunbridge, and most of our other chalybeates. This renders it not liable, like them, to deposit its metallic principle by keeping. Yet the mineral vitriol is so very much diluted and so minutely divided, as to render it at once extremely beneficial, perfectly innocent and accepted even to weak stomachs. There is also a small proportion of muriatic and earthly salt, mentioned above, but not in such proportion as to claim any share in the medicinal effects.”

“It is particularly adapted to promote appetite and digestion, and to strengthen the tone of the stomach, impaired by excess or other causes. It gradually strengthens the whole habit, and hence is excellent in that weakness, which remains after acute diseases, and for those who, without any apparent cause, lose their strength, fall away, and are generally said to be going into weakness. It is useful in the first stage, or beginning of consumptions, and may be used with advantage, even in the more advanced stages, if the matter spit up be good pus and there be no considerable degree of fever.
It is of great service in nervous diseases, and in such as arise from weakness of the system, and reciprocally serve to increase it as in the beginning of a dropsy, in the Pluor albus or other feminal weaknesses, Diarrhoea and Diabetes. It is good to prevent the gout in the stomach and bowels, may be useful in rheumatisms, and in some bodies may remove the cause of barrenness or imbecility. In general it will be serviceable in a relaxed state of the solids arising from luxury, or excess or inaction, or a sedentary life, or consequent on iome d sease: it will correct a bad habit of body, and promote good suppuration and granulation in ulcers; and its frequent use will render a person less liable to be affected by cold, damp or putrid air, epidemical or other causes of diseases. It will provide an efficacious medicine in all the cases which were mention’d under the article of iron.”

“The best time for drinking this water is when the stomach is empty, in a morning, or an hour or two before dinner. It is proper to begin with half a pint, or a pint, and gradually to increase the dose, so as to take in some cases four or five pints a day, or even to use it for common drink at meals. The use of it should be continued for a pretty long time to reap the benefit of it, and where the quantity drank has been gradually increased, as soon as the end proposed is obtained, it shou’d be gradually decreased though not perhaps entirely left off. The summer season is best for drinking it, although the chief reason for this is that the fittest for exercise and bathing which greatly promote the good effects of the water, especially in nervous cases: this is also one motive for advising its being drank at the spring rather than at home. Moderate exercise, regularity, temperance, a light simple diet, not flatulent, using but little animal food, malt liquor, tea or coffee and relaxation of the mind also contribute much to assist its operation; as does, in obstructions, the warm bath.” 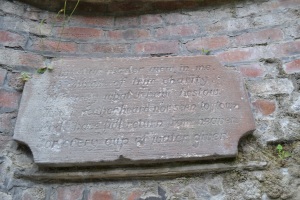 Another local surgeon, a Dr. James Worthington, also attempted to promote the spring in a pamphlet called Experiments on the Spa at Mount Zion, Near Liverpool in it he said it was good for:

However, the spring was largely ignored possibly due to its location in the cemetery and indeed within twenty years of its discovery it was overgrown by bushes. In the 1800s it was restored and surrounded by railings and filled a large pool. Despite the lack of interest for its medicinal water it did have a rather unusual effect on the graveyards its nearby occupants. In 1894, the copse of Captain David Gwin who died in 1813 was found to be completely petrified and turned to stone due to mineral water from the spring entering the grave. Today the spring flows continuously its water largely ignored by passersby but certainly still visited as shown by the presence of the leaf inserted into its flow.

← Carshalton hidden holy wells part three – the grotto springs and Bagnio
An abecedary of Sacred springs of the world: The rag wells of Wales →