In search of rag wells: The Ragged Springs of Healing, Lincolnshire

There are records of a considerable number of rag wells in Lincolnshire and as such a cluster can be identified. In a couple of posts we shall be exploring the sites focusing on some in detail such as the significantly named Ragged springs near Cleethorpes to the north of the county which is the focus on this blog post.

First it is worth considering the name. The springs themselves whilst possibly being an ancient site, noted by the fact that the earliest name for the parish is Heghelinge. One may make the assumption that perhaps this derives from the springs. However, this is at variance to the view of the Cameron (1985-2002) as it is noted that Hægelingas is derived from ‘the sons or followers of a man named Hægel’ rather than healing, although it is of course a strange coincidence perhaps.

The first reference appears to be Charles Edward Hope (1893) in his Legendary Lore of Holy Wells, which of course takes a number of sources, some hitherto unknown, but often from local accounts. He records it confusing under another nearby village and states?

“Lincolnshire GREAT COTES, ULCEBY. Here is a spring celebrated locally for its healing properties. It rises from the side of a bank in a plantation, and is overshadowed by an ancient thorn, on the branches of which hang innumerable rags, fastened there by those who have drunk of its waters.”

“Mr. Cordeaux visited them not long since for the purpose of discovering whether pins are ever dropped into them, but the bottom of the water in both cases was too muddy and full of leaves to allow accurate examination.”

According to Gutch and Peacock (1908) each well had a different use, one spring being a chalybeate one was done for eye problems, whereas the other was for skin problems. They continue to note that a:

“F S, a middle-aged man, who grew up in an adjoining parish, states that when he was a lad, one spring was used for bathing, and the second for drinking. The latter was considered good against consumption, among other forms of sickness. . . . What the special gift of the bathing well was F S cannot say. He often plunged his feet into it when a boy, but he does not venture to assert that it had any great power in reality, although ‘folks used to come for miles,’ and the gipsies, who called the place Ragged Spring or Ragged Well, frequently visited it. A Gentleman who hunts with the Yarborough pack every winter, says that he notices the rags fluttering on the shrubs and briars each season as he rides past. There is always a supply of these tatters, whether used superstitiously or not, and always has been since his father first knew the district some seventy years ago.”

The custom apparently continued until the 1940s, indeed a visitor in the 1920s noted that even the trunks were covered with longer pieces of rag. A picture in Healy (1995) shows a number of rags on the bushes as seen below. 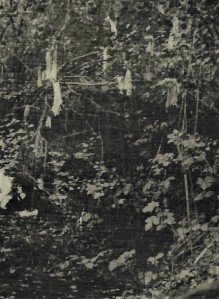 It is worth noting that perhaps the presence of a large thorn perhaps suggests a great antiquity to the site   The springs are still marked on the current OS map, as Healing Wells, in a small plantation, but they are, as the photo shows, only marked by circular indentations in the ground, the first spring being the easier to trace and appears to have holes, although these may be made by animals. 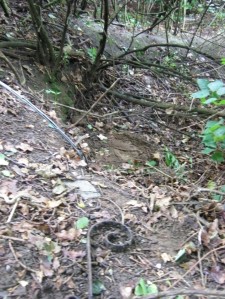 The springs are now quite dry, perhaps that the clogging of the springs noted above continued as the springs were forgotten, resulting in the current situation. Lying around the springs are a range of metal buckets in various stages of decay and some metal pieces which may be remains of a metal fence around it. I was unable to find any sign of rags although the man I asked in the whereabouts referred to them as the ragged springs. So there name maybe remembered even if the custom has long since been forgotten.