St Kenelm’s Well is not a tradition rag well location (although there is circumstantial evidence of the custom in Worcestershire) and the nature of the clooties left suggest a pagan association perhaps. Below is a photo archive of a visit in 2011.

Prayer flags at the well 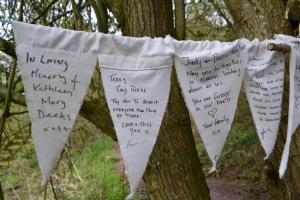 Ribbons, bells and fake flowers the most common cloottie 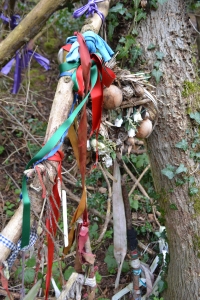 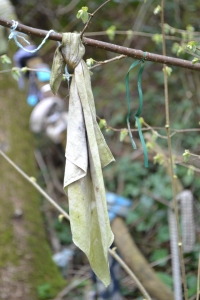 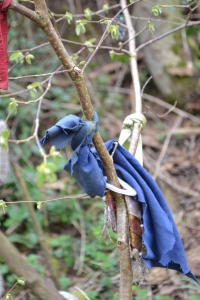 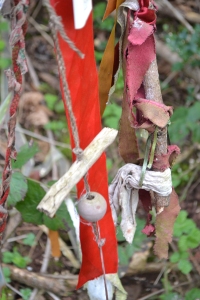 One a number of socks attached  to  branches 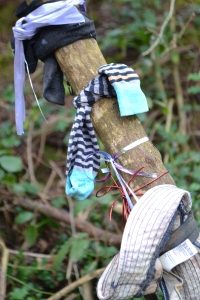 Motorcycle glove  perhaps  in  thanks  for a safe journey 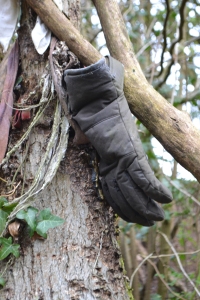 Found down a quiet lane, called Plemstall Lane near the church, is this well named after 9th century saint and Archbishop of Canterbury. The earliest record of the well is in 1302 but doubtlessly the settlement itself derived from Plemstow and supposedly where the saint lived a hermit life on a supposed island on which the church now stands, the spring arising at the base of its cliff. Plemstall taking its name from the saint. 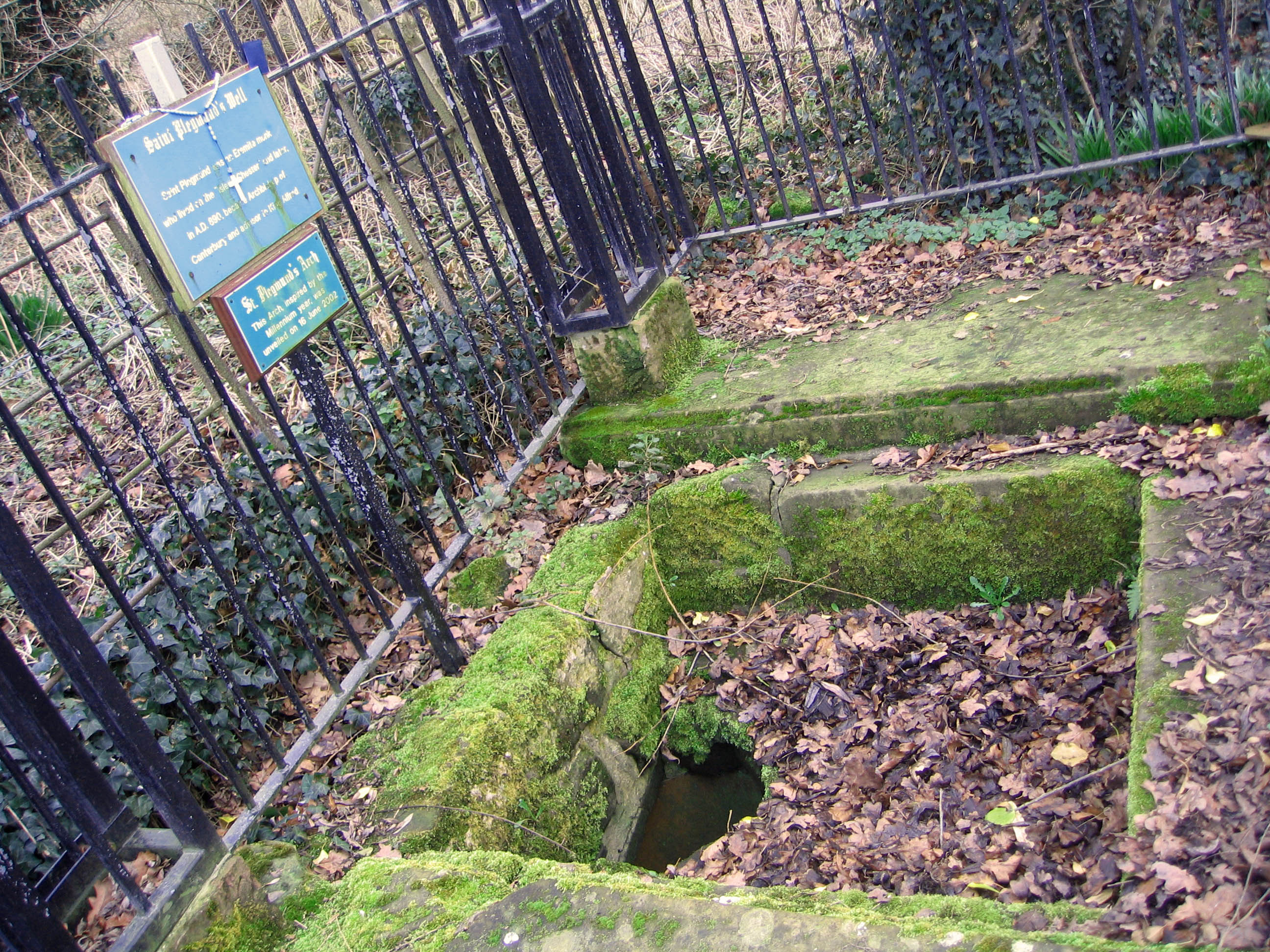 Rotha Mary Clay in her 1914 Hermit and anchorites of England states that Plegmund, an Eremite (lived) in the Isle of Chester’. He rose to a position of high office, being promoted Prinate of all England during King Alfred 871-899 AD being a learned individual noted for his writings and translations. He travelled to Rome to be consecrated the 19th Archbishop of Canterbury by Pope Formosus. Following the death of King Alfred, Plegmund crowned Alfred’s son, Edward the Elder. He continued to be Archbishop of Canterbury until his death in 923 AD and is buried in Canterbury Cathedral.  There is no evidence of his association with the well as sadly, the earliest reference to the well is a 1301 quit rent.

The present structure was erected by Mr Osborne Aldis in 1907 is curbed with stones with steps down to the water. The site was dedicated by the Venerable E. Barber, Archdeacon of Chester, on 11 November 1907. A Latin couplet was placed on the stone supposedly reading:

“Here, as in days when Alfred erst was King, Baptismal water flows from Plegmund’s spring.”

Keith Fitzpatrick-Matthews reported that in 1995 a survey of the well was carried out. This failed to find the slabs in added in 1907 but revealed that the well was a square stone-lined pit which had on either side two large slabs. The bottom of the well was a ceramic pipe inserted at a later date and there was water covering the first step as there was when I first visited. In 2002 a substantial wrought iron structure bearing the saint’s name and date was erected making the site easy to find. 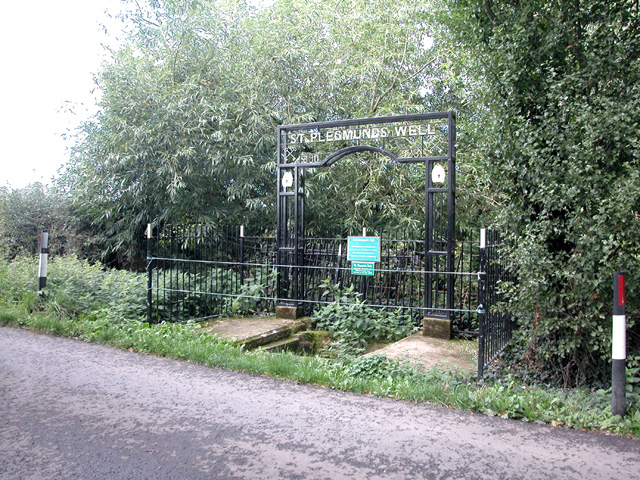 As noted by the signage, site was supposedly used for baptisms and was called the church well or Christening well, and is mentioned in Churchwardens’ accounts, although this may be another well. In the 1990s rags, or clootties, have been placed around the site, and attached to a hawthorn overhanging the tree. However, there does not appear to be any folklore or historical reference to this activity at this site and it has probably been transferred by those in the know! However, there is a tradition of hanging rags at Alderley Edge in the same county so it may be traditional. According to Richards (1947), that:

“on Sunday, August 14th, 1938, the Saint’s Day, a large body of Roman Catholics made a pilgrimage on foot to the well.”

This was probably started by the curate at St Werburgh’s Chester at the time, Canon Frank Murphy.   Canon Frank Murphy was clearly highly devoted to the saint, the church had stained glass windows of St Plegmund and the church hall opened by the Canon in 1971 is also dedicated to him and has stained glass featuring him. Curates Frs Gerry Courell and Peter Sharrocks in the 1970s, remember that there was an annual pilgrimage to the well from St Werburgh’s probably from the time Canon Murphy returned as the parish priest in 1959. When it ceased is unclear although in the late 1990s, Chester City Council archaeologists lead local children on a well dressing walk on the 2nd of August St Plegmund’s feast day. The children on arrival would informally dress the well inspired by the rags hanging nearby. This is said to have ceased in 2000,but according to stcolumbachester.wordpress.com a pilgrimage returned in 2016, The website states:

“On 11 Sept 2016, Fr Jonathan together with 11 parishioners representing 3 generations of St Columba’s and St Theresa’s parishes, revived the tradition of walking to the nearby well of St Plegmund.  It was a lovely warm sunny day for the 3.6 mile walk which is now mostly along the Millennium Greenway.  We said prayers at the well and were then welcomed with tea and chocolate biscuits by Mike, the verger to St Peter’s at Plemstall where we were impressed by the carvings mostly done by the Rev Toogood in the last century.   There followed a picnic in the historic graveyard before a leisurely walk back to St Columba’s.”

“THE annual tradition of well dressing is taking place in a Cheshire village this weekend. Volunteers in Mickle Trafford have been preparing the well dressing in the scout hut on School Lane in readiness for the blessing of St Plegmund’s Well ceremony on Sunday. Helpers include efforts by the Village Well Dressing Group, Mickle Trafford Primary School pupils and the Cestrian Scouts group. They have been providing decorations for the well and will transport their completed display from the scout hut to the well on Saturday in preparation for the ceremony. Only natural materials are permitted to be used within the display. The blessing of the well ceremony was originally intended to mark the new millennium but proved so successful it was decided to make the occasion an annual tradition. This year’s theme for the well is astronomy, with previous years’ displays based upon Alice in Wonderland, Hogwart’s Express and Creatures Great and Small.”

Themes varied from Royal Britannia to although this appears to have died out in 2010.

Sadly, no water flows through the well now said to be the result of a nearby Shell plant lowered the water table, but it clearly continues to be celebrated locally and provide a local connection to the age of saints. It is nice to hear of a village remembering its name’s original connection

This month theoretically we can start exploring holy wells again (within guidelines of course)…so hopefully for the last time I present England as an armchair journey.