This may well be the only ‘traditional’ surviving rag well in Wales the tradition of using only cotton strips predominate.

Red and white appear to be the main rags attached to trees around the pools. 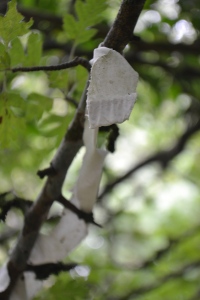 The  only  non  traditional  rag

Last month I introduced the rag wells associated with Lincolnshire we now move southwards to explore the other sites. 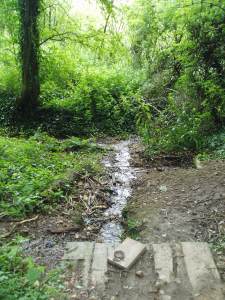 At the significantly named Hemswell are the seven springs apparently rise from the spring wells and one of these is dedicated to St Helen’s Well (SK 932 911). The site has an eerie but not unquiet atmosphere. The proximity of a local stone called the Devil’s pulpit may help this of course. It is a large approximately six foot high piece of sandstone under which a small spring arises. This Ian Thompson (1999) Lincolnshire Wells and Springs notes local opinion thought was St. Helen’s, he said it tasted sweeten than the other waters (a fact that I cannot testify as the spring has appeared to have almost dried up the year I went). Peter Binnall (1845) in his theories on eye wells notes that the spring wells were regarded as possessing curative powers and rags were hung on the surrounding bushes. The dedication of St Helen is an interesting one of course and just within the main area. Jeremy Harte’s 2008 English Holy Wells suggests that the name is spurious and that Ethel Rudkin (1936) Lincolnshire Folklore does not refer to it as such, however in support of the view I had no problem locally detecting the well using this name in the village (incidentally Harte makes an error referring to the springs as Aisthorpe Springs, these are clearly another site). There was supposed to be a chapel or church associated with the site, of which there is no trace or record. There was no evidence of any rags on any of the trees and the only thing hanging was a rope for a tyre swing!

Not far away and still surviving are the Aisthorpe springs (SK 956 899) a curative spring and a rag well, despite what Thompson (1999) notes is not now incorporated into a sewage farm, although this is nearby. The spring arises with some force near by the footpath which passes towards the sewage farm and has a separate flow from that of the plant. The spring flows from a pipe beneath some thorn bushes, sadly without any sign of rags.

To the east is Holton cum Beckering were to the east of Holton Hall was a Rag Well according to Lincolnshire Notes and Queries which was said to have had some medicinal qualities, however recent correspondence with local vicar has shown that there is now no local knowledge of this well. The only evidence was a local name for a field to the south of the town known as Well Walk. There is a spring fed pool in churchyard but no traditions are given concerning this. It is possible perhaps that this is the same site as the Wishing Well at Nettleton.

Here at Nettleton, the Wishing well which is records as being half mile from church, east of the grange on land belonging to Holton Park hence the possible confusion with above. Eliza Gutch and Mabel Peacock (1908) Lincolnshire County Folklore note that:

“It was famous for its curative virtues, and thither many of the afflicted, until very recently, if not now, were wont to make a pilgrimage. A thorn tree grew over the well, which used to be covered with votive offerings, chiefly bits of rag, the understood condition to any benefit being that whoever partook of the water should ‘leave something.’ The thorn tree, however, is now cut down.”

Again no local people could determine the existence of this site and nothing is marked on maps.

Kingerby Spa (TF 045 914) whose name first appears in 1824 as the site of a Chalybeate spring might seem an unusual place for a rag well but it is an old site. In Lincolnshire notes and queries state that large numbers of coins dating back to Elizabeth I, were dredged from the pool. Records tell that in 1900, pins and coins were found nearby, and the thorn rags were full of rags. Mr Wilkinson states that it became popular in Victorian times as a place to go for the healing waters and he had seen a photo of the spring with strips of cloth fastened to the bushes surrounding the spring but could not locate it.  He believed it fell out of popularity after the turn of the century, and suggested that the landowner was against people tramping over his land to reach it. However, as late as the 1990s, that the then owner was thinking of selling the waters. Mr. Wilkinson also noted that last time he saw the spa it resembled a pipe discharging into a dyke. This is at variance to Pastscape, which notes that the site consists of a small oval shaped isolated pool which has three courses of narrow brickwork forming a semi-circular rim with another brick course and a coping stone set into the side of the hollow suggesting that was a well house.  Despite appearing to exist as a small pool on both the current O/S and Google maps; recent field work failed to reveal it. The site would appear to have either dried up or purposely filled in. Field train channels were nearby. This was despite being described on the parish map outside the church, although interestingly this revealed itself to be in another location to that noted on the map so maybe I was pixy led.

The last traditional site is the chalybeate Blind Well (TF 085 208) on the edge to Bourne Wood is the furthest south rag well. However, there are no signs of rags now. Its water was used to cure eye complaints and sold in Bourne Market. It is now rather neglected being rather weed filled and untidy surrounded by a rather ugly wooden frame.

Thus completes the traditional rag wells but as I have eluded to before what is interesting is the site called  Lud’s Well (TF 176 937) at Stainton Le Vale. The evocative site is a spring which arises in a small cave like structure and fills a small pool. When I saw it in the summer it was a bit dry but apparently it forms a small waterfall according to local sources. I learnt of the site from Thompson’s 1999 work and when visited did not see any sign of ribbons. Now this is the county’s only rag well. This can be seen from this screenshot from a recent video visiting the site. Why?

The origin of the name may suggest why. Although it is believed to come from O.E Hlud meaning ‘loud’ others prefer to believe it is derived from Celtic deity Lud, this however is unlikely. Thus it seems very likely that the site has been adopted by the local pagan community who have adopted the attaching of ribbons as a pagan gesture.

So why. Such a cluster as far east as it is as possible to go puts in question the idea that the custom is strongly Celtic in origin perhaps. So why in Lincolnshire. A theory I discuss in my working thesis on the work is that the custom was brought by gypsy communities who had a stronghold in the county. However, why these particular springs is unclear perhaps like Winterton, Hemswell, Aisthorpe, Healing they were close to main roads  – we cannot state this in the case of the lost sites of course.

What is interesting is how quickly the custom died out in the county and one wonders whether this is correlated by the reduction in gypsy numbers as well.

In search of the Lady’s Well, Harthead, West Yorkshire

Holy well hunting can be a tough activity; covered in nettles, cuts, mud and water and still you may only find a boggy hole or concreted site. Even when it seems simple ie marked by a roadside it is not always easy. Therefore this is why it is important to search for wells in the winter month summed up by this comment on Geograph by a Humphrey Bolton :

“I had looked for this in vain several times, but was eventually informed by a lady of 90 years that it is under a hawthorn bush. After cautiously entering the bush from the side, removing a few nettle stems, I was able to take this photograph. Apparently it is opened up as necessary in times of drought, so there must be a stone slab under the twigs and soil.”

Thus in February I searched for the Lady well at Hartshead.

The Rev H. N Pobjoy in their 1972 ‘Story of the ancient parish of Harthead and Clifton’, states it may well have been here before the church which dates to 500 A.D in foundation. The author also states that it is possible that its waters were used by St. Paulinus to baptism local converts. The saint was based at Dewsbury so it is possible.  It is also said that the church of St. Peter is aligned to the equinoxes which may indicate some pre-christian observations at the site. In the churchyard is a venerable yew said to predate the church as well. One wonders whether the church was once dedicated to St Mary originally?

The Lady well is beneath the large hawthorn

It’s Kirklees so there must be a Robin Hood association

Not far from Hartshead is Kirklees were one can find Robin Hood’s grave. Therefore it would not be surprising to hear that no only did he use the yew tree in the grounds of the church for his bow – perhaps the famed one which he shot for the location of his burial – but he drank of the spring water.

In away the well being covered by the only large tree along Lady Well Lane means it is easy to find – well in winter anyway. As such I pushed back the branches beneath. The side closest to the road appeared to be closed over and covered in earth but I had heard that the site was a trough split in two. Jumping over the fence I found the other side of the trough and this was full of water. This was in line with what has been reported about the site being purposely closed up and only opened in times of drought. 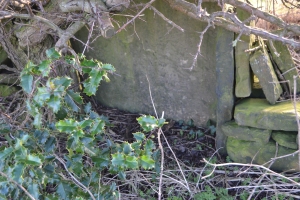 The closed up side facing the road

Val Shepherd in their Holy Wells of West Yorkshire and the Dales in 2002 notes that there was in 1925-7 a historical pageant enacted about the church and that the area was associated with Whitsun walks. She also draws an association with Walton Cross – a cross base – derived from O.E Wagstan meaning a ‘guide’ post and was on the boundary of Bradford/Kirklees and their may have been an association with the holy well. 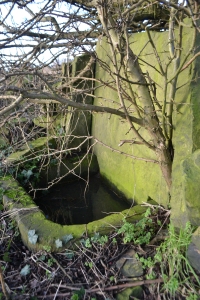 The open side in the field full of water

It would be good to see the Lady Well be restored as stated by Shepherd but at least as long as the lane is named after it it will be remembered and easier to find!