← Vomiting forth a pair of black toads in a quiet Kent back garden – St Eustace’s Well of Wye
Fons Scotiae – The well of Scotland, the well of monarchs →

Searching for the Holy Well of Battle, Sussex

On and off I have been surveying the holy wells of East and West Sussex which is an area which does not appear to have collected much academic interest. Thanks to myself and James Rattue Kent is now covered more than satisfactorily, ditto Rattue’s Surrey and now Dorset, Hampshire and Sussex in a way await further exploration. Thus it is possible that new and interesting holy wells maybe found in these counties, ones missed by Jeremy Harte’s 2008 magnus opus English Holy wells 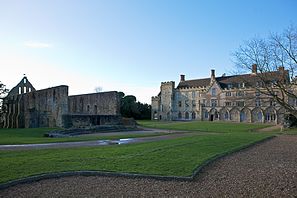 Battle is such a place. It is a place I have visited many times and thought there should be a holy well there and indeed there was. However, the Wishing, Holy or Dr Graye’s Well is described by one source  Her Grace the Duchess of Cleveland’s account of the History of Battle Abbey as:

“a square opening five or six feet wide, enclosed by a massive stone wall nearly seven feet high; a flight of steps led up to it on either side, and at each angle was what he called a vase, or receptacle for flowers and votive offerings. The spring was conveyed to the other side of the church wall.”

“On the north side of the Cloister Garth stood the Holy Well, from which some writers have derived the name of Senlac, given to this place by Ordericus Vitalis. It is mentioned in Queen Elizabeth’s time, as a place held sacred by recusants’ :-whither many, especially women, resort, like a young pilgrimage, and call it Dr. Graye’s well.’

Did this have an older history? The author suggests that its water gave Battle its old name of Senlac – possibly – but there is no evidence as such- and the origin of that name has itself been debated. What is more likely perhaps is that the spring provided the domestic water supply of the Abbey and later converted post Reformation as suggested above as a holy well needed to meet Catholic recusant use.

Who was Dr Graye?

The author continues to explain that Dr Grey was a priest, the Dowager Viscountess Montague’s chaplain, a zealous Roman Catholic, who resided  at the Abbey in Elizabethan times. He was imprisoned by Sir Francis Walsingham. He appears a likely person to concoct a holy well out of an available spring.

What happened to the well?

The author continues to record that:

“ It was afterwards known as the Wishing Well, and was unfortunately destroyed in the course of Sir Godfrey Webster’s alterations, in 1814….and now furnishes the drinking water of the household; it is remarkably sweet and pure, and we appreciated it for its own sake long before we were made aware that it was the charmed water of the old Holy Well.”

And so it disappeared into obscurity after perhaps a brief period of fame – a holy well of the Catholic faith in hiding and as such of great interest.

The real sacred well of Battle?

However, another claimant to have an association with the Battle of Senlac is still to be found. King Harold’s Well is enclosed in a circular well can be found in the front garden of Three Virgins Lane.

Local tradition records that the spring was drunk by King Harold before the Battle of Hastings. Whether it is originally a Saxon well is unknown it certainly does not look it. It is perhaps not the most attractive site but at least something remains to remind us of the days of King Harold.

← Vomiting forth a pair of black toads in a quiet Kent back garden – St Eustace’s Well of Wye
Fons Scotiae – The well of Scotland, the well of monarchs →