This chalybeate spring called alternatively by Bazeley and Richardson (1921–3) as Holy Well, whilst Walters (1928) calls it Holy Red Well (SO 848 153) arises incongruously now on the edge of a dry sky slope in a field called Red Well field.

“The Red Well at Matson consists of a 3ft. square limestone trough at the road-side, fed from a chalybeate spring in the field a few yards above it. The interior of the trough is 2ft. square by 1ft. deep, and its overflow is fed through a gargoyle into a semi-circular basin on the east side. Nearby are the remains of stones, which, if placed round the well, would give it the form of a Maltese cross. The spring belonged to the Canons of Llanthony, and its history dates from 1066, when Ralph de Mattesdon gave the church of Mattesdon to St. Peter’s Abbey Gloucester.”

records that it was also known as Edith’s Spring according to H. Y Taylor in 1866 who immortalised it in the Saint Harold the martyr – the Red Well at Matson or Edith’s Spring two local legends. He tells an interesting and possibly unique legend to describe its origin. Edith was an 18 year Saxon old local noblewoman from Upton St Leonard. She married an Earl, giving him a son, but soon after he was killed fighting King Harold. Fear what repercussions may occur as a result from the invading Normans she climbed Matson Hill. Here she decided to kill herself and son and as she dug a grave. As she dug, so arose the red spring water. She saw this as a sign and as a result dedicated herself to a holy living, she and her son becoming anchorites.  The well belonged to the Canons of Llanthony Priory, whose lands fell to the Selwyn family during the Reformation, whose coat of arms resembled a cross itself. “the presence of iron salts is considered as conferring tonic properties.”

and its water being very ferruginous was said to be “good for the eyesight” or a cure for tired eyes.                                         Another alternative name was the Rag Well and as such it was one of only two such sites in the county and certainly the most well-known. It is still overshadowed by a thorn tree, upon which tradition asserts clothes may have been left as a form of offering. However, the tradition has not continues or been revived. 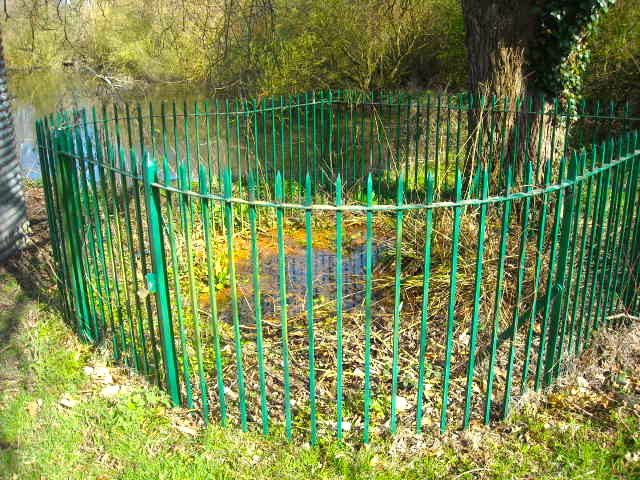 Enclosed in square railings, a reason perhaps why the well is no longer treated as a rag well. The spring itself arises in a square limestone trough of two feet by two feet and one foot deep inside and three feet deep outside. Another small receptacle, or basin a semi-circular one of Oolite stone is found on the east side. It then flows into a roadside trough. Walters (1928) notes that some slabs were located around this spring, which could be arranged to form a Maltese cross