Mysterious creatures of wells and springs – Mermaids of the Peak District

Mermaids are traditionally thought of as a marine phenomena but there are a number of freshwater accounts such as that noted in Herefordshire, three in Suffolk (Bury St Edmunds, Rendelsham, Fornham All Saints) and another in Gloucestershire at Timsbury. The peak district probably because of its remote and desolate landscape claims two!

The first is associated with the Black or Blake Mere a small pond of irregular shape, lying in a little hollow on the summit of the high hill of Morridge, about three and a half miles. from Leek in Staffordshire. The pond appears to have a reputation of being haunted. In the pages of The Reliquary, Camden quoting Nicham, says it is:

“A lake that with prophetic noise doth roar; Where beasts can ne’er be made to venture o’er— By hounds, or men, or fleeter death pursued, They’ll not plunge in, but shun the hated flood.”

Robert Plot in his 1689 Natural History of Staffordshire notes that:

“no Cattle will drink of it, no bird light on it, or fly over it; all which are as false as that it is bottomless; it being found upon admeasurement, scarce four yards in the deepest place; my horse also drinking, when I was there, as freely of it as ever I saw him in any other place; and the Fowls are so far from declining to fly over it, that I spoke with several that had seen Geese upon it; so that I take this to be as good as the rest, notwithstanding the vulgar disrepute it lies under.”

Neither account mentions a mermaid and it is unclear when this creature is first applied to the site. One of the first accounts perhaps is Charlotte S. Burne 1896 notes in her “What Folkore is, and how it is to be collected” in the North Staffordshire Naturalists’ Field Club, Annual Report and Transactions. Two origins for the existence of this mermaid are given. One account states that she was a women ,who during a stormy night was drowned there by her lover after he discovered she was pregnant with his child. Another story suggests that she was a witch and was drowned by the local people. It is said that as she drowned she cursed the person who accused her and days later he was found clawed to death in the pool.  Local people state that she can be seen combing her hair and enticing people to their death. She is also said to have warned locals who were draining the lake to check its depth by threatening to flood the local town of Leek – they subsequently stopped! 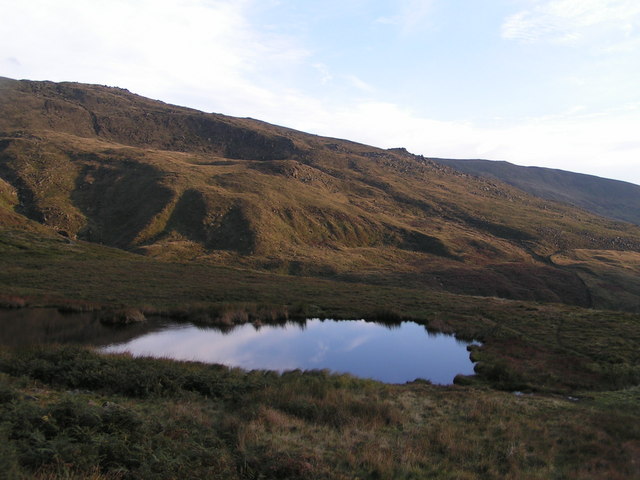 Perhaps the more famous of the Peak’s merfolk is found in The Mermaid’s Pool a mysterious pool at the foot of  Kinder Scout, a strange site which appears to be a relic of pre-Christian water worship particular  as the water is said to have healing qualities. Charles Hope in his 1893 Legendary lore of holy wells notes:

“There is a local tradition that a beautiful nymph ….who comes to bathe daily in the Mermaid’s  Pool, and that the man who has the good fortune to see her whilst bathing will become immortal.”

It is likely that Hope is sourcing Henry Kirke’s 1869 article “The Mermaid’s Pool” in The Reliquary notes:

“At Old Oak Wood, near Hayfield, Derbyshire, is the Mermaid’s Pool, where a beautiful woman is said to enter the water every day, and whoever has the good luck to see her will become immortal and will never die.”

Hope records a tradition of someone who had seen the mermaid thus:

“The old folk of Hayfield, moreover, have a long story of a man who, sometime in the last  century, went from Hayfield over the Scout, and was lucky enough to meet this mountain  nymph, by whom he was conducted to a cavern hard by. Tradition adds that she was pleased  with this humble mortal, and that he lingered there for some time, when she conferred on him  the precious gift of immortality.”

The best time to find visit the Mermaid’s Pool is midnight on Easter eve when she could favour  you with your wishes, but if she did not favour you she will drag you to your death!

It is possible of course that local production of methane gases produced willo-the-wisps which were seen as the mermaid but that would ruin a good story would it not? Or perhaps you might argue that someone caught the said mermaid and put it in Buxton museum! – go along and have a look!