If I was to be asked ‘take me’ to a classic holy well, one which had that romantic and mysterious feel and remained in the 21st century still a place of solitude and contemplation, one site I would suggest is St Cuby’s Well at Duloe. Throw in the fact nearby is the presence of an ancient church and a unique quartz stone circle and the site certainly has its attractions to the antiquarian. 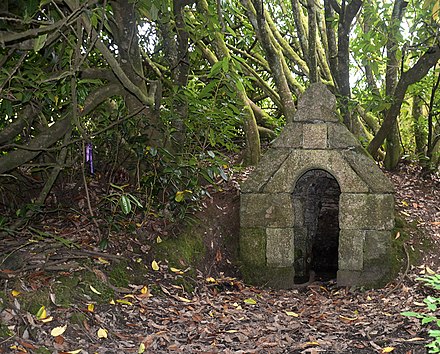 In Ancient and Holy Wells of Cornwall by Mabel Quiller-Couch (1894) tells us:

“In the parish of Duloe, on the road which leads from Sandplace to Duloe Church, at one time stood the consecrated well of St. Cuby… The well of St. Cuby was a spring of water on the left hand side of the above road, which flowed into a circular basin of granite, carved and ornamented round the edge with the figures of dolphins, and on the lower part with the figure of a griffin; it is in shape somewhat like a font, with a drain for the carrying off of the water.”

The well is first mentioned in land documents appearing as La Welle with the valley Kippiscomebe according to Lane-Davies being Cuby’s combe being originally Cub’s combe.

Why was St. Cuby?

St. Cybi (Cuby) founded a monastic settlement within ‘Caer Gybi,’ being born 480 AD at Callington near Plymouth. His father was a Cornish Chieftain and great grandson of Cystennin Gorneu, King Arthur’s grandfather. He was a well connected saint, his mother Gwen, was sister of Non, St. David’s mother. He decided not to follow in his family footsteps and being a chieftain and so became a Christian monk travelling to Gaul establishing religious centres with his disciples. He returned to Cornwall settled at Tregony living in a cell next to a well. Quiller-Couch (1894) notes:

“This saint, who has been called also Keby by some of his biographers, was the son of Solomon, a Christian king or chieftain of Cornwall. According to the Rev. S. Baring-Gould, Solomon was a son of Geraint, and his wife was a sister of St. Non. St.Cuby at an early age gave himself up to learning and religion ; he renounced all claim to his father’s kingdom, to which he undoubtedly had the right, in favour of his brother’s family, and settled at Tregony for a short time, after which he visited Ireland, and finally went to Anglesea, where he died.”

Traditions of the well

According to Helen Fox in her Cornish Saints and holy wells the well’s water cured TB, Scurvy and rheumatism although I am unsure where this piece of folklore is derived from. The most well-known piece is quoted by Quiller-Couch wo states that:

“The well at one time was very much respected, and treated with reverence by the neighbouring people, who believed that some dire misfortune would befall the person who should attempt to remove it. Tradition says that a ruthless fellow once went with a team of oxen for the purpose of removing the basin ; on reaching the spot one of the oxen fell down dead, which so alarmed the man that he desisted from the attempt.”

In Mrs Peel’s Our Cornish Home, it is said that the basin was broken when it was rolled down Kippiscombe by drinken workmen and it came to rest beside a cottage of an old lady who heard the Piskeys laughing over it all night.

“In spite of this tradition, however, the basin has been moved, probably when the new road was cut, and was taken to the bottom of the woods ‘on the Trenant estate ; it is now placed in Trenant Park.”

This story of the well is told in more details in In the Old Cornwall Journal of April 1928 the story is told that so strong was the superstition attached to the basin that when the squire (Wm Peel d 1871) wished to move it into Trenant Park for preservation about 1863 he had to pledge himself firmly to provide the pensions for the families of any who fell dead before the carters would took the stone. Of this font one now must travel to the church being returned in 1959 when it returned to the parish. It is a remarkable relic with a snake, griffin and dolphin on the bowl’s rim. It certainly looks pre-medieval.

Recently as it spreads across Cornwall (and beyond) the well have become a rag well or as it might be called locally clootie well.

The well is made of granite ashlar with a gabled end and roof constructed of large blocks of granite with a rounded head arched entrance with an ancient Celtic cross above the door. There are two cells the outer one has a stone seat but its a cramped location to wait. The inner well house is built into the bank and has a round-headed arch to the inner well house room which has corbelled walls and a flat stone roof. The well is  thought to be 15th century but its present state owes to be restored by a former Rector The Rev. Dr, Barrington Ward around 1822 when the nearby road was built and remains a delightfully well preserved granite well chapel. Despite being close to a road it is a peaceful spot shrouded by bushes and resembles a grotto where within you can be devoid of the world outside as it is dark; very little light penetrates through! The water now seeps from the side and flows into the floor of the second chamber. It is clear and flowing although it had a dead mole in it! Despite this it is a remarkable place.